Eight couples that had top notch décor at their ceremonies

The effort with which couples invest in their wedding décor keeps growing day by day.

Wedding decoration is one of those top aspects that will determine the beauty and colorfulness of your ceremony. No matter how beautiful the venue of the ceremony is, if the décor isn’t chosen carefully, everything will be completely ruined.

The couple walked down the aisle at Life Church, Namasuba and later hosted their guests at Mestil Hotel in Nsambya, Kampala for the reception.

It being an outdoor ceremony, the couple decided to hire a big skyline tent that could cater for all activities taking place on that day.

Skyline tents are famous for being transparent, which gives an opportunity for having natural light and still be safe from the risks of rain or the scorching sun.

The couple also opted for a theme colour of white and gold with a touch of green bringing out a natural feel.

To add beauty to the ceremony, a mixture of white and peach roses were used to adorn the tables and the floor.

The tent was also decorated with different types of chandeliers with some having green leaves running through them.

When it came to the couple’s sitting area, it was decorated with gold plated pillars and white roses hanging at the top making the entire moment feel like a real fairy tale.

The couple wowed us with their sense of style and taste as they opted for a unique kind of décor.

Right from Rubaga Cathedral where the couple renewed their vows, the place was filled with white roses and palm leaves beginning from inside the church to the entrance itself.

The unique touch matched perfectly well with the couple’s outfits as they stood amidst it.

As they proceeded for their reception at Speke Resort Munyonyo, the couple opted for a silver-like ground walkway that had rose petals sprinkled all over it.

The sides of the walkway were also decorated with different kinds of plantations boosting the natural feel of the venue. The walkway was designed to look-like a scene from the movie Crazy Rich Asians

It being an outdoor wedding, the tent too was filled with beautiful natural plantations and roses, which made the ceremony, feel like a beautiful nature park.

The couple’s high table was also decorated with white roses with some green leaves that were flowing all the way to the floor.

Otteran Varsity, 29, a Billing and Prepaid Systems Supervisor at National Water and Sewage Corporation, Kampala and Charity Amutuhaire, 28, a finance and Administrative Officer at Integrated Transport Solutions Limited tied the knot on June 22, 2019.

The Church ceremony took place at St. Augustine’s Chapel in Makerere University and thereafter the reception at Sharing Hall, Nsambya.

The couple had an indoor ceremony which they filled with hanging chandeliers having different leaves decorated around them giving the ceremony a feel of a real Disney movie.

The chandeliers also had good florescent lights that lightened the mood of the entire ceremony.

The couple’s sitting area was also decorated with white roses at the back designed in circular patterns.

Green leaves were crawling off the high table as a mixture of white and orange roses were put at the top of the table making the entire place feel like a beautiful forest park.

In May 2019, Pius Kavuma Mugagga and his lovely bride Mugimba, had a lovely outdoor wedding without tents.

The ceremony took place in the gardens of Ndere Cultural Centre on Kisaasi road. 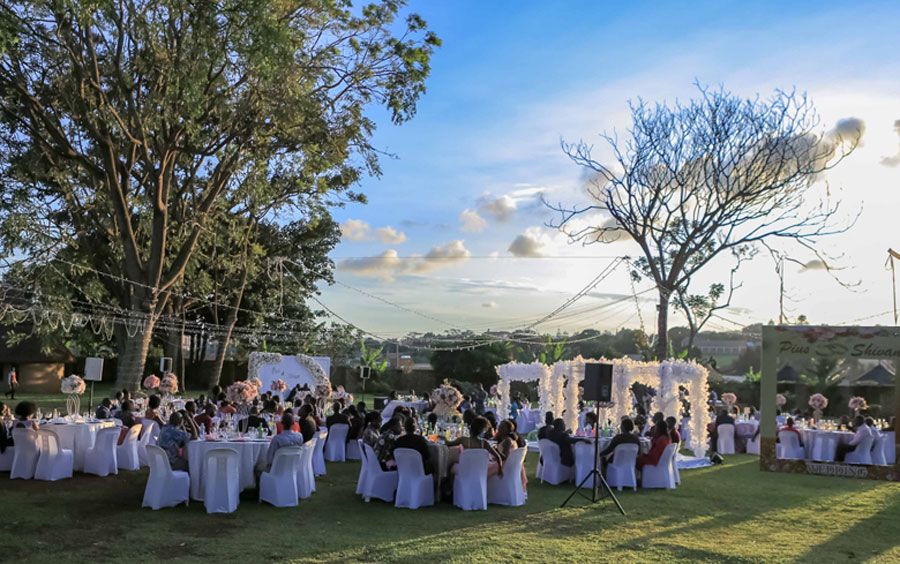 Since the gardens were already filled with decorated walkways, the decorator just simply added some similar flowerbeds with sprinkles of white tiny flowers to make the walkway longer.

A long whiteboard covering the grounds from the high table was placed to the entire walkway to make give the moment a special celebration feel.

Mugagga says the white decorations surrounding the walkway were part of their theme of having an angelic atmosphere and they indeed pulled it off.

Small fairy lights were placed to run across the venue which made the place look more dazzling.

The couple opted for a pinkish white theme that gave their venue a classy feel.

The guests’ sitting area was organised in small circular sections where a given number of people would share different round tables making the venue look neat and have more space.

For the couple’s seating area, a whiteboard with golden patterns cutting across each other was placed at the back with initials of the couple’s names right in the Centre.

Pink and white bouquets of flowers were also placed side by side forming a delightful kind of walk way for the couple and its guests.

We all fell in love with musician Rema’s décor right from when she threw a splendid one of a kind introduction shower. The venue of the introduction shower was decorated with a long table that had green, white, and golden flowers placed on it with long golden chairs on its sides. 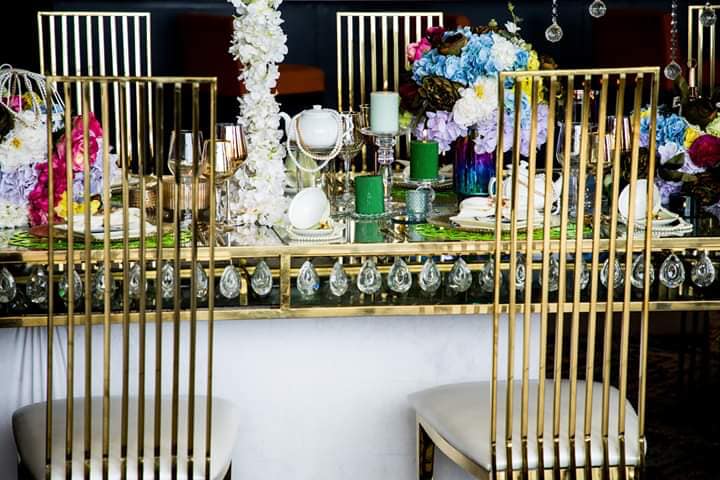 The décor was complemented by coloured glasses on the table that brought about a mood of celebration.

The décor also consisted of long drapings and flowers which made a perfect picture environment. 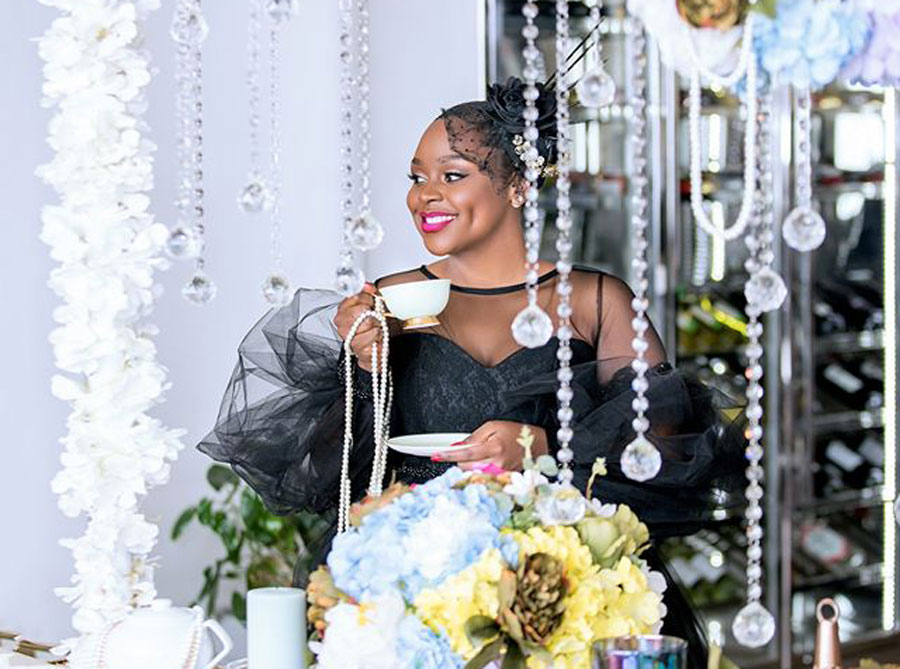 When it came to the kukyala ceremony, the couple decided to go for a two theme décor.

The first theme had maroon and pink colours with a small touch of green.

A booth personalized with the words ‘hello Hamza’ was decorated with pink and maroon roses that had green leaves running through them. 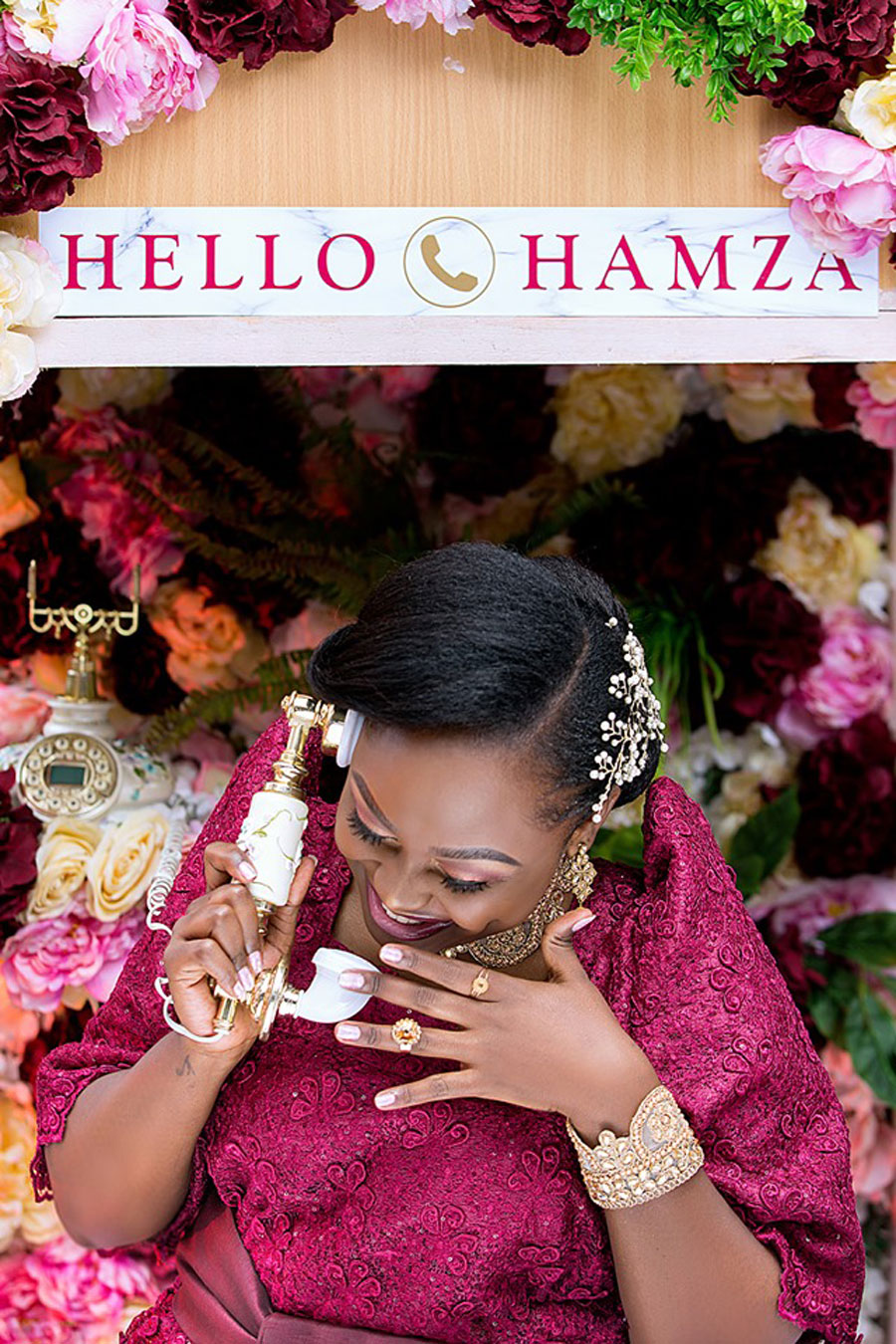 The songbird also wore a maroon gomesi in which she posed in the booth trying to give a call to her husband to-be to arrive on time.

The same theme was used in doors where the family members were supposed to greet their guests from.

After the official ceremony, the couple decided to enjoy some time with the invited guests.

The celebrations were done outside in a tent covering it with drapings of charcoal grey and crystal chandeliers to add a touch of elegance to the ceiling.

This was considered the second theme.

The glass dinner tables had gold stripes around them accompanied by smoky grey chairs with soft wool to make the whole setting look royal.

White bouquets of flowers were also placed on the tables making them look more beautiful.

To add variety to the table, the wine glasses with neutral colors were mixed with dark blue ones to kill the simplicity that would have come with one color.

Besides them were big round silver plates designed with gold crystals.

The plates were used to carry a card with personalized names of the couple and a special message from the bride to the groom-to-be.

Then next to them were white dinner plates with gold cutlery.

The entire kukyala set up made us more anxious for the introduction ceremony and the couple didn’t disappoint us at all.

They kept their introduction décor simple and elegant. A large tent was set up right outside their house and was decorated with black and white theme colours.

The tent had a mixture of crystal and white draping. 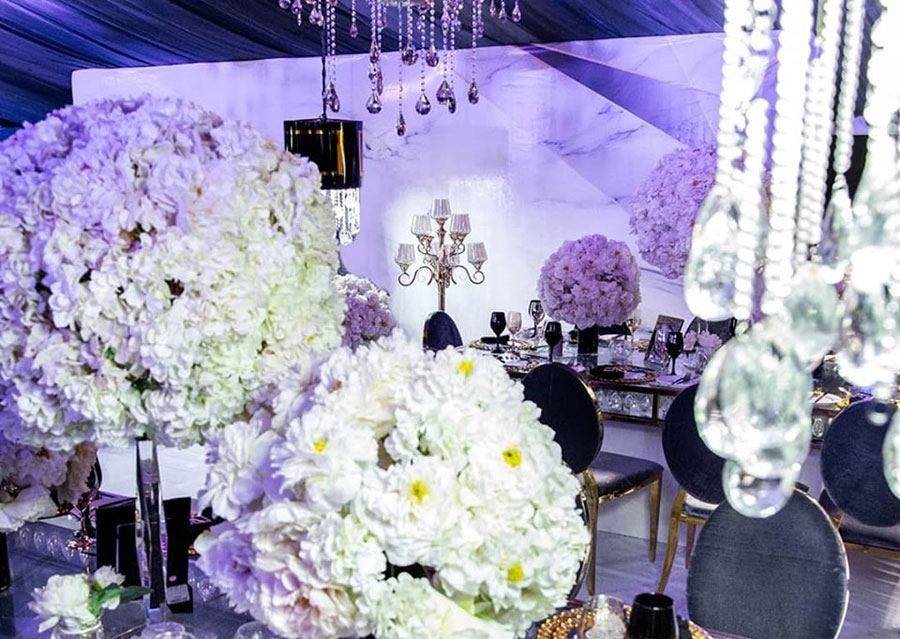 When it came to the chairs, one side had plain white chairs well as the other side had multi-coloured chairs of black and white.

The tables were decorated with large white flower bouquets giving the event an angelic feeling.

The tent was also decorated with white chandeliers that had gold strips around them. 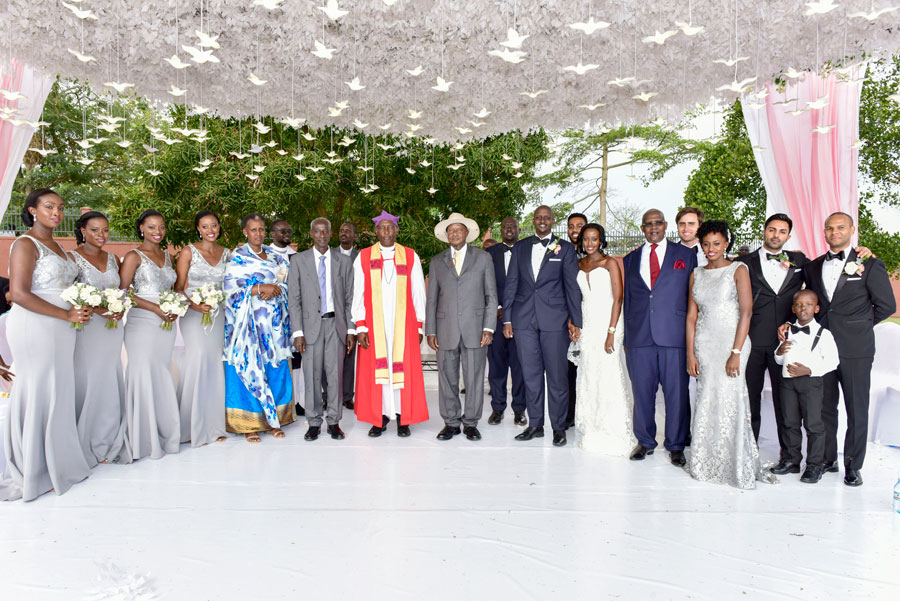 The couple had an outdoor event that took place at Munyonyo peace hub were guests like His Excellence the President of the Republic of Uganda Yoweri Kaguta Museveni, and other politicians were present. 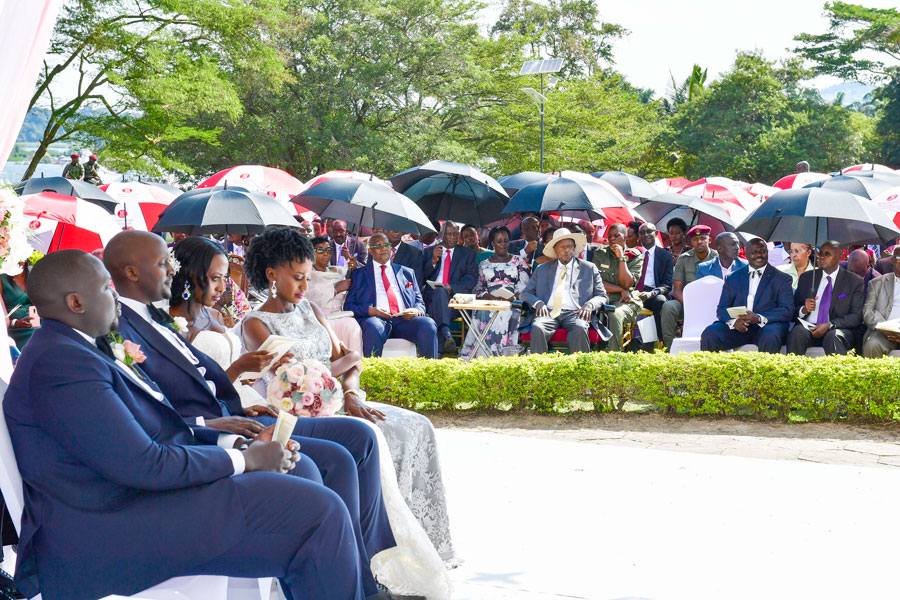 All guests were given umbrellas to shield themselves from the scorching sun which looked beautifully unique.

The couple’s sitting area was also decorated with small bird-like drapings floating in the air.

This Dubai based couple hosted their kwanjula at Munyonyo Common Wealth Resort and the event turned out to be a glorious one.

The couple opted for a white theme with a slight touch of peach and some gold.

They had a mixture of White and peach roses and long drapings were used to decorate the different areas of the venue.

The couple also had magical chandeliers that made the entire place feel like a palace. The groom and his best man sat behind a gold coated table that was filled with bouquets of flowers.

African baskets were also decorated around a poster that had the couple’s names.

2019 had couples put extra effort in their décor so as to have events of the century and indeed, most of them lived their dream.

Julie Angume’s groom turns up for their second kwanjula

Fashionable bridesmaids’ dresses for a 2020 bride