The celebration that took place on Friday lasted three days and was attended by friends, family and fellow celebrity stars including Nigeria’s Davido, who entertained the guests. Davido’s performance was secretly organised by Idris to surprise wife, who loves the Nigerian’s music. 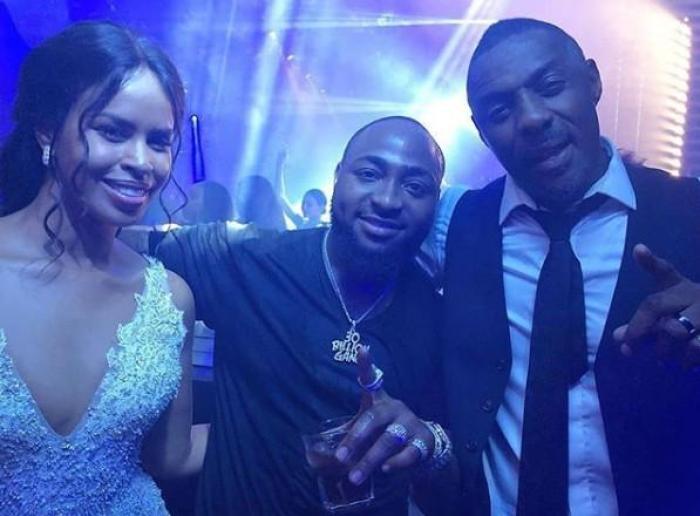 Davido’s performance excited guests at the event and got many white men jiving to his Afro-pop hits. His performance did not leave the lady and man of the day seated as they also stood to dance to the beats.

Press play ▶️ Sum up ? @idriselba ?? ?? @sabrinadhowre wedding .. #africatotheworld??? beautiful, blessed, joy for them ?????? bride and groom grooving …. his video has @louboutinworld creator #redbottoms like, “am going to show Afro Pop king ?@davidoofficial how to move in them shoes “. It’s a classic one …. OBO unifier . Dance : red bottom dance by OBO and Louboutin Song : “the money”Davido and @baddosneh produced @kiddominant

The wedding was exclusively covered by The Vogue magazine and a few pictures released on Saturday. Other pictures shall be released in their July magazine.

Congratulations to newlyweds #IdrisElba and #SabrinaDhowre who exchanged vows in Morocco on April 26 2019. Celebrations were spread over three days in Marrakech. See more in the world exclusive in the July 2019 issue of #BritishVogue. Photographed by @SeanThomas_Photo.

Idris Alba who has been married twice before met Dhowre on the set of “The Mountain Between Us” in 2017. The following year, Elba surprised Dhowre by popping the question at a film screening in London.

Dhowre is an American model and was named Miss Vancouver in 2014. Idris Alba was named People’s “Sexiest Man Alive” in 2018.

Some fans have expressed heartbreak over the wedding of their crush.

Everyone rn after finding out Idris Elba got married even though none of us ever had a chance with this man?? pic.twitter.com/bA184QAOft

me finding out Idris Elba got married even though he doesn’t know I exist and I had zero chance of ever being with him. pic.twitter.com/iORmtFrYik

Others were more congratulatory of the couple.

This photo is everything! She’s so beautiful, Idris Elba is the lucky one ??? pic.twitter.com/uWK8yU3Lxz

What a stunning couple???????
Congratulations Mr. and Mrs. Elba!!✨✨✨✨✨✨✨✨#IdrisElba pic.twitter.com/1exEBNTjcV

I used to adress him as uncle

I used to adress him as uncle

8 stylish gowns for a soon-to-be bride