I proposed through a phone text message

Alex: I met Jackline in 2013 when I had gone to buy a laptop. When I saw her, I liked her but I did not say anything. I only requested for her phone number and I kept calling her.

Jackline: After taking my phone number, he kept on calling me about laptop issues and it was only seven months later, that he revealed his feelings for me. 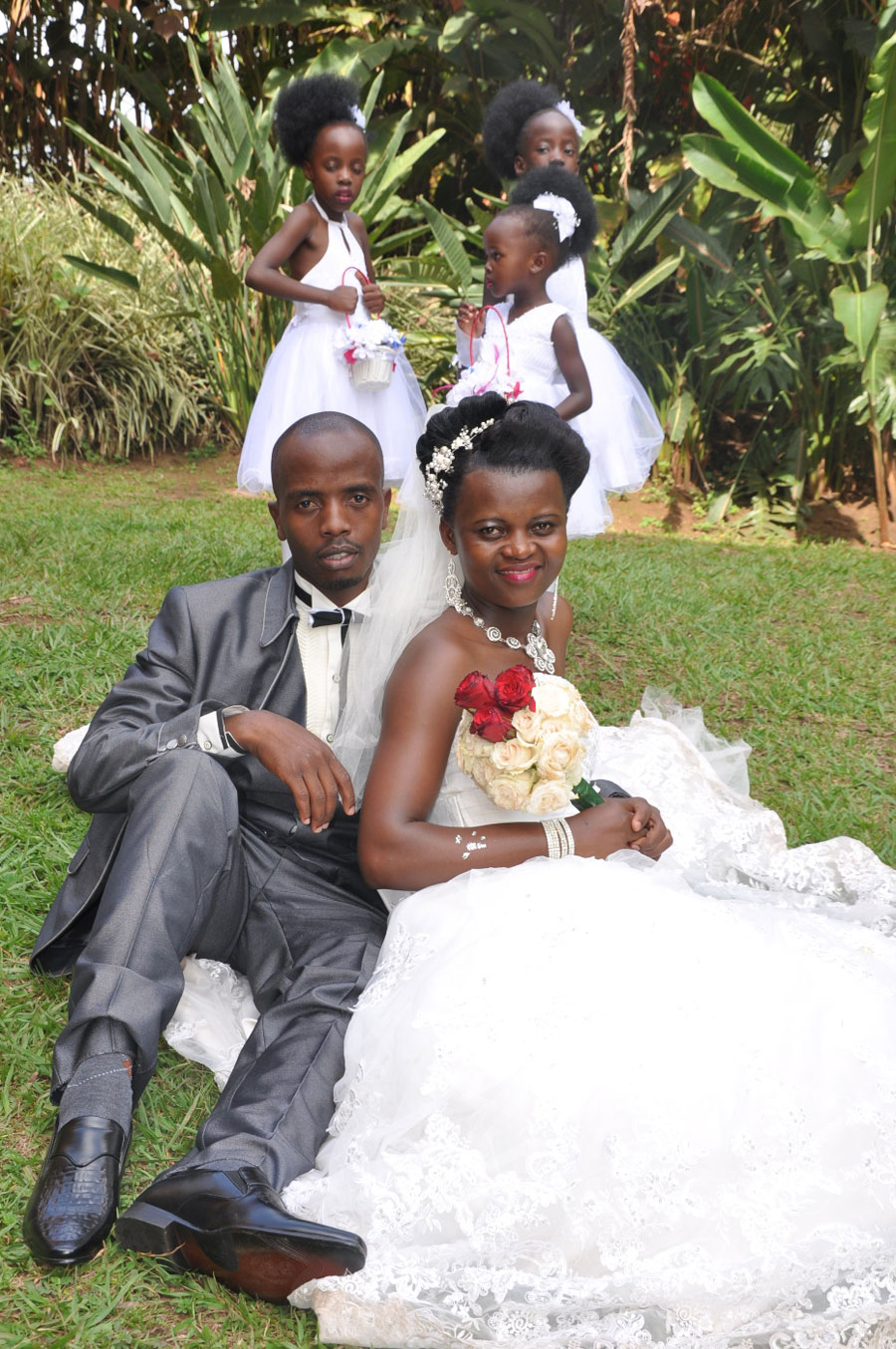 How old were you and what attracted you to each other?

Alex: I was 26. Jackline is beautiful and smart. Her conversations were reasonable, honest and she is understanding. This is what I was always looking for in a wife.

Jackline: I was 24 years old and Alex pursued me until I got attracted to him and fell in love with him.

So, when did the two of you become close?

Jackline: It was around May after I had completed school. He reminded me of how I had promised to get married after school.

How did you propose to Jackline?

Alex: Through a text message that read, “How are you dear beautiful? I miss you. What is your WhatsApp number? I lost my phone with all contacts. I love you. Do you have room for me? I’m serious, I want to marry you not just love please.” However, she never responded instantly until one night at the weekend when I saw her reply, “Yes”. I was elated and felt I had reached my goal.

Jackline, how did you feel?

Jackline: It took me by surprise. First of all, I was still a student and I thought he was not serious because we had not dated for long. But the fact that he had persisted, I told my aunt and we prayed about it and the next morning she told me Alex was the right person. I used to share with her on several occasions when someone tells me he loves me but she would not take an initiative of saying let us pray about it. I sent him a hello after the proposal but he was not online. After a while he also sent me a hello, we were on chat and he asked me: “Ahaa how far with my request? It is true I love you and want to marry you.” I accepted his proposal. 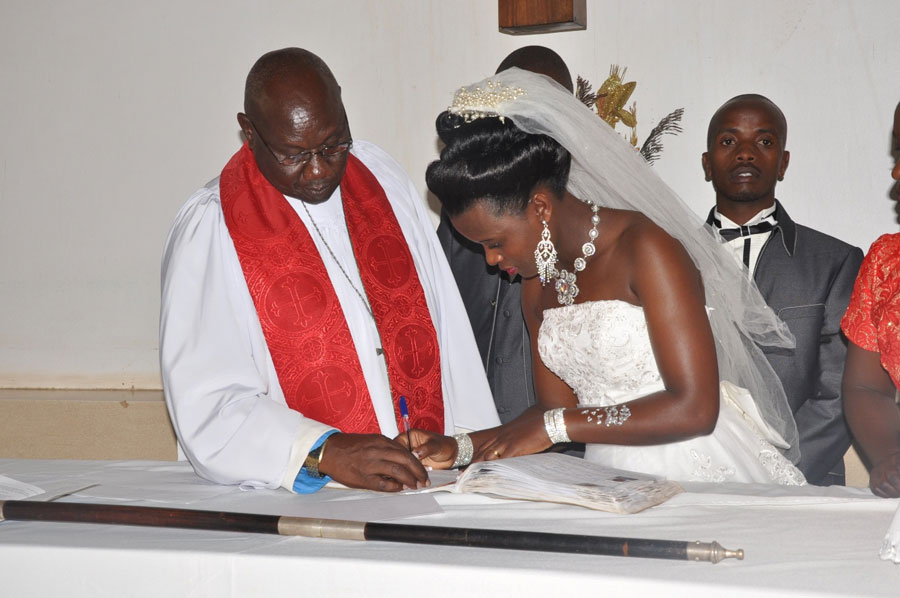 How long did it take to prepare for the wedding?

Alex: It took us two years. I knew from start how weddings needed time during preparation if you do not want things to get messed up.

How did you come up with the wedding date?

Alex: After taking two years of preparations we settled for December 10 2016, to be our wedding date and we wanted to start the New Year wedded. 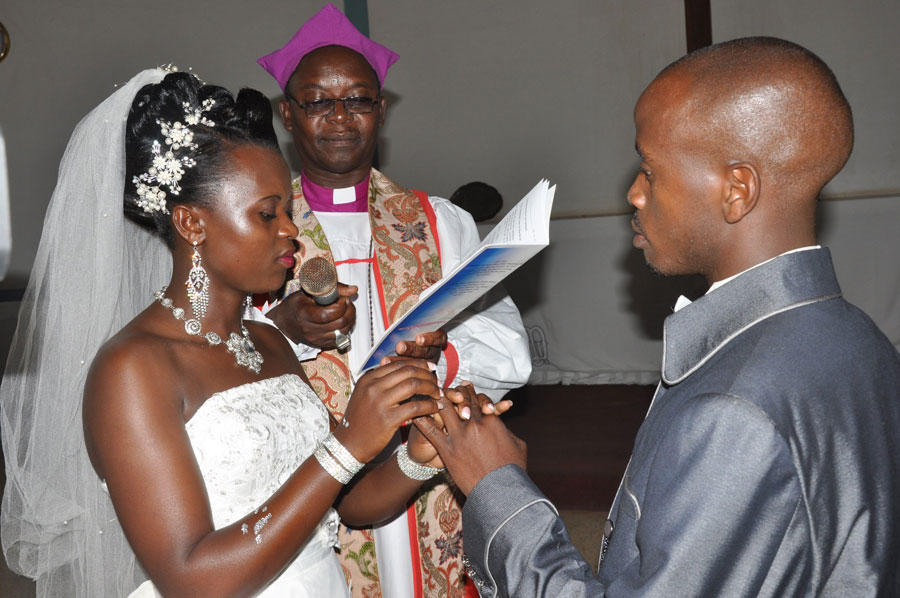 Alex: Shs25m and to get that money, we held wedding meetings and also got contributions from our families and friends.

What was the most costly item and where did you buy it from?

Jackline: Food because we had between 500 and 600 guests.

Alex: Yes, we did but he did not do most of the things and he only gave us insights basing on his wedding preparations. 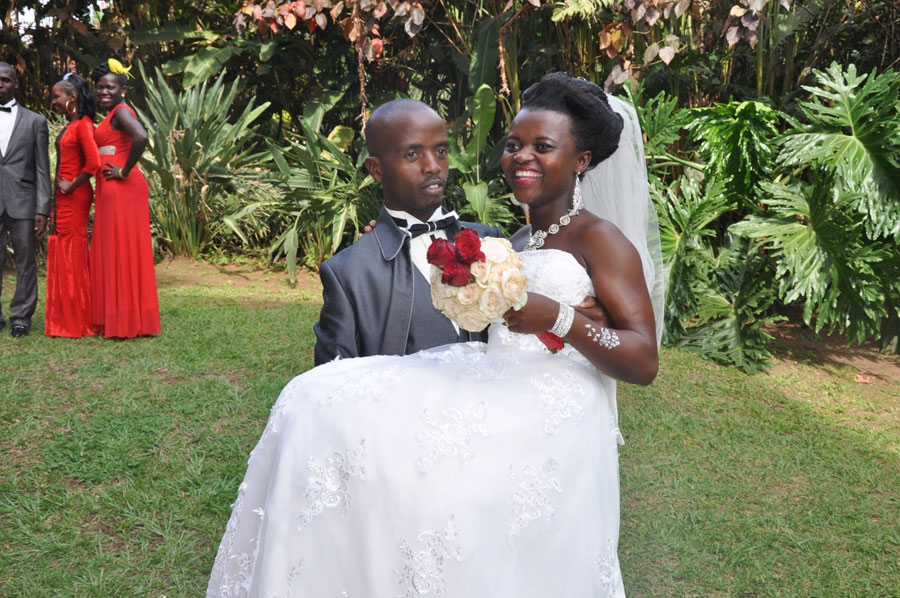 How did you come up with a guest list?

Alex: We made calls and sent text messages to friends and families to confirm their attendance before printing the invitation cards. We printed invitation cards for only those who confirmed.

Jackline: I was having my hair styled and my nails polished and double-checking with service providers.

Alex:  I was relaxing since the wedding was to take place the next day.

Alex: Yes we did, we were advised on things such as the importance of communication and finance in marriage.

Jackline: I learnt a lot from it especially how to handle and treat my husband. We were told that things such as being patient, sorry, honest, forgiving, and understanding each other are essential in marriage stability. 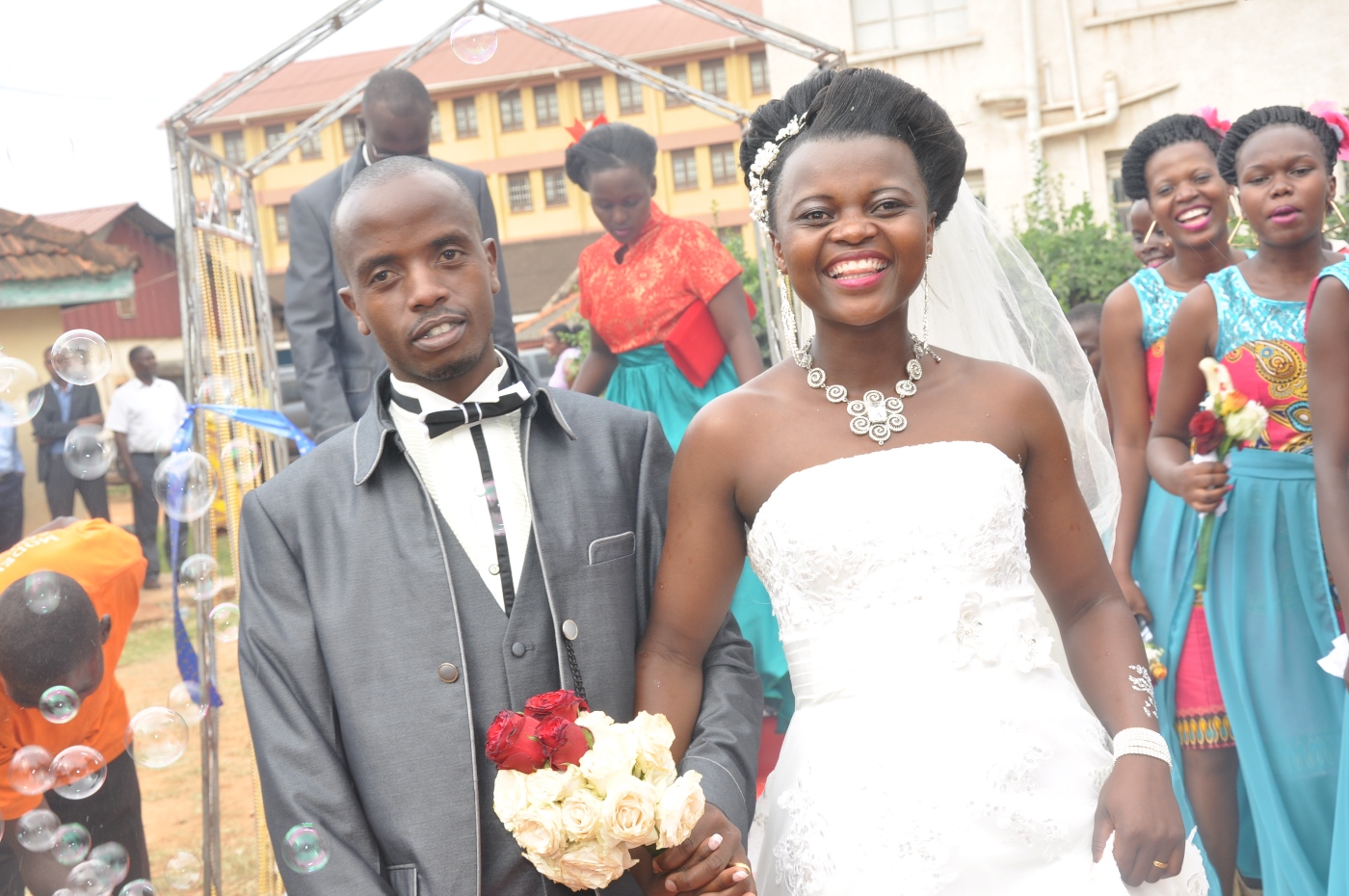 Did you think of going for honeymoon as vital?

Alex: Yes, because as a newly wed couple you need ample time together. We went to Lucia Villas in Mbale Town.

Alex: I bought from the streets of Kampala where they sell suites. Changing clothes were made from Blessed Designers (Aunt Esther’s place) on Republic Street Mbale for all of us including the maids and the groomsmen.  And all around Shs1-2million. 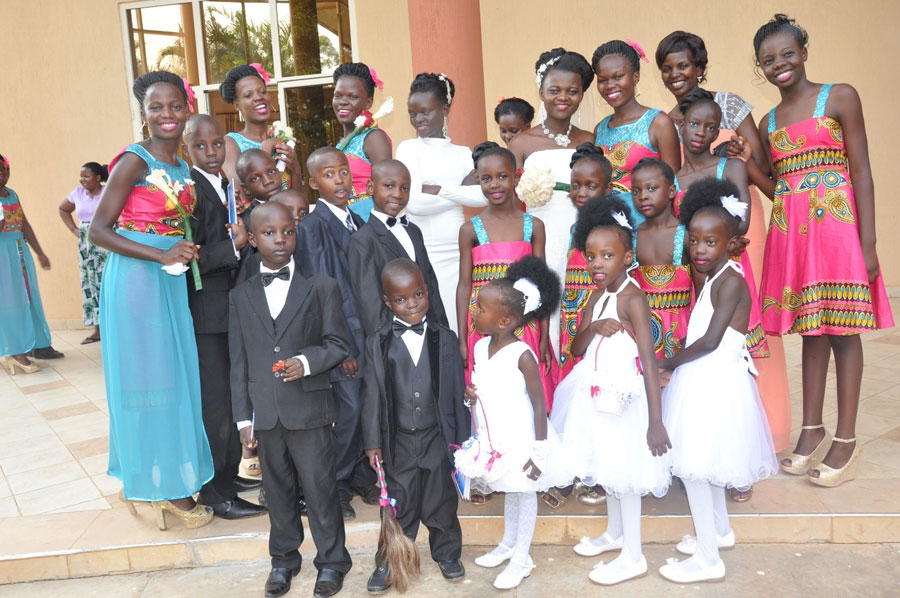 What was the theme color?

Our theme colors were Pink and blue

We first thought we would hire a hotel to deliver but later realised it was expensive. So we cooked our food.

What were your favourite moments during the wedding?

Alex and Jackline: The church. Most people always prefer attending the reception but the church was full from the front to the back which does not happen regularly.

Who were the matron, bridesmaids and why? 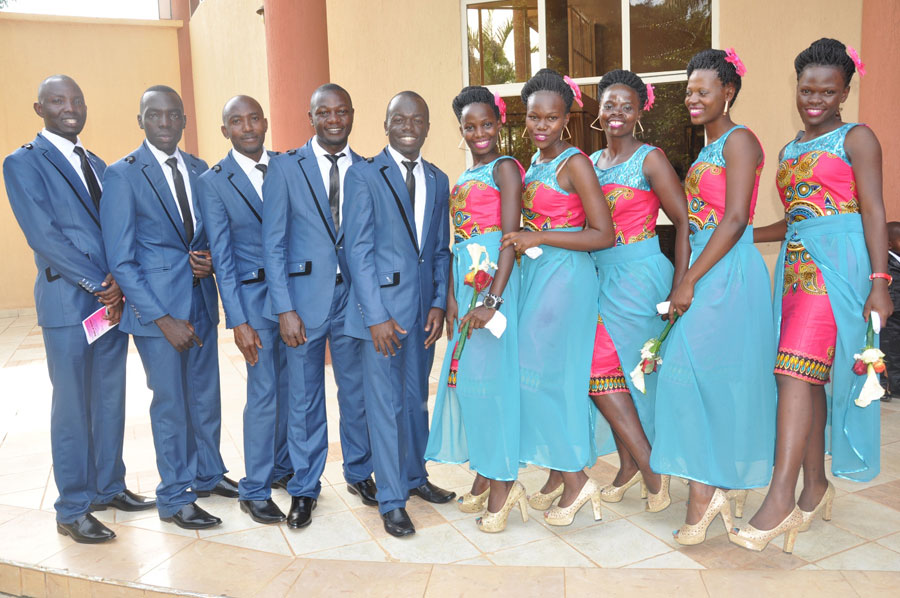 Alex: Our Matron was Daina Manake Matembu. Since Jackline started working, she has been the best caring friend ever. She is also motherly and that’s why Jackline chose her to be her matron.

Bridesmaids: Mutonyi Phiona, Joy, Caro, Esther, Blessed and Linda. We chose them because we knew them as friends and they were also in position to foot their own bills as support to our wedding.

What did you learn from your wedding?

Most importantly praying and trusting God leads to so many good things that you can’t expect. We learnt that early planning, having good relationships with people and delegating some people to work on your behalf leads to success.

What is your advice to those wedding soon?

They should set dates of their functions with confidence, pray to God and plan early for their function. Sometimes they should follow their hearts; people can somehow discourage but you have to move on.

How did you both of you choose your service providers (photos/videos/salon etc.?

We had been involved in other peoples wedding functions so we also used the same service providers because they were doing a good job. 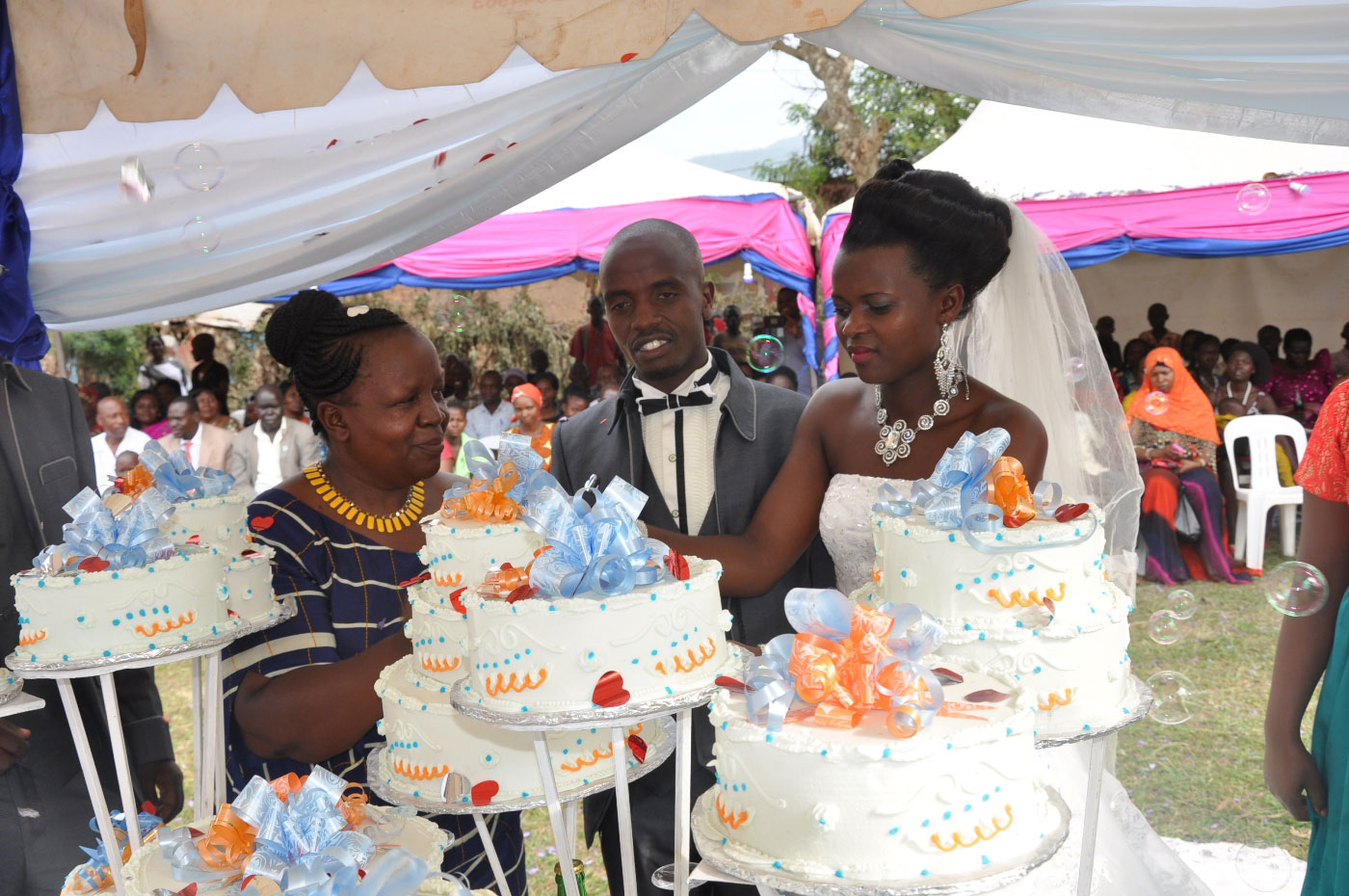 How to get a good partner