Religious dilemma: We settled for a mixed marriage

Religious dilemma. Since 2005, differences over religion and which church to wed from dragged John Ogwok and Consy Akello. In January 2020, the couple opted to settle for a mixed marriage.

Consy Akello met John Ogwok in 1998 when she had just sat her O-Level exams. John was a clinical officer at Lacor hospital at that time and he was searching for a wife. His friend and workmate told him about a charming young lady that could suit his taste.
With John in tow, the friend who doubled as a friend to Consy’s mother, went to visit at Gulu referral hospital quarters. John and his friend asked Consy about her mother, who was at work but they left without meeting her.
“The following morning, I was alone at home and John returned. He proposed to marry me,” recounts Consy. The rest of the story is in the excerpts below.

The proposal
John: The following day I returned to Consy’s home and met her since she was in her vacation and always stayed home by herself. I then proposed to her.

How did you react?
Consy: I did not like him initially and I first turned down his proposal. I doubted his capability to handle a marriage.
I rebuked him and kept bouncing him for more than a year until I gave in because he over bothered me to the extent that he would follow me up to school. Sometimes he would come home where my parents and siblings would disgracefully chase him.

What attracted you?
Consy: While he pursued me, I realised later that he was sincere because he was frank about his family and home, including how his former girlfriends disappointed him. He is also hardworking and humble.
John: She was such a bully and always ran away from me but every time I went to their home, I found her busy and I was looking for a hardworking and devoted woman. By the way, teasing and rebuking me meant she wanted to understand me more. I gave her time because she was beautiful but tough.

Did you have courtship?
Consy: Yes, because when I joined Christ the King Primary Teachers College in 1999 that was when I said Yes to him. We courted until 2003 when we had our traditional marriage.
John: I think it was unnecessary because my workmate who was an elder and a woman, had recommended Consy and I trusted her recommendations. Therefore, I was ready to marry her as fast as I could.

Were you ready for Holy Matrimony?
John: I always wanted to put God first in our marriage making matrimony vital since I am a former seminarian but moved on to pursue medicine. Although we did not have the resources, I was determined to marry her.

Consy: Yes we wanted to have our wedding in Aywee, Gulu in early 2000 but the difference in our religious beliefs and jobs kept us postponing the wedding until last year when we tightened our belts. We even proposed a date in 2018 but telling our family was hard because each one of us felt unprepared.

Religion factor
John: It was a contentious matter between us to decide which church we were to wed from especially after we met Archbishop Odama and he set our wedding date.
It was hard to convince her to convert to Catholicism before the wedding because she is a staunch Anglican and, I also did not want to convert. Luckily, when we consulted Archbishop Odama, he recommended a mixed marriage.

Consy: Religion was not a big problem because we married well-knowing about our religious backgrounds and I knew if I changed suddenly, it would affect us and our children.
During a marriage retreat and premarital counselling, they told us about the Catholic doctrines that required me to convert but I chose not to convert.
We were only able to go over that hurdle once we returned and compromised to settle for a mixed marriage where we would tie the knot in the Catholic Church but I would continue practising my faith as an Anglican.
However, time will come and I might eventually cross over to John’s faith and church. For now, I have asked my husband to give me time as I decide and soon I will join him. 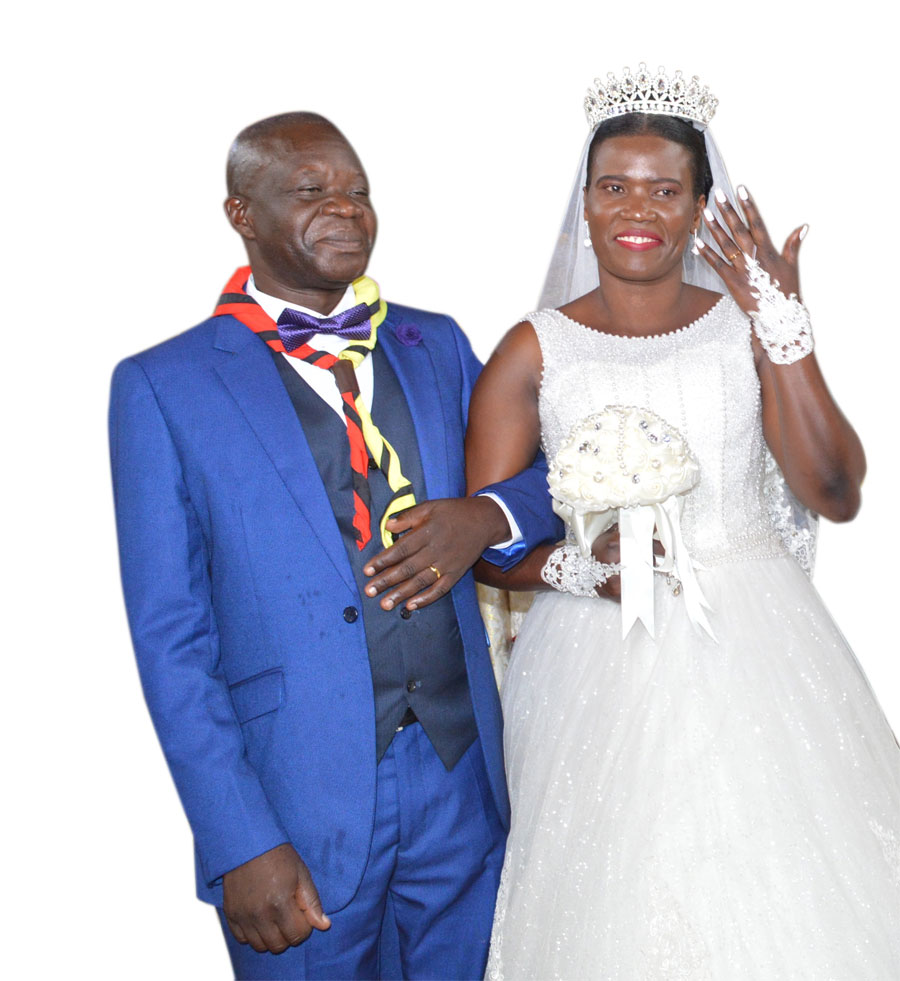 The plan
John: When they fixed our date, we did not have a cent but we immediately formed a committee and different groups to engage friends and relatives about the planned event.
Our budget was Shs81million. Food alone cost us Shs21m, the biggest fraction of the total budget although we had raised 28 goats and five cows to feed the 7,000 guests who turned up. Our rings cost Shs400,000, salon Shs900,000, cake Shs3m (60 pieces). A pair of shoes Shs230,000 for each of us, the suit cost Shs500,000 while decoration cost Shs4million.
We had saved only a quarter of that budget but friends and relatives came in to help us fill the gaps until we succeeded.

Choice of venue
John: We exchanged vows at Immaculate Heart of Mary Church, Padibe Catholic Parish in Lamwo District on Friday, January 24, 2020 and Archbishop John Baptist Odama was the main celebrant.
In the village, we were able to profit from several offers such as venue, reception, even part of the food that we would not have got from Gulu Town.
Consy: Much as we initially got criticism over the venue, we tried to avoid town settings because everything in town is monetised but we needed to manage costs as much as possible. Besides, exchanging vows was more important than simply showing off to the people.

Best moment
Consy: The procession into the church and that moment when my parents handed me over to John. I got emotional and cried.
John: When she put the ring on my finger, my brain froze for a bit.

Did all you planned go well?
John: All was okay except the Bwola dancers who did not turn up for the ceremony yet that was important to me since I am a member of the royal family.
Also, my smartphone was kept away from me during the one-week retreat that I missed my family and friends a lot during this period including administrative updates.
Consy: Inadequate preparation and training. The bridal team was disorganised.

And the honeymoon…
Consy: We suspended it considering the timing of our wedding. We wed Friday January 24, but, our daughter in Senior Six and our son in Gulu University