Andrew Mugabe and Gladys Sanyu were classmates at Kabale University. Andrew was the Economics class coordinator and always used the opportunity to reach out to his secret crush, Gladys. The two later became friends and are now husband and wife. The couple shared their story with us.

In 2013, Andrew Mugabe reported for a Bachelor of Arts in Economics at Kabale University and the same year, Gladys Sanyu also reported for the same course.
“We started by socialising through class work discussions and presentations and two years later, I realised that Sanyu (Gladys) was well-behaved and down to earth,” Andrew says.

Andrew says he interacted with her often because he was their class coordinator.
“She was God-fearing just like myself, but I did not open up to her. I had to wait and we devoted most of our time to reading books until we completed the course,” he says.
Gladys says Andrew was hard working and it was a blessing to have him as a classmate and this cemented their relationship.
“I got time to know how self-motivated he was because whenever we would get course work, we were assured of Andrew’s 100 percent input and indeed he would come with everything ready,” she recalls.

The two kept in touch as classmates even after university. 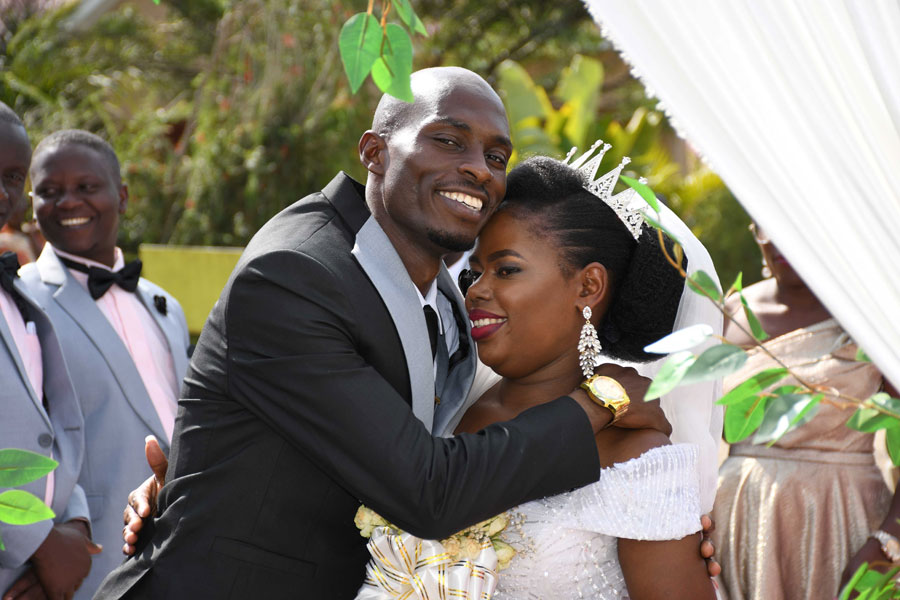 In 2018 Andrew professed his love for Gladys.
“One day, I invited her for lunch and I told her,” you are the person I have been looking for all my life. She did not respond but told me to give her time to go and think about it,” he says.
Andrew says she knew Gladys would not decline his proposal because they had known each other as classmates, saying he kept engaging her through phone calls.

“I loved her behavior and character. I always prayed for a polite and humble wife and she fitted the profile. To date, I say my wife is a gift from God,” he says.
He adds, “We engaged through phone calls until she was transferred from Rukungiri to Ntungamo in early 2019. Her transfer was a turning point because we grew close.”

Gladys says there is a time when Dfcu bank did not renew Andrew’s contract and she had been transferred to his home district. Their bond grew stronger until October 2019 when they decided to stay together.
Gladys says she accepted Andrew’s proposal because he is God-fearing with great character.
She says her dream husband had always been a tall man, which Andrew fitted.

“When he proposed to me, it was like God had answered my prayer. I always prayed to marry someone from my faith, (Anglican),” Gladys recounts.
“Andrew is kind and his friends used to say if you needed any help, “reach out to Andrew even if he does not know you, he can advise and things get to normal,” she says.
The couple’s introduction and giveaway took place on October 12, 2019, in Bwanga, Nyarushanje in Rukungiri District. It cost them Shs12m.

Planning
Their wedding was earlier planned to take place in 2020 after Glady’s giveaway party but, it was later disrupted by the Covid-19 lockdown.
“When Covid-19 lockdown disrupted our plan, we kept praying for it as well as saving some money. Last December, we set the date for our wedding for July 2,” he says.
They held only three physical meetings but relied on a WhatsApp group to coordinate activities.
He adds, “I am a God-fearing person and so is my wife. So, we could not keep in an unofficial marriage, that is why we had to make it right before Him.”
Their wedding budget was Shs35m, which their friends and family helped raise.
Andrew says their primary source of finances for the party was from their employers (Stanbic Bank for Andrew and Ugafode Microfinance Ltd for Sanyu) through their respective salaries.

Happy moments
The couple says they were overjoyed when they arrived at their reception at Home to Home Tourist Hotel in Ntungamo and they found their invited guests waiting for them was a great feeling.
“The turn-up was good with people ranging from bankers, lecturers, businessmen, engineers, friends, and relatives. It was amazing to be able to express our gratitude to our guests,” he says.
The couple is in a special way grateful to Prof Joy Kwesiga for sacrificing her time and money to support the function and gracing the function with her presence and their friends, who gave generously and worked tirelessly to have a colourful day.