On Good Friday, this year, Samson Kaggwa Ssekibuule told his girlfriend, Hope Kamatsiko, that Uplink Investments Limited, an IT company they run together had been invited to an ICT conference.

He insisted that it was important for her to attend the conference but she was hesitant.

But he was not about to back down. Just like he never gave up four years ago when he first set eyes on her.

She finally gave in and agreed to travel to the conference he kept anonymous.

Along the way, he stopped the car and feigned a mechanical issue.

Ofcourse this did not go down well with her since she had insisted that they use a different car.

He apologised before getting out and on the phone, pretending to call a mechanic.

“He seemed fishy though. As we waited for help, I saw a camera person and I feared that the journalists covering the Way of the Cross were going to capture us too,” she recalls. 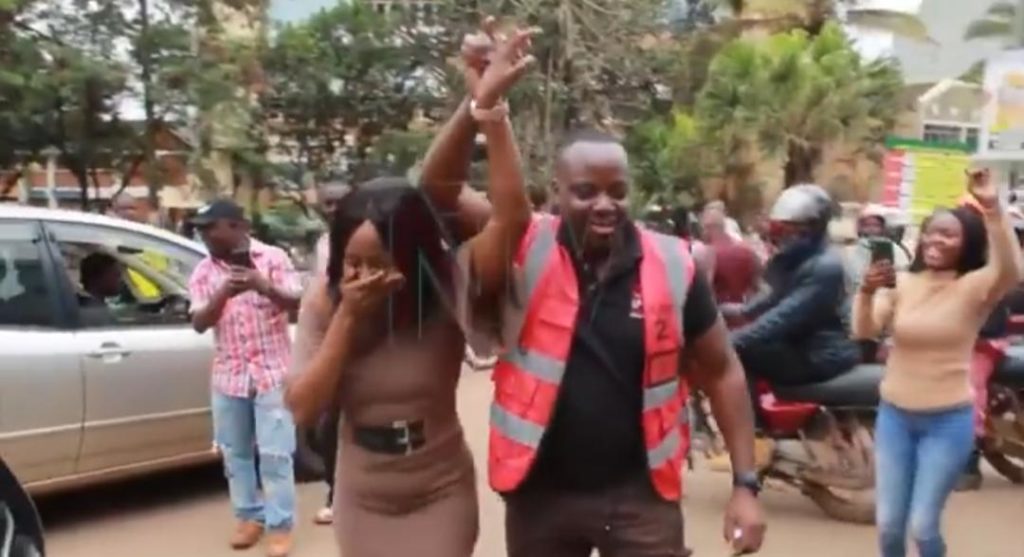 When she turned around to speak to Kaggwa, he was on one knee, with a ring in his hand. At that point, boda boda riders started surrounding them and excitedly asked her not to say ‘No’.

For a moment, she did not know what was going on. He was proposing to her in the middle of the road and she was overwhelmed by the moment.

All he needed was for her to say ‘yes’ and when she did, his heart calmed.

He was satisfied that the love of his life had accepted to start another chapter of their journey with him.

The first chapter started when their eyes first locked in 2017.

Then, each liked what they saw but like any lady worth her values and looks, Kamatsiko made sure he earned his way into her heart and life.

At the time, Kaggwa was a manager of a comedy outfit that performed at Laftaz Bar & Restaurant at Centenary Park in Kampala where she was a patron.

He saw her once, then twice and fell for her.  She was pretty, still is and whenever she smiled, he felt his world turned on.  He approached her and confessed that he liked her.

He also asked for her number.

She refused to give it to him and told him to look for it. He engaged one of her friends who volunteered the number.  When he got it, he called her the next morning and re-introduced himself.

Then she lost her phone and communication broke down. For three weeks, she was off air and he was unsettled.  He felt like a winner who had lost his trophy. Click to read more…