We wanted to plan not just for the wedding, but the marriage too

I trusted him because he also trusted me with his challenges,dreams

Clement Okello and Christine Nekesa are residents of Namakwekw Ward in Mbale City. The couple met in 2016 during a Christian youth conference at PAG Mbale City church and formed a friendship. A few months later, Nekesa and Okello left Mbale to further their education causing a cooling to the blooming friendship.

Okello joined Makerere University while Nekesa joined St. Lawrence University. Although they were unable to see each other physically, they kept in touch on phone. During the two years, they became each other’s confidant and adviser.

“Whenever I had a problem, I would find it easier to share it with Okello than anyone else. I trusted him because he also trusted me with his own challenges and dreams. He consulted me on many of his personal issues including his career and life choices,” she says.

Proposal
Along the way, Okello realised she was the woman he wanted to spend the rest of his life with. “She had all the traits I wanted in wife such as integrity, care, love, self-discipline, responsibility and Christ-centred lifestyle,” he says. The first time he proposed to her she was reluctant and instead of turning him down she asked him to give her time.

“After about five months, she finally gave me a positive response which was both exciting and relieving. We started a courtship which lasted for about one and half years,” says Okello.

In addition to daily phone communication the couple met every week. During these weekly meeting, they would pray and agree together for their wedding and marriage. “I kept on associating with a few friends of value who continued encouraging me not to give up and above all my family loved her,” he says.

Introduction plan
The couple started planning for their introduction and wedding respectively as soon as she said yes.
Nekesa and Okello started with the pre-visit where the two families meet to consent to the marriage. Their introduction was held later on January 23 without any hitches. 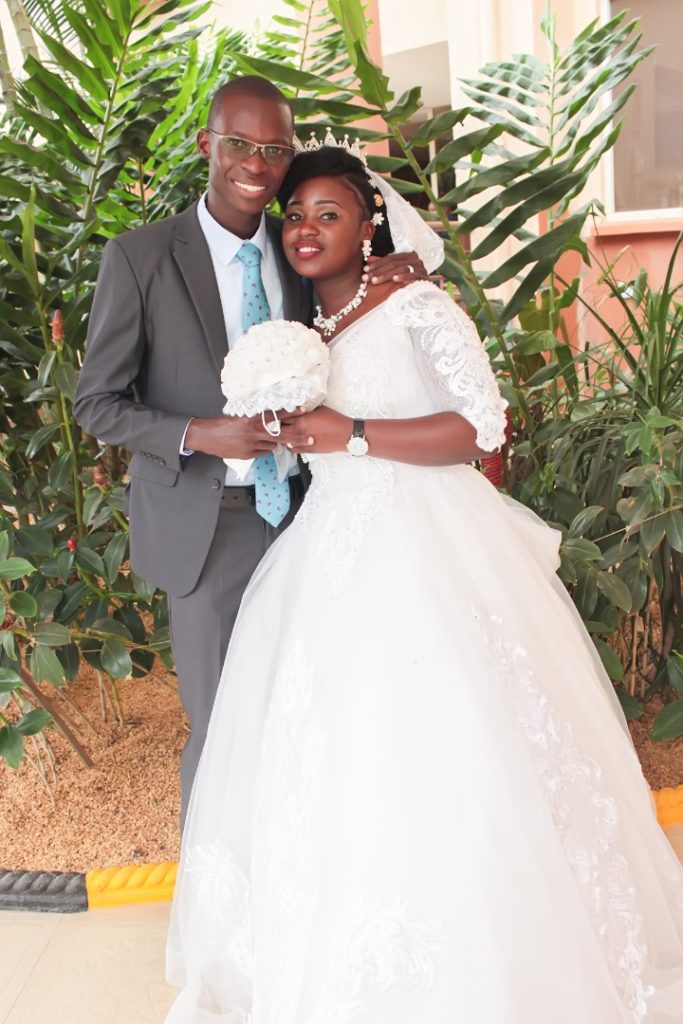 During their wedding preparations, the couple realised that they did not have enough funds for the wedding they wanted. “We wanted to prepare for the marriage as well and not just the wedding. Therefore, we decided to plan a wedding that was within our financial capacity. And because we wanted the functions done and finished we planned the wedding a month after the introduction. Our philosophy was that those who do big weddings are simply as married as those who plan for simple and small wedding celebrations,’’ says Okello.

Being Christians helped them believe that above all, Jesus Christ would provide all their needs sufficiently. “We have no doubt that our persistent prayers made the wedding possible. We prayed every day for God to make the celebration go smoothly and it did,” says the couple.

Financial support
The couple spent about Shs19m as their wedding budget and this was raised through their joint savings, church friends and relatives. “My wife and I opened up a joint account where we used to save 80 per cent of our monthly incomes and of this 20 per cent was put aside for life after the functions,” says Okello.

Their parents, relatives, friends and church equally supported them, financially and spiritually for both functions which eased all the preparations. “All sides really came up and stood with us, they contributed money, food stuffs such as matooke, rice and chicken, among others, which gave us enough money to spend on our bridal outfits and decoration,” Nekesa says.

The couple wedded on February 30 at PAG Mbale City church and the ceremony was officiated by Bishop Andrew Magombe.

Promises to each other

The couple are happy to see the journey they started all these years ago has come to a fruitful end. “I am proud to be her husband and to join my life with hers. I vow to support her, inspire and love her always,” Okello says of his wife. Nekesa too, is excited to be beginning a life with her best friend and close confidant. “He strengthens my weaknesses and brings focus to my dreams. No matter where life leads me, I know that as long as he is with me, that is where I am meant to be,” says Nekesa.

From high school best friends to husband and wife

Bride in waiting: I opted for online invitation cards for my wedding