“Watching Elizabeth Kabibi and her father walk down the aisle, her brother hand her over to the priest and then to me, I could feel the weight of the moment. We’d both be leaving our families, and I was going to take full responsibility for her. Finally, I had somebody to do life with!” Ivan Rugambwa enunciates as he recollects the special moment he first saw his now-wife, Elizabeth at St Andrews Church-Bukoto on October 2.

Ivan says he was humbled by Elizabeth’s acceptance of him as her husband, “I am far from perfect and I’m always alive to my weaknesses. For her to accept and take me with all that I am was both humbling and it was a challenge for me not to fail her but to love her.”

In this heavy moment, tears welled up in Ivan’s eyes when they almost took their vows in his parents’ absence as they had delayed to arrive. Moreover, he looked at the place where his now-late father would have occupied and wished his father was there to be witness to this vow of eternal love.

Nonetheless, over 50 people filled the seats and came to witness the couple say I do. 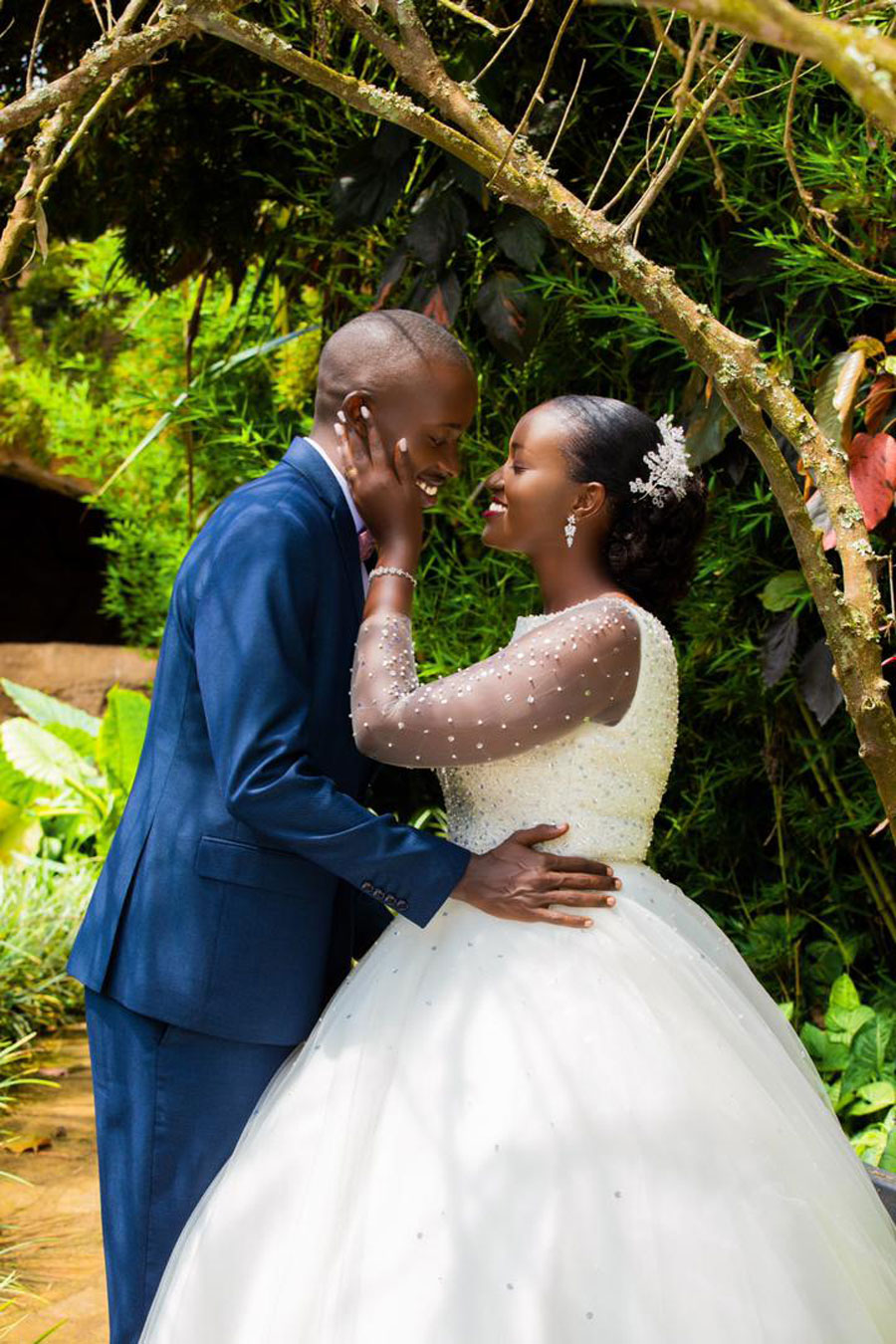 The newly-wed couple arrived at their reception at 2 pm, ahead of most of their guests. Anxiety struck the groom for the reception which was meant to start at 1 pm. Ivan accords the late arrival of guests to the fact that most were not in the church service due to covid restrictions and many came from far. Fortunately, it was only a matter of 20-30 minutes before guests started to fill his tables. The banquet was soon underway. Ivan says, “It was such a relief seeing all my friends show up. It was now homely and it showed a sort of community that was a validation of the relationships we’d been able to build over the years.”

The couple welcomed about 200 guests at Speke Resort Munyonyo and were especially riveted by the speeches. Ivan was so overwhelmed when his siblings talked about the role he played in their lives that he broke into tears.

But every beginning of a marriage has a special start and surely Ivan and Elizabeth had their own. For Ivan, it started with a name, before the face. 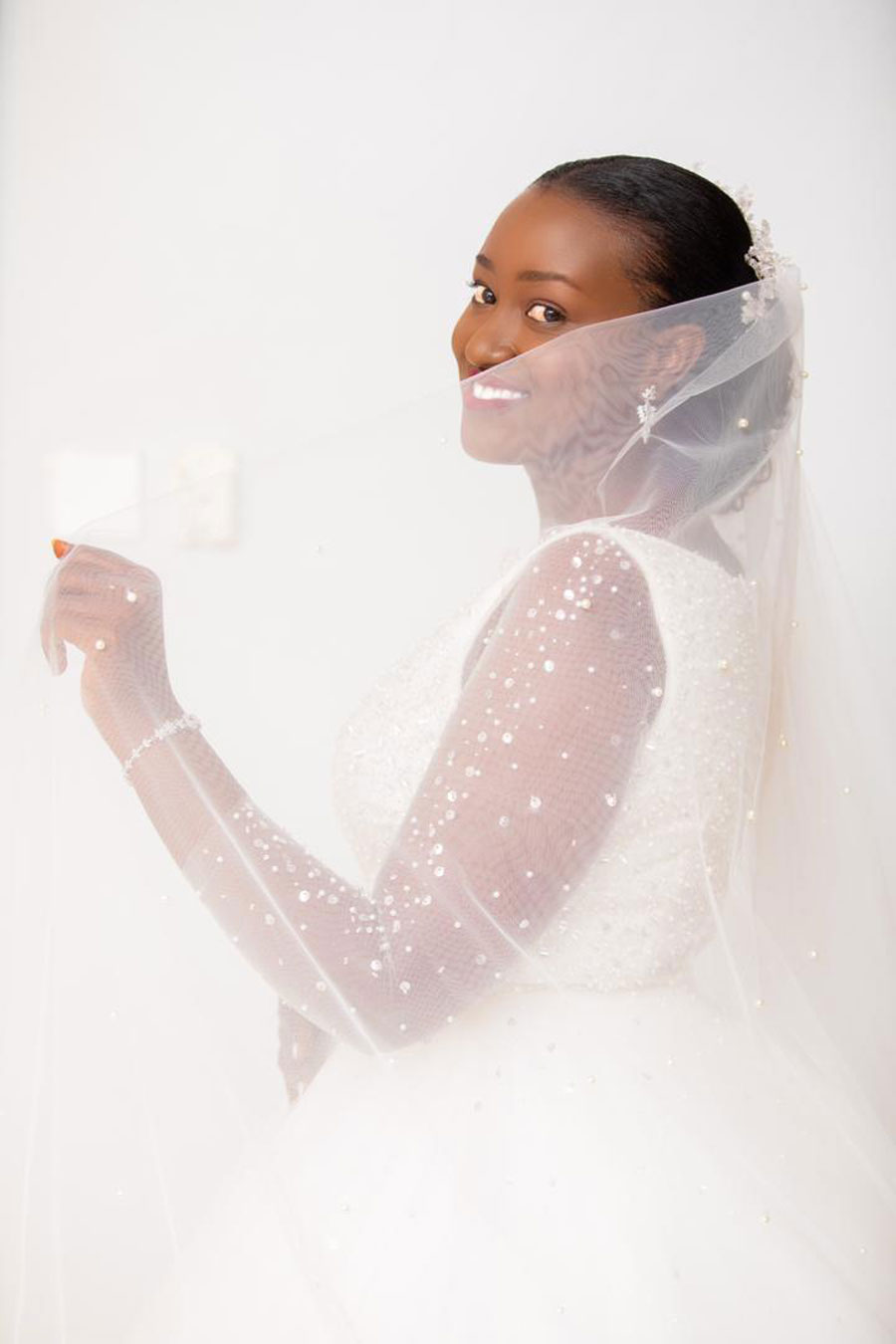 He had heard of a beautiful girl from his cousin while he was still at campus in 2014. He never got to meet the beauty until much later in 2017. On a normal workday, Ivan went to Uganda Media Centre offices to get some work done. He’d hear the name, Elizabeth Kabibi being mentioned and to yours and my surprise, it was still imprinted in his mind. “Despite the years we’d taken without meeting, the name had sunk. When I saw her, at that point, I knew this is the one.” discloses Ivan.

Knowing that she is the one is one thing, and getting her to be yours is another. Ivan had to establish a relationship. After saying hi, he checked her out on Twitter, followed her and she followed back. Like that, he would afford to access her dm, since they had not exchanged contacts. One chat led to the next and he was able to follow through with asking for her contact. 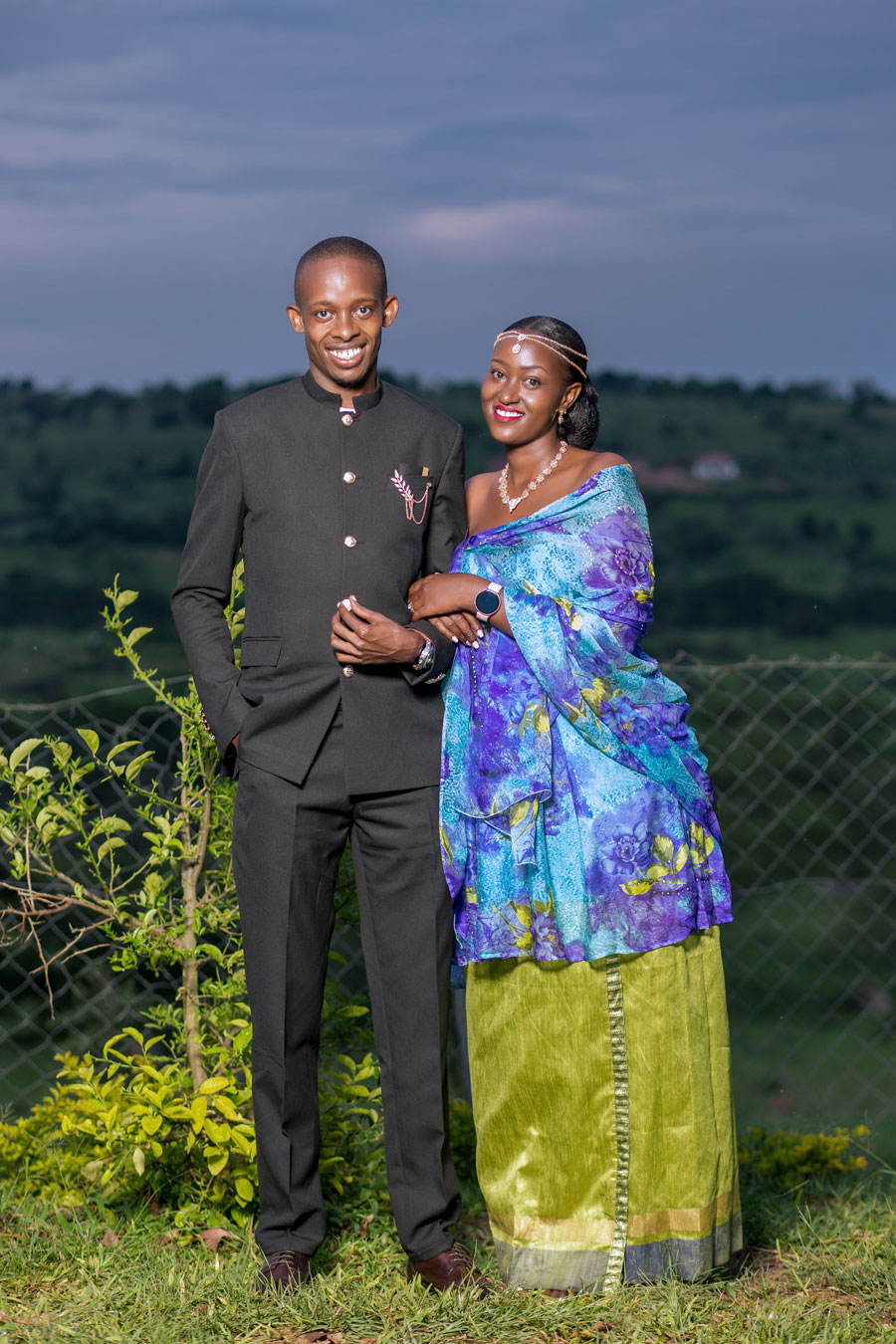 The Annual Human Rights Conference that Ivan was to moderate 3 months later was a fair roast to their marshmallow-like friendship. When the posters of the event were shared online, Elizabeth saw him and asked how she’d get involved in the event.

Ivan took the opportunity to invite Elizabeth to the conference. There, they met and talked. It opened a door to their constant future meetings. He’d even start to invite her to dates and when she kept showing up, “I grew more confident,” lit up Ivan.

In 2018, Ivan and Elizabeth found themselves working at the same place. You’d think it disrupted their relationship, but as he corrects, “Work did not in any way disrupt or impact our relationship. We’d schedule our meetings away from office.”

The couple continued to enjoy each other’s company. Elizabeth likes him for his forthrightness and authenticity. Ivan is rather fascinated by Elizabeth’s thoughtfulness as well as her emotional and social intelligence. “She’s also very fiercely independent and strong-minded so sometimes that often created some sort of tension between us, but we were both always alive to the fact that the commitment to each other was more important than any temporary emotions that inevitably happen among any two people who are closely related. We always kept our eyes on the ball.” Ivan.

Towards the tail-end of 2020, Ivan and Elizabeth’s relationship grew and they started to discuss the possibility of committing to a lifetime. They often thought of ideas, through to 2021. 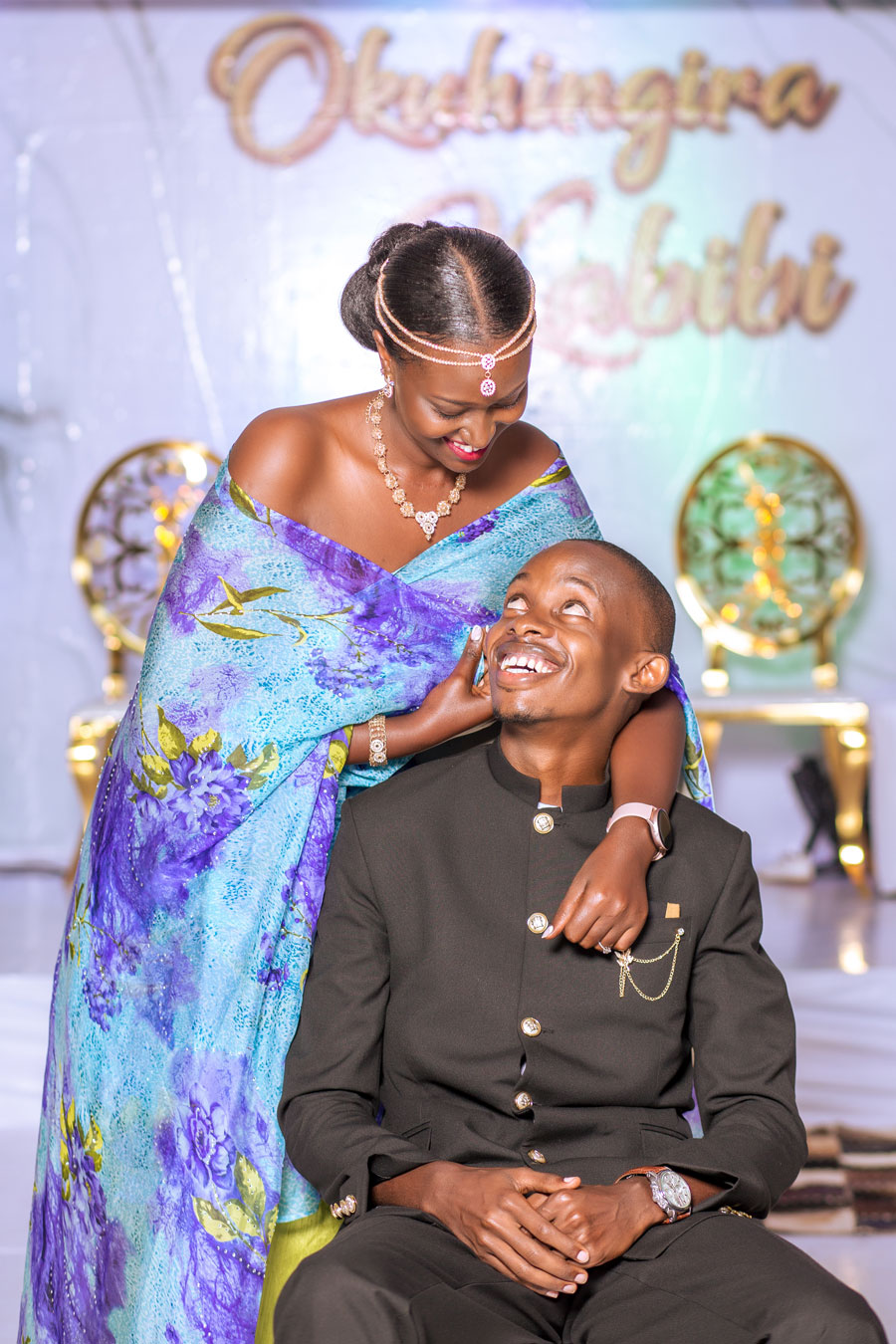 It’s no surprise that someone would take their loved one on a get-away on February 14, because it’s Valentine’s Day. But Ivan had a plan! In Sanga Town Council lies Lake Mburo National Park. There, at a new safari destination, Kigambira Safari Lodge, that’d been trending at that time, is where the plan would be executed. On suggesting destinations for their get-aways, Elizabeth had proposed this place herself and Ivan took it on for his special execution. West they drove and arrived at Kigambira in the evening.

Ivan’s secret and special plan was a fireplace proposal which he had planned to accomplish after dinner. While the couple had their dinner, he realized the weather was not friendly and was afraid the fireplace proposal idea would not work. While he corresponded with the Manager to make a change to the set-up, Elizabeth was getting irritated about his being on phone. Ivan and the Manager agreed that the set-up be taken to the balcony of the couple’s room.

Will you be mine? 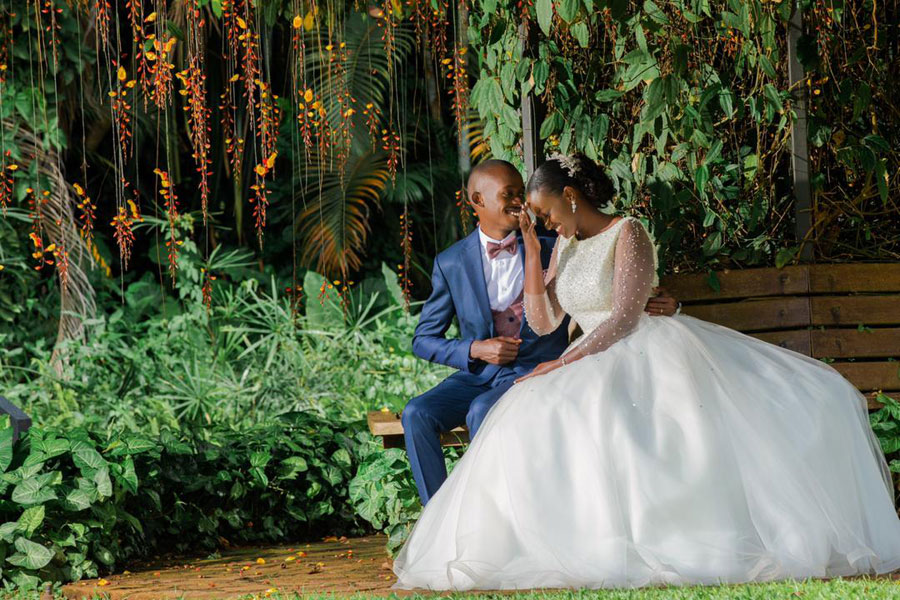 Through with dinner, they made for their room. Ivan confesses it was an astounding set-up. Elizabeth was not one to wait for bells; she went right ahead and started to record the exquisiteness of the room with her phone. Whilst she was engrossed in the recording, her lover went ahead of her to the balcony. He picked his ring from his pocket and waited quietly.

Elizabeth opened to the balcony and voila! she saw a man with his ring box open. She fidgeted for her slipping phone that was doing the recording, as he popped the question. She cried! A special night it was. There was no photographer on scene as Ivan had wanted it exclusively private. In fact, management had earlier on requested to share visual moments of their engagement but Ivan declined. The hours following, Elizabeth would try to share her happiness with her sisters by sharing videos but the network wasn’t helping.

A visit to Elizabeth’s family

A fortnight later, Ivan went to see the person he would ask to lead him to Elizabeth’s family to seek her hand in marriage. This man-made a prior announcement to Elizabeth’s family that he’d be leading a delegation of people to seek their daughter’s hand in marriage. Once the idea was endorsed and dates shared with Ivan, preparations for introduction ensued. The okugamba obugyenyi was merged with their official introduction.

In mid-March, Ivan was officially introduced to Elizabeth’s family. He was fascinated by the traditional dialogue game that usually involves teasing and making inquiries about who the groom and his team are, even though their identity is already clear. Finally, they were let into the family and to Ivan, the photo moment with his fiancé and her family was a green light for them to go ahead with the process of marriage. 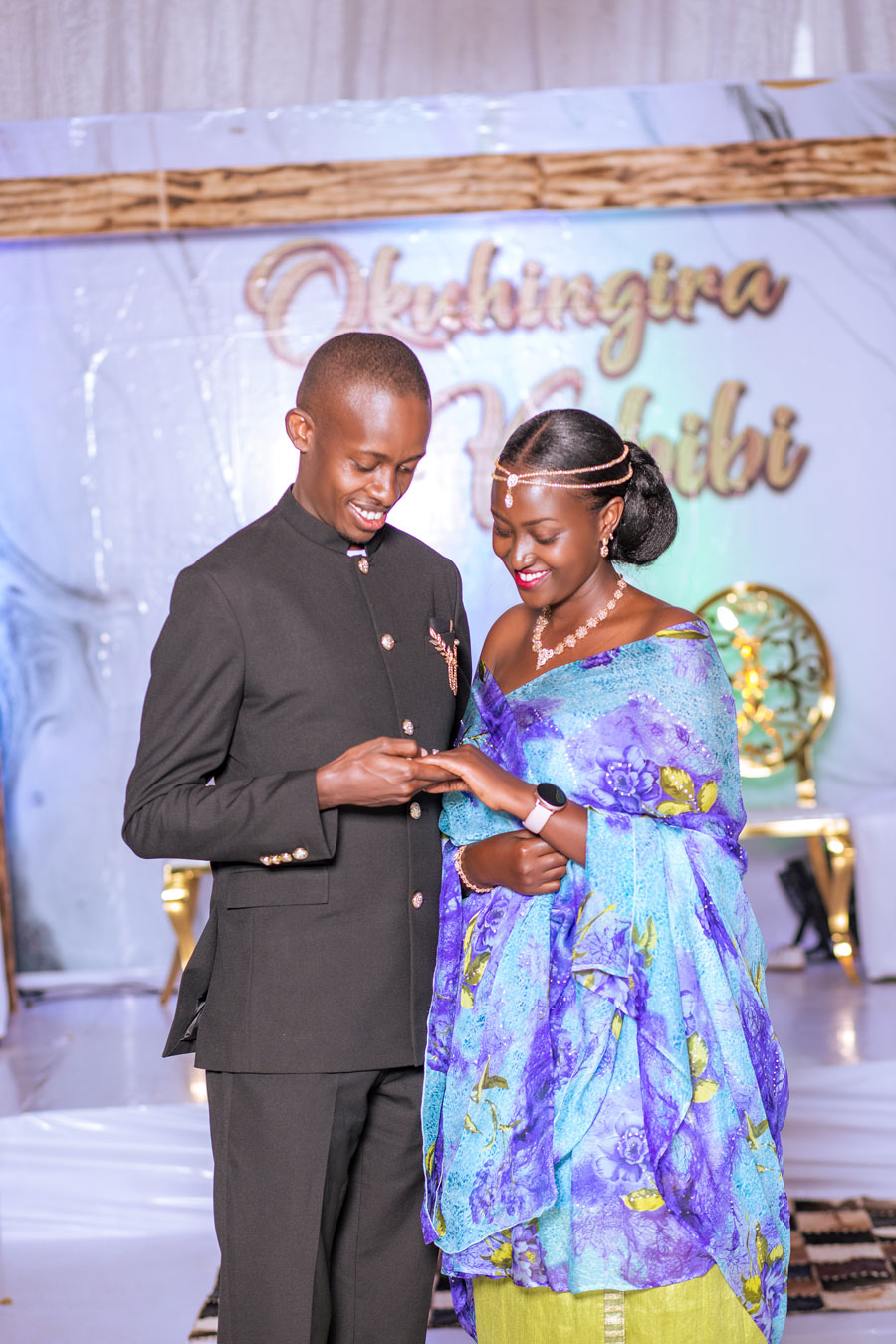 Riding towards the wedding

It was a hectic preparation as Ivan recalls. The couple and their relatives had contracted covid during the lockdown and it was a little difficult to follow up on the wedding preparations. “The circumstances were not conducive,” the couple had realized. The wedding had to be postponed from August to October as the third wave of covid-19 had crippled their plans. The economy too was not doing well. However, their friends came through with financial support and the couple was overwhelmed.

Elizabeth is welcomed to her marital home

Before the couple would take a week away for their honeymoon to relax and think about the life following, Elizabeth got welcomed to her home by Ivan’s mother and the rest of his family. With this initiation, the couple would now settle into their home and start anew. “After the strain of organizing the wedding, the aftermath was so homely and intimate in a different sort of way. We only had ourselves, we were new lovebirds, still excited about each other. It was beautiful that we were now planning life together. We often teased each other about the rings on our fingers and how we’d entered into a new community of the marrieds.” conclude the Rugambwas.