The honeymoon is by far the most thrilling part about a wedding. Without interference from friends and family, newlyweds get to enjoy quality time together, and make memories that last a lifetime. However, for 27 year old Amy Thomson from Lymington, Hampshire; this was not the case.

In an incident similar to what would be straight out of the horror movie “Honeymoon From Hell”, Amy was left in excruciating pain. It all happened while on a two-week honeymoon in picturesque Mauritius in September. She was stung by one of the most venomous fish in the world; while snorkeling with her husband Callum Thomson, 37. Amy told The Daily Mirror that she was told there was no need to wear sea shoes because there was nothing harmful in the seas below.

“Through our holiday rep, we picked a speedboat trip where they take you to all the differing snorkel stops. We were towards the end of it and there was a BBQ on the beach. We were all on the beach and I was between courses and I was quite hot so I wanted to go in for a swim.” She narrates. 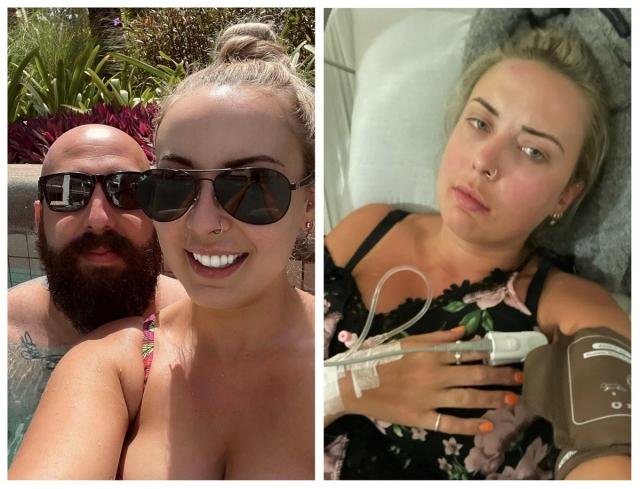 “I literally went to put my sea shoes on and the guy who was organising the trip said ‘no no no you don’t need those here.’ It was all sand so I listened to him and went in. When I got stung, I realized right away that something had happened, but I thought it was coral, so I came straight back to the shore. When I was at the shore that is when it hit me. I honestly have never had that much pain in my life.” The hairdresser adds.

“I looked at my foot and it had already doubled in size, it was all swollen, I looked underneath and it had gone all blue and white. I sat down at the dinner table and I was like ‘no this isn’t right’.”

She was rushed to the hospital in an ambulance; and spent the night receiving treatment, which cost her £1800.

“I received anti-venom for the sting. I had fluids, morphine and later that night I had an incision down my foot where they squeezed the venom out.”

Amy then speaks about the heartbreaking part of getting her honeymoon totally spoiled.

“The rest of the honeymoon I was bandaged up and could not do anything. I was just chilling by the pool. What should have been an amazing honeymoon was spoilt from that point.”

While heading back home, something worrying happened,

Desperate for a cure, the 27 year old adds.

“When I was putting my shoes on, all that guy had to do was not say anything and let me crack on and put them on.”

We cannot spend more than five hours without speaking’

We cannot spend more than five hours without speaking’