Harry and Meghan shake up royal tradition in star-studded wedding

Britain’s Prince Harry and US TV star Meghan Markle tied the knot on Saturday in a globally-watched ceremony at Windsor Castle filled with traditional pomp and modern twists. 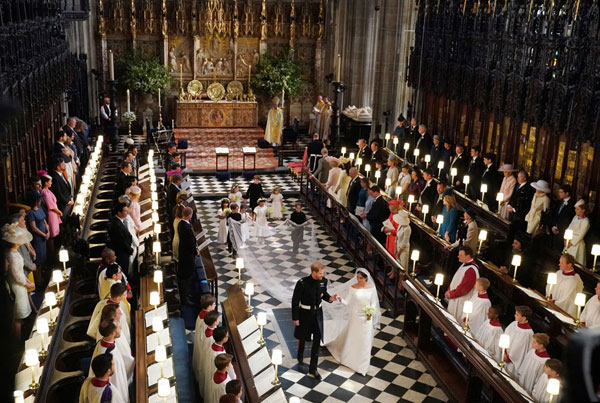 Some 100,000 people were expected in picturesque Windsor, west of London, for the historic moment and street parties were being readied around the kingdom.

Thousands of fans, many decked out in royalist paraphernalia, camped in the town overnight or arrived on the first trains from London, pulling into a station renamed “Harry and Meghan Central” for the day.

The service at noon (1100 GMT) inside Windsor Castle married the old and the new – a traditional Church of England wedding but with unusual turns including a gospel choir singing “Stand By Me” and a lively US pastor delivering the address.

Ahead of the nuptials, Queen Elizabeth granted Harry and Meghan the titles of Duke and Duchess of Sussex.

It is the last big royal wedding of 92-year-old Queen Elizabeth’s reign and the last on this scale for a generation until Prince William’s children, Harry’s niece and nephews, tie the knot.

Markle, 36, started her walk down the St. George’s Chapel aisle on her own, interpreted by some commentators as a sign of her feminist credentials.

Besides starring in the US legal drama “Suits”, she was also a United Nations advocate for women’s empowerment.

Her father Thomas Markle, recovering from a heart operation in Mexico, pulled out on Thursday – though he still appeared in the printed order of service.

The reclusive Emmy Award-winning former television lighting director was caught in a fiasco, posing for staged photographs after complaining of media harassment, then performing several U-turns over whether he would attend.

In her father’s absence, Markle has asked Harry and his best man William’s “Papa” Prince Charles, the heir to the throne, to bring her to the altar.

Before they retired for the night in separate hotels, Harry, 33, told well-wishers he was feeling “great”, while Markle said she felt “wonderful”.

The couple met on a blind date in July 2016 and quickly had a whirlwind romance, criss-crossing the Atlantic as she continued filming “Suits” in Toronto.

The Archbishop of Canterbury Justin Welby, who will marry the couple, said they were “very sensible” and “self-possessed”.

“There’s profound affection between them which is wonderful and a deep understanding and mutual support,” he said.

The groom, officially Prince Henry of Wales, is expected to be given a new title to mark his wedding day.

Following the service, the bride and groom rode through Windsor in an open-top carriage.

Royal fans camped out for several nights for a front-row view.

Singing and laughing, Audrey Wilde, 66, from Newcastle in northeast England, wore a black t-shirt with the British flag featuring the couple on it.

“We want to be the nearest we can so we needed to get up early!” she told AFP. “The atmosphere will be electrifying!”

Karen Wallace, 53, from Chicago, said she wanted to give the bride some backing after the so-called Markle debacle over her father.

“After the week she’s had, she needs some support,” she said.

“I think her half siblings are so jealous — they want their 15 minutes of fame.”

“I think they’re a little bit envious of us, not just the Americans but the Europeans too,” she said of the international attention.

Markle, a biracial divorcee from Los Angeles, is seen as a breath of fresh air for a royal family often seen as overly traditional.

“I think it’s really nice that he’s marrying someone that’s representative of modern society,” said Sam Lukes, 28, who came from nearby Reading to see the procession.

But feuding in Markle’s fractious family overshadowed the wedding build-up.

Her estranged older half-siblings, who have not been invited, have been regularly popping up and venting forth on multiple media outlets.

Meanwhile her even more distant half-brother’s ex-wife and son Tyler, a cannabis farmer, have jetted into Britain to make merry beyond the castle walls.

When Harry and Markle met, she was a divorcee of three years; he had a few foundered relationships and his 10-year army career recently behind him.

Harry was scarred by his mother Diana’s death in a Paris car crash in 1997 when he was just 12, and he had to mourn in the full glare of the world’s media and got close to breakdown in his rebellious youth.

She married producer Trevor Engelson in 2011 but the relationship collapsed in 2013 after she moved to Toronto.

Security was tight in Windsor ahead of the event, with armed police officers and snipers posted around the town.

The event is a welcome respite for a country still burdened by austerity and deeply divided over Brexit, although polls have shown that only around a third of the population is interested in the wedding.

Even sceptical Britons can at least rest assured of a financial boon from the nuptials, with Brand Finance estimating a benefit to the economy of around £1.0 billion (1.1 billion euros, $1.3 billion).

Wedding cakes that make a mark

Wedding cakes that make a mark

More photos from the wedding of Rwanda’s first daughter released