When marrying an Acholi woman, in-laws crawl their way into her home

Traditional weddings are often quite a lot of work. That is to say, frustrating, for the couple involved. The side of the groom has its special nerves but let us not deny that the idea of having our “sweet-hearts” officially handed over to us for life, makes the entire strenuous bride-price paying process worth it.

Uganda is a country of beautiful diverse cultures and in each, their own kind of introduction ceremonies.

Claire Laker, who is from the family of the Paramount Chief in Acholiland, shared with us her journey to finally introducing the man of her life, Simon Peter Okii. 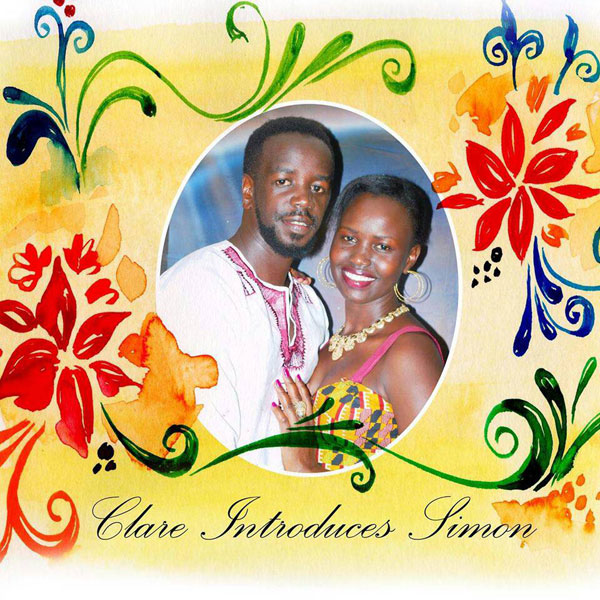 Claire met Simon one idle evening when she went to watch basketball at one of the courts in Kitgum.

She admired how he played and lucky for her, he had noticed her presence as well.  Simon came to interact with her after the game and the two took a stroll home.

They innocently exchanged contacts but unknown to them, their destiny was to be together for life. The two occasionally communicated and got to know each other better.

“I remember this one time he set a date for us at one of the hotels upcountry and yet on the same day I had to travel to Gulu for school. I had to make a choice and I ended up choosing Simon over school,” she shyly narrates.

A year later, the two would have to do a traditional ceremony where Claire would officially introduce Simon to her parents. Only for them, Simon would have to pay a fine for having taken Claire and having a child with her, Baby Alexis, before an official marriage was done.

The process of having a marriage in Acholi

The initial stage of every relationship is meeting and wooing to mean ‘win over somebody’.

When an Acholi man meets the girl that impresses him and intends to marry her, the first step of showing responsibility is to casually visit her mother’s home accompanied by a friend. Later when the visitors leave, the girl informs her mother of who they are.  An investigation to ascertain the intending couple is not related by blood or clan is made.

Eventually, the man tells his side of the family about his heart’s interests and when it is agreed upon, they set off for introduction and settlement of bride price.

In the past, it was wise for a girl to look for somebody who could afford enough cattle but with the many changes within the 21st century- ranging from poor economy and materialism, the requirements can vary from live-stock to assets such as vehicles and so on according to the wishes of the bride’s family.

However, if the girl gets pregnant before the introduction ceremony, tradition seeks that she delivers from the home of the intending father as proof that he acknowledges ownership of the pregnancy. Eventually the girl is left to go home with her child after birth.  If her man still wants her, he will have to follow her and pay a fine for both she and the child to return with him home. This was the case for Claire and Simon.

This ceremony known as lubu koo anyaka loosely translated as “following after the girl.”

After this is, the preparations for the introduction ceremony begins.

The man’s family comes to the woman’s home for the introduction ceremony. This involves introduction of tribe, clan and family background to establish whether the two are related or not.

This part is usually casual. The dates for dowry settlement are then established and the woman’s father writes a list of what is required as bride price. It ranges from cash and tangible goodies (edible or not) to livestock and so on.

Eventually, through a coordinator, negotiations are made and a date for the traditional ceremony is set.

This happens only in the evening at the home of the mother-of-the-bride-to-be. It is disrespectful to visit the mother-in-law during day time. The rest of the people who were not invited during the visit to the mother-in-law’s house can come to celebrate after everything has been settled so that all fill involved.

When asked why, John Ojera commonly known as Ozeric Live for his traditional radio show on Mighty Fire 91.5FM, says this ceremony is done in the evening because it is assumed that during day time there are many people who might not wish the family well and will try to do evil things like witchcraft if they witness the proceedings.

Before they come, spies, usually aunts from both sides are placed in different parts of the home to see who comes before it is evening. This is more of a game. The first person to see the arrival of the groom and his company ululates and is awarded a gift usually in form of money.

A ribbon is placed at the home’s entrance, usually the gate so that before the groom’s family enters, he pays an agreed entrance fee before it is cut to give him passage.

Immediately after entering the compound, they are required to get on their hands and knees as a sign of respect and crawl to the mother’s door.

Yet again when they reach, there is another entrance fee required before they are welcomed inside the house.

Some of the essential requirements expected from the groom’s side include:

The girl is also required to recognise the groom and his family and consent they are the ones but before she freely speaks, the groom’s family has to pay a certain fee.

The bride will then spread animal skin on the ground for this is where the dowry cash is placed. Her father will then check the list to confirm that everything is settled accordingly and the groom will be accepted into the family. If even one is not, the function will not proceed.

If all is settled, there will be  ululation from one of the aunts to confirm that the marriage is going to be official.

There is also a lot of  dancing and ululation with all sorts of drinks served throughout the night. Old women rub big saucepans on the ground to sounds of the traditional dance, lakubu-kubu.

For every celebration, the Acholi cultural wear is the gomesi for ladies and a kanzu for men. Suits can however be permitted.

The mother-in-law cooks for the groom’s family and the marriage celebration takes place for 2-3 days. This includes introduction of all the family members of both sides, congratulations and conclusions.

When all is done, the bride remains at home for some days as she is prepared by her mother, sisters and aunts for marriage. As she leaves, her mother packs for her kitchen-ware that she will use to cook at her husband’s home.

The bride goes with her sisters to her new home. There is further rejoicing and merriment at the groom’s home in welcoming the new bride.  In a ceremony known as kiyalo to mean appreciation, the bride’s sisters help her make a meal for her in-laws so that they taste her food.

Eventually the bride’s sisters and in-laws leave in order for the new bride to take up her wifely roles in her new home.

Claire and Simon who went through this process are now traditionally recognised as husband and wife.

The pregnant bride: How to rock wedding your day