Brian Ogwal, a carpenter says that he has failed to take a step towards financing his Introduction because all the kwanjula ceremonies he has ever attended were such expensive affairs.

“With my limited resources, am afraid to go through a kwanjula because I will end up being a laughing stock. I am cohabiting with the mother of my three children but we shall do the traditional and church wedding when we have enough money to splash so that we shall be respected,” he comments.

Today, the extravagance during introduction ceremonies is common with the groom turning up with truckloads of food stuffs, many animals like chicken and cattle, not to mention a land title, furniture, water tanks, cars and other gifts. However this is actually far from what the Buganda tradition requires of a kwanjula ceremony.

In October 29, 2013, The Observer Newspaper reported a story where the Nnaabagereka of Buganda, Lady Sylvia Nagginda was quoted saying that she is to start a mission of putting the kwanjula back onto its foundation of fewer gifts, ending in good time, privacy of the function and less people attending.

She wanted people to do away with these pompous introduction functions that sway away from the Ganda culture and most importantly scare youths away from doing the honorable thing – marriage.

Twaha Mukisa, an events manager and master of ceremonies (emcee) for introductions, weddings and anniversaries, explains the important requirements that can earn a groom the acceptance from the bride’s family to take her home in a case of limited resources;

Twaha explains that the mutwalo is a key bride price requirement requested by the bride’s father before accepting the groom to get his daughter’s hand in marriage on the day of the kwanjula/introduction.

He adds that it is the name given to anything a bride’s father mentions that a man should bring as bride price. It can be material items like art pieces or portraits of one’s clan, sofa sets, fridge, water tanks or any other items.

As long as that is fulfilled, culturally, a man is allowed to take his bride. If a man brings a lot of gifts but skips the particular item, his father-in-law to be wanted as bride price, the family of the bride holds the right to deny him their daughter’s hand in marriage.

The mutwalo is characteristic name among the Baganda and Basoga. Among other tribes in Uganda, it has different names to mean the same.

He adds that a man cannot claim a woman as his bride before her family, without payment of the mutwalo.

He explains that the groom is required to buy two certificates for Buganda kingdom from a company called Majestic Brands located in Bulange, Mengo. One for the groom and the other to be presented to bride’s father on the kwanjula day.

They are locally called ettoffaali certificates which are taken as a special contribution to the development of the Kingdom and the groom is thanked on that day for that effort.

Then, the presentation of two portraits of the Kabaka and Nnaabagereka of Buganda and also a map of the kingdom.

In the current reign of Charles Peter Mayiga, the Katikkiro (Prime Minister) in the government of Buganda, a hoe and two seedlings like young mango trees were also introduced to be planted in the compound of the bride’s parents.

Twaha explains that the groom’s family has to carry 3 calabashes of local brew. The first called, ekiggula luggi (door opener), which is for knocking the door so that the groom’s entourage is welcomed to the venue.  The second one called ekita eky’enjogeza (opens up the discussion) that soothes the throats of the future in-laws for the negotiations.

This is because an introduction function is a social event that is shared over drinks which motivates the discussion to take place.

The last one is ekita ekiwasa omukazi. (The one that releases the bride to be married) This bride’s calabash also accompanies omutwalo, which is key for the bride’s family to accept the groom to take her home as a wife.

If the bride leaves the marriage after, the groom can come and ask to take her back home with a representation of that calabash.

For the case of Muslims and Christians who do not take alcohol, they either take sodas or omubisi (banana juice), fresh before it is fermented. They can either get the drink and pour it in the calabash or take a crate or a carton for the case of sodas.

“This is where religion has had influence over culture,” Twaha notices.

Clothes for the parents

“The clothes for the parents called embugo are given to the bride’s father, mother, paternal and maternal uncles and aunties, the muko (her brother), and grandparent .The kanzus and gomesi are cultural dress codes for the males and females respectively,” he demonstrates.

A Bouquet of flowers for the bride

“When the bride is finally identified among the women assembled, the groom’s sister has to have a nicely decorated bouquet of flowers to give to her as she delivers the message of the groom and his family on how privileged they are to have her in their family,” he explains.

The groom also should carry a suitcase that contains essential items for the bride like clothes, shoes, earrings, make-up, perfumes and among other gifts.

“This same suitcase is used to pack all her personal belongings that will be taken to her husband’s place,” Twaha enlightens.

Official envelopes to be given

He also explains the need for the groom to prepare money which is placed in different envelopes for the bride’s father, mother, brother and the Ssenga.

“For the case of the girls and boys, young women and men who come to welcome the visitors, it is okay not to give them anything if you do not have. Giving them presents or money a trend that started in this era,” he notes.

Twaha adds on that since the Ssenga is the most important person next to the bride, most times she gets two envelopes, first one called eya galubindi, the money for buying the glasses which she will wear in order to easily screen through the guests and choose who the groom is.

And, then when the groom and a few close family members are taken inside to be served a special meal called luwombo, which is a stew of chicken with peanut sauce wrapped and steamed in banana leaves for a few hours without getting it to touch the water or oil. In Buganda, it is polite for the in-laws to thank her for the food with at least an envelope because she personally prepared it.

Important birds and animals to be brought

The cock for the bride’s brother called enkoko y’omuko has to be given to him so that he agrees to the sister’s marriage.

Once on a wedding show aired on Top Television, the brother to the bride first demanded that the groom gives him the cock that he promised before accepting them to be joined in holy matrimony. The best man gave him the money immediately so that he buys it.

“Also, if the groom has lived with the bride and even had children before the introduction, he will be required to bring embuzi ey’amawemukirano, a she-goat that is used to wash away the curse from the family. It is usually passed from the backyard of the homestead,” he demonstrates.

“Another she-goat is also given after the function if the girl is found a virgin, that’s where the term embuzi for virginity originated from,” he adds on. 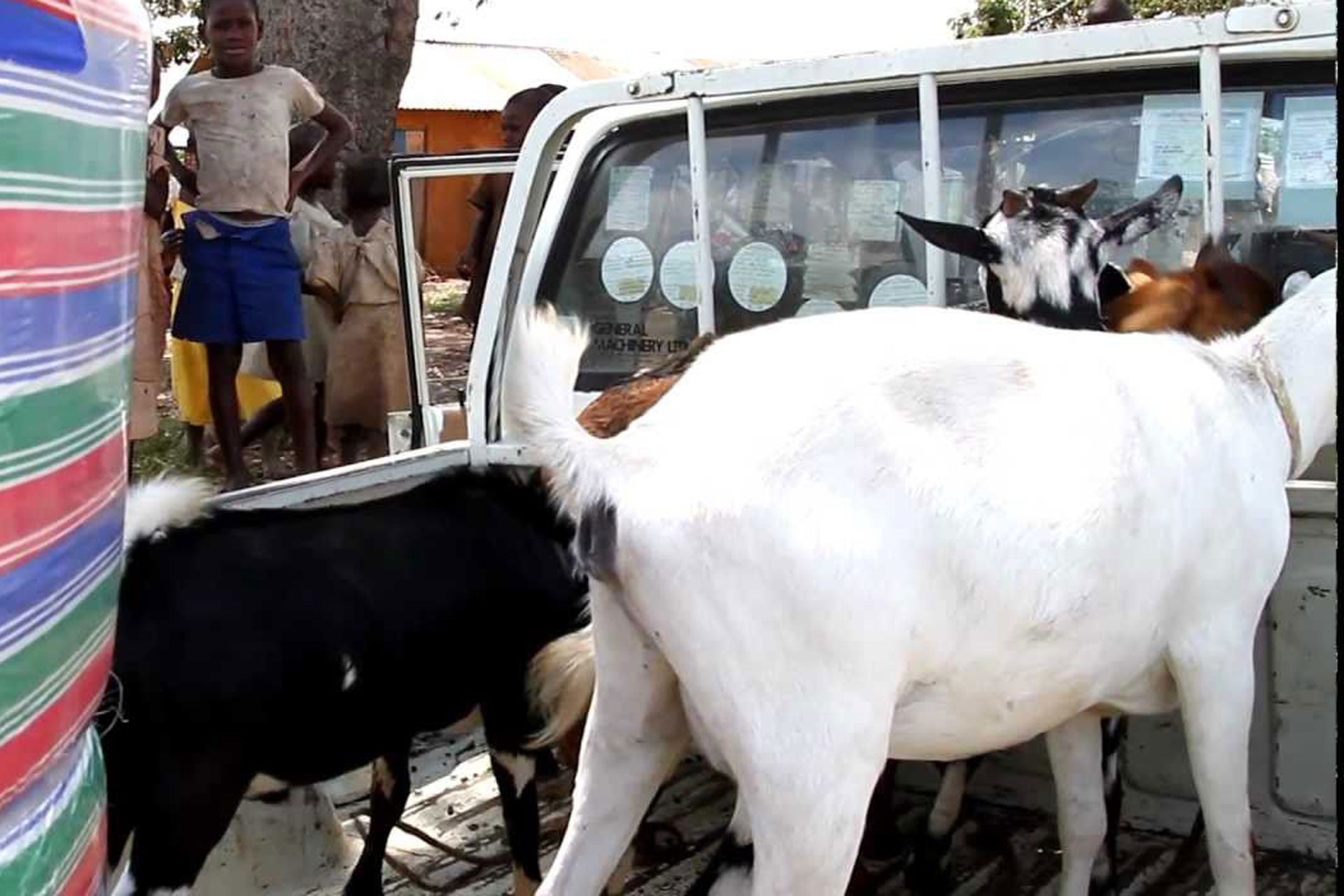 Twaha further explains that items like fruits and vegetables are just additions that can be carried in case the groom has more money to spare. But he ascertains that bringing foodstuffs was something started by the abogezi (Master of Ceremonies), or even in times when there was drought in certain places.

“But I do not advise the groom to spend so much on these because for instance, if the introduction is taking place in a place like Butambala where people have their own gardens that produces tomatoes, onions, green pepper and so many others, presenting them with those won’t make a difference.

He recommends them to rather bring items like loaves of bread, blue band, sugar, salt, soap, paraffin, which are long lasting than the perishable foods, although these are still additional items that will not affect whether you get the bride or not.

The presentation of the above 8 items will definitely traditionally guarantee you a wife and you shall gain the respect of the family of the bride.  More items to make an extravagant ceremony so that your financial muscle is demonstrated is simply a question of personal desires.