The couple at their wedding

After 20 years of cohabiting with little hopes of ever getting wedded, Francis Kafeero 65, a farmer from Gomba has lived to achieve his long desired dream of walking down the aisle.

“I met my wife back in the 1990s. We did not carry out any customary ceremony, but with negotiations from our parents we moved in together and started a family,” Kafeero recalls.

Starting their marriage journey, from the very beginning of their relationship, Kafeero and Nabakooza desired to have church wedding. It haunted them to live together unmarried, however, they were limited by finances.

Trying to fulfill their heart’s desire, last year Kafeero was able to save shs50, 000 to help him prepare for the wedding after an announcement of a mass wedding was made at his church parish in October.  The couple was excited about sharing a wedding with 43 other people because this was a great chance for them to save on costs and still have a gorgeous wedding.

“I wanted us to be part of the mass wedding and get to the Lord’s Table,” Nabakooza reveals.

However, the couple found themselves reacting differently. Nabakooza was excited about the fact that at her age, she was about to walk down the aisle clad in a gown she never thought her husband would afford.(The church catered for the bride’s gowns) Kafeero says he was anxious, unaware of what to expect.

With a contribution of shs20, 000 for church announcements, the two filled in an application form and attended marriage lessons every Tuesday at their parish.

Normally during wedding planning, people are in constant contact with friends and family for financial support, if not anything. This wasn’t the case for Kafeero and Nabakooza as most of their wedding was church funded. For witnesses, they went with a few church parishioners to the ceremony.

The church provided the event with a lot of food and drinks plus a bonus cake for each couple that took part.  After the celebration at 6pm, Kafeero and his wife, still dressed in their wedding attire bid me farewell as they carried their cake and boarded a taxi to Gomba, this time as a married couple.

This couple was among 44 who’s dream of a matrimonial ceremony came true at Munyonyo Martyrs Shrine on December 30 in a mass wedding organized by the Archbishop of Kampala, Dr. Cyprian Kizito Lwanga.  Couples were seen lovingly pampering each other and whispering sweet nothings to themselves as though their relationships were just budding. 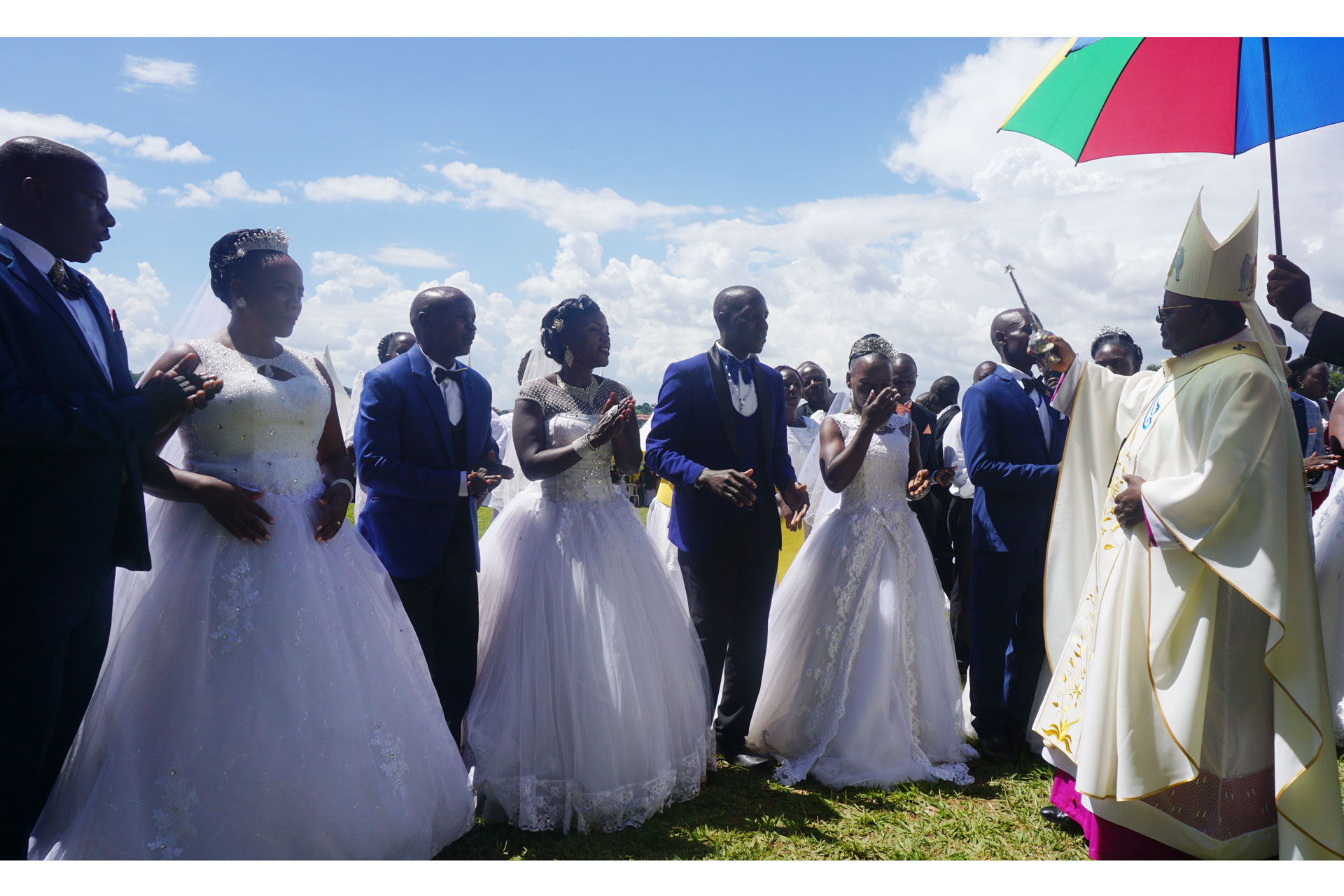 From the elegant floral arrangements on the tables to the timeless white gowns won by the brides, the colorful ceremony was commenced with mass before the couples proceeded with a reception.

What other couples reminiscence about the event

Martin Bahamuha 60, and Betty Nassaza from Kibuye  parish were also part of the wedding. Bahamuha says they have been together for 18 years.

“This wedding has relieved us of a big budget that we did not think we would raise.” He adds that nowadays weddings are too expensive to hold as some people are forced to get loans from the bank yet the whole idea is to get God’s blessings. He says mass weddings open doors for people from all walks of life. It is also one way of promoting the marriage institution and teaching couples that it’s not about the glamour, luxuries, cake or décor. The whole essence of a wedding points to purity and commitment before God.

Aksanti Namegabe Swazi 30 and Jolie Bahizire 25 from Mutundwe parish were the youngest couple at the function. The two met a year ago and thought this was a chance for them to receive the sacrament of holy matrimony.

“Having a single wedding is everyone’s dream but at times you are limited by the many demands that call for lots of money inclusive of the church fee, reception, wedding gown among other things,” Bahizire says, adding, “such demands scare people away thus cohabiting, something the church is against.”

Edward Mutagobya and Solome Nalukwata have been together for 20 years.  “Holding a mass wedding is not something many will consent to but it is a good idea because church partially relieves one of expenses and one may only cater for the reception that is if they are in position to,” the couple narrates.  They also add that the people should stop thinking that such weddings are only for low income earners because having a wedding is everyone’s dream and when an opportunity strikes,  then people should participate and not over spend.  Furthermore they noted that for the event to be a success, their church leaders needed pictures of them combined with their biographies.

Being a 7 time maid ushered me into the bridal business