Barely a week after their wedding, we managed to squeeze time into their very tight schedule to meet the Musiimes at their beautifully designed three-storey house in Buziga, which Edwin now calls home. 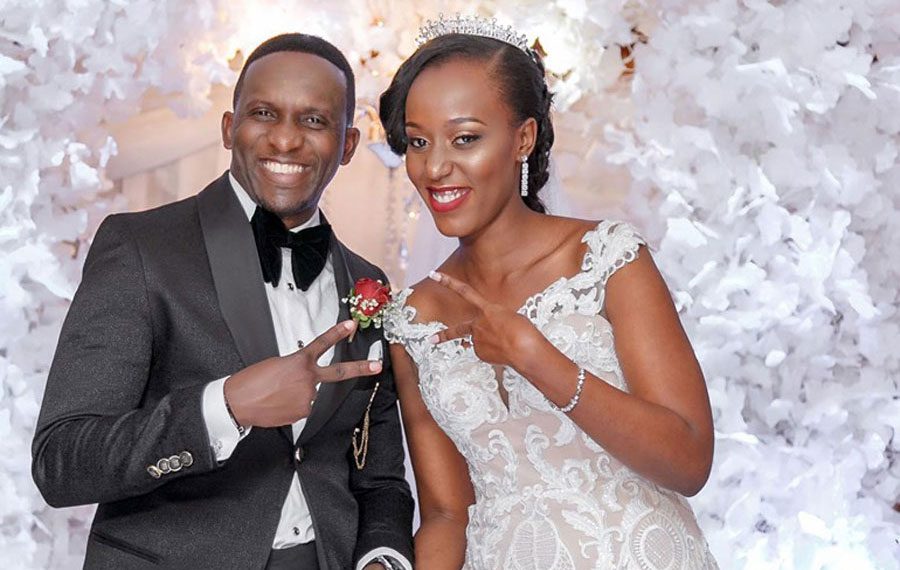 We find the couple organising an appreciation goat roast for close friends and family. With all the preparations and cooking going on, it is hard to steal Christabel from the kitchen but Edwin leads me on to the terrace where I make myself comfortable and not before long, he joins me with apologies that we won’t be starting the interview with his wife, but rather, she would join us later.

Considering the probing and negativity that has been making rounds on social media about their union, I set out to start the interview with caution, however, by the look of things, Edwin is calm and ready to share. 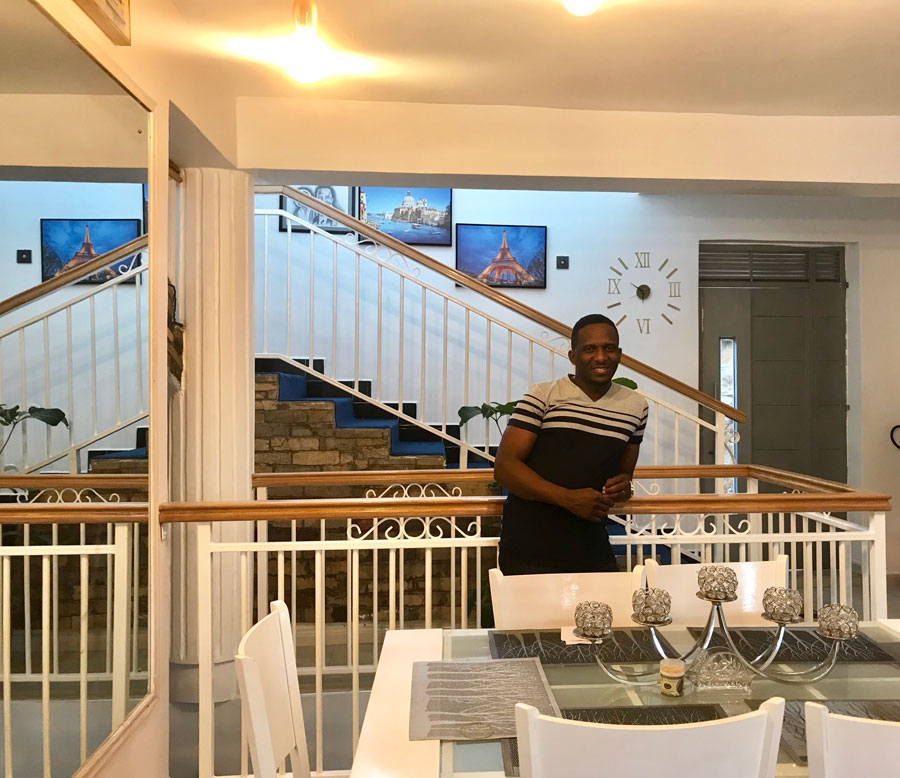 Starting with the biggest elephant in the room, I, on behalf of all the questioning voices ask Edwin what went wrong in his first marriage.

With a deep breath and a low but collected tone, he replies,

“I don’t want to go into extreme details of what did or did not happen in my first marriage. I have seen a number of criticisms on social media but life has got its numerous challenges. If there is anyone in life who aspires for perfection, that is me and when I set out in that marriage, I wanted it to be the very best… but there is a way life panels out and you can never know what tomorrow holds whether Christian, non-Christian, pastor, non-pastor, believer, non-believer, priest, or any social class.”

Edwin doesn’t hesitate to comment on the controversies surrounding his first marriage.

“There have been all these false allegations; some saying I was gay in my marriage! Never!,” he says, spitting out the words and adding, “Apart from spelling the word gay, I would never imagine being one. I condemn, highly, gay-ism – I don’t condemn gay people. You hate the sin, you don’t hate the sinner. I will be honest with you, it disgusts me to be called that – horrible!”

About allegations that he left his wife because she had gained weight, Edwin shakes his head and says, “…Those are silly phrases that people come up with! Unfortunately, we are in a world of social media where people pick up a headline from any media outlet and run with that.”

He also reminisces a time when ‘some’ newspaper ran a headline: ‘Pastor Edwin the worst dad, says ex-wife’ that was followed with accusations of abandonment and neglect of his family.

“But the day that headline broke, I had just picked my daughter from school when someone called me about it. I went to the supermarket and picked the newspaper, and I was crying. Through my shades, my daughter could see the tears. She asked me, ‘What’s wrong dad?’ and I told her I had splashed something in my eye. Now, this paper was condemning me of being the worst dad, according to my ex-wife – who had said nothing to them!

I am not trying to victimise myself here, but I have been a victim of all sorts of media statements,” Edwin says. 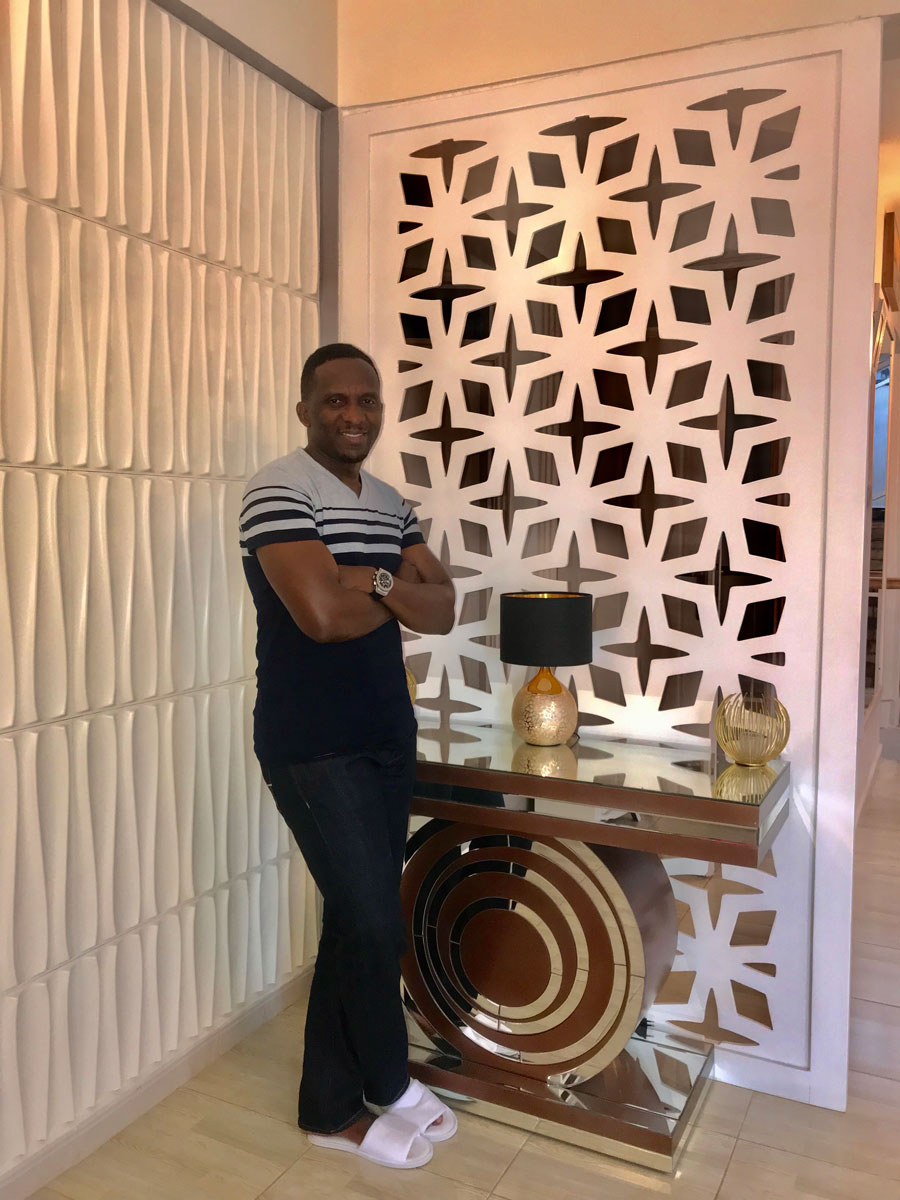 “No one ever walks down the aisle in anticipation of a divorce, and I hate how people satirise it or put it out like it is an adventure. Divorce is so painful. I could say that our first two years of separation with Isabelle were the most painful seasons I have ever experienced in life. For a whole year, we tried to fix things, and it just wouldn’t work. I can’t explain much of why it couldn’t work, but it just couldn’t,” he says, with a pained face.

Quickly, he highlights that he doesn’t condone or encourage divorce, neither does he wish it for anybody.

“Peacefully, we agreed to go our separate ways and the divorce was finalised two years ago. At the moment, she has moved on with her life and she is happy, and I have moved on with mine and I am happy. I repeat, divorce is a nasty thing and whereas people may have imaginations and thoughts that I chose the easy way out, that’s not the case. There was no easy way out. It has been tough on our little girl and I bless God that she came out strong,” he pointedly says.

Edwin also shared that fortunately for them, they have been able to forge a way for the sake of their daughter.

“We have open communication, we talk about everything about our daughter, and whatever happened then, happened then, and regardless of any condemnation anyone would want to lay on us, we are okay. Personally, I have gone before God. I have repented and reconciled with my God. Now, about the men and women out there, I don’t give much of a care,” Edwin blatantly says. 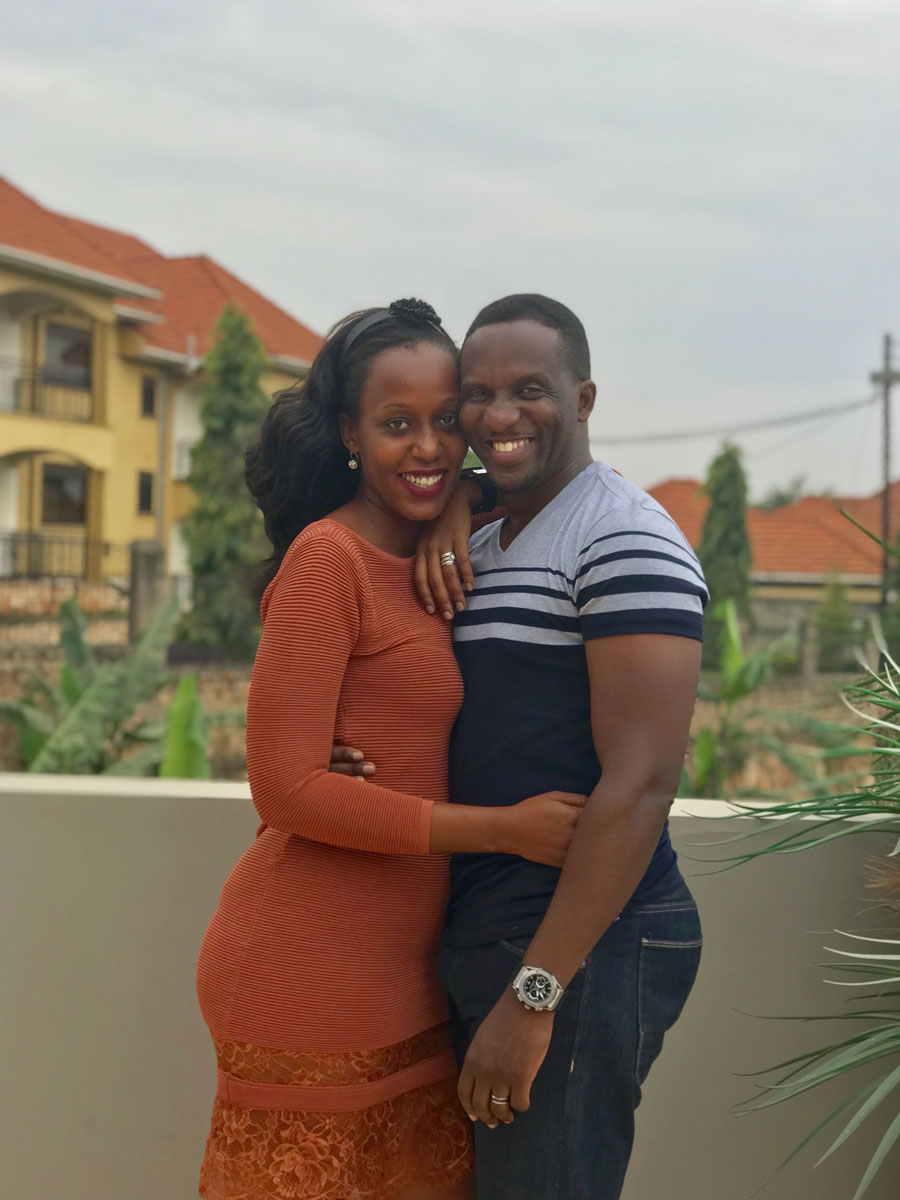 Its new beginnings now for the couple, and I want to hear about the genesis of this love story and how they met, so I ask.

“My company, Crest Group, was recruiting a Brands Manager and a content Manager for The Property Show. We had interviews and Christabel got the job. That was three and a half years ago,” he recalls.

A year later, Christabel grew into being the co-host of The Property show with Edwin and they both note that they maintained a professional relationship.

“I am a person who appreciates a young family, being able to raise my children and grow together with them, so I started seriously feeling that I needed to have someone in my life. The trouble was, I am always on the plane and while in town, I am always between home and work. I had no time for dating and a few times my friends would set me up for blind dates, I was too picky,” he frankly explains.

“As time evolved, Anita who happens to be my best friend, [and best lady] would joke that, ‘Mr CEO, that lady…’ and I would tell her, ‘C’mon Anita, no! Our offices at Tirupati Mall are opposite Anita’s office and Christabell would constantly receive flowers. Anita would jokingly say, ‘Edwin, you are going to wake up one day when someone has taken that girl, and you are going to kick yourself so hard’ But still, I said no,” Edwin shares.

Before long, he started to notice Christabell and how hardworking and passionate she was. About a year and a half ago, the two became closer friends, away from work.

“We would have coffee meetings outside work, talk and catch up.

But one day, while travelling to the US, it hit him! The realization that what he was looking for too badly from outside, was within. 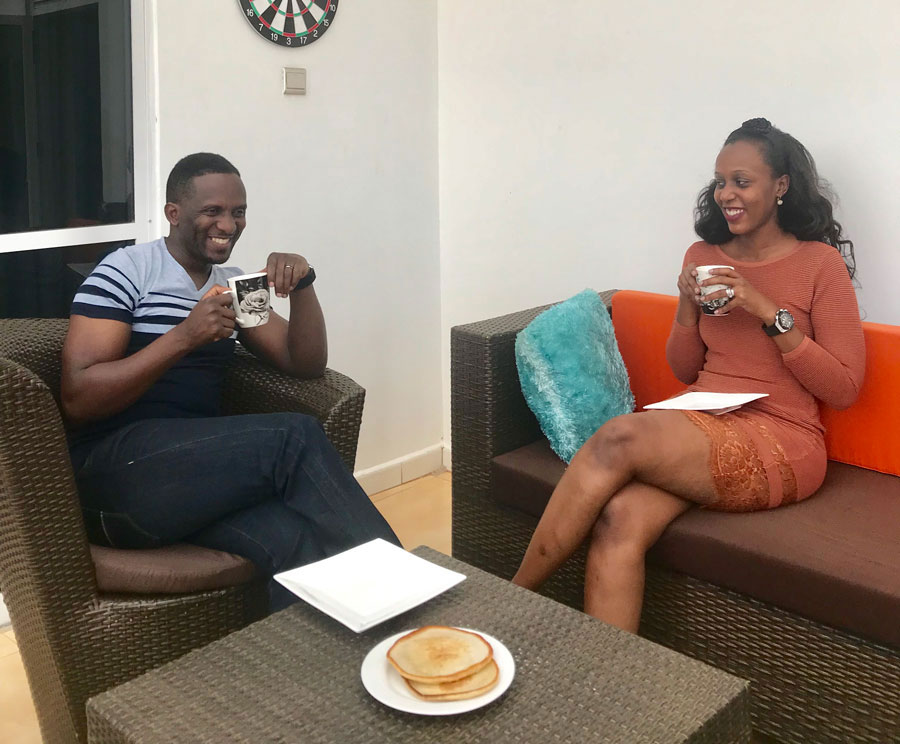 “So, I started to think about Christabell in another way. When I came back, I asked her out for a date. That was in October last year. On the same date, I told her that I liked her and that I was having this idea of ‘us’. She told me, ‘you know I work for you, and with you.’ And I told her, where is that written that we can’t be together? Edwin shares. And whereas he knew about the ‘no dating at work’ rule in the corporate world, he wasn’t one to be confined by it.

A month and a half later, when he met with Anita and told her that he wanted to propose to Christabell, she was equally surprised.  “When she asked whether I was sure, and I was, we set up the engagement a few weeks after Christabell’s birthday in the guise of celebrating her belated birthday. I got on one knee, asked her to marry me and she said yes,” and the rest is history, says Edwin. 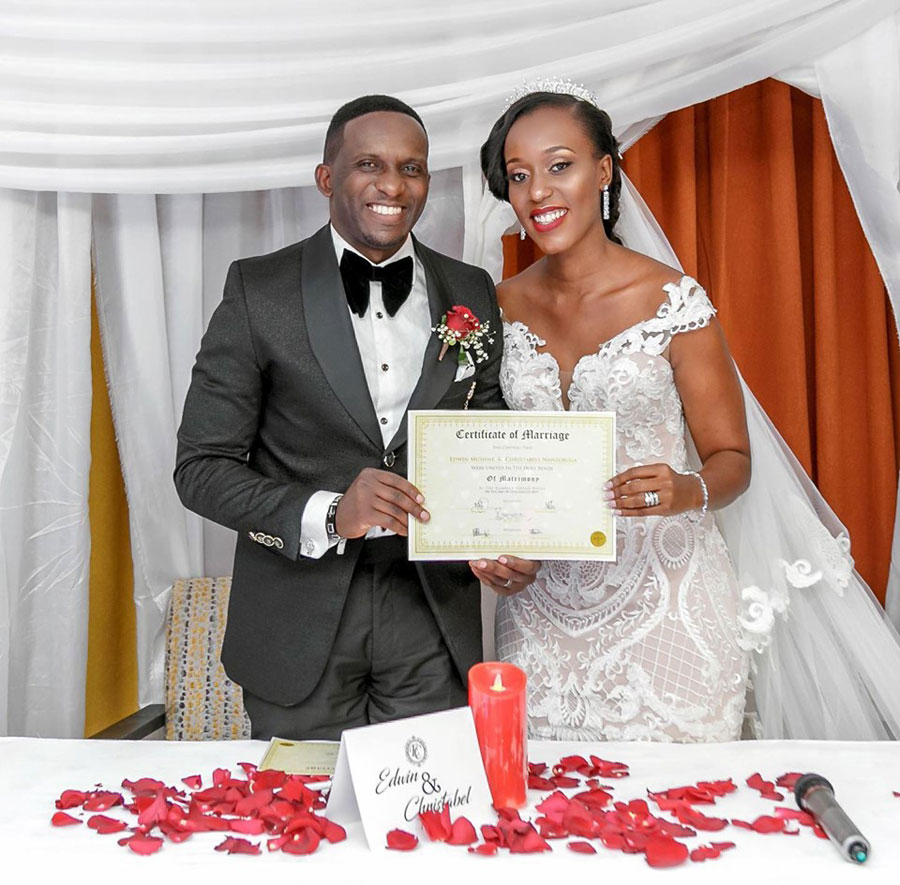 Another of the numerous questions on social media was why the Musiimes never had a church wedding as he did during his first wedding and he throws light on the same.

“On Thursday, 8, we had our civil vows at URSB. All marriages in all churches of every denomination have to be validated by the same office. The only difference is that I chose to go there physically and have my certificate there and then. That same Saturday, we went for our pre-wedding boat cruise and chose Kampala Serena to have our wedding vows. What does the bible say? Where two or three gather in my name, I will be there in their midst. All I needed was God’s presence, and for all the people who say that Jesus was not there, oh did I feel him,” Edwin says.

He added that Pastor Bruce and Sharon Oliver who led the service at the Serena are his mentors.

Having a best lady? 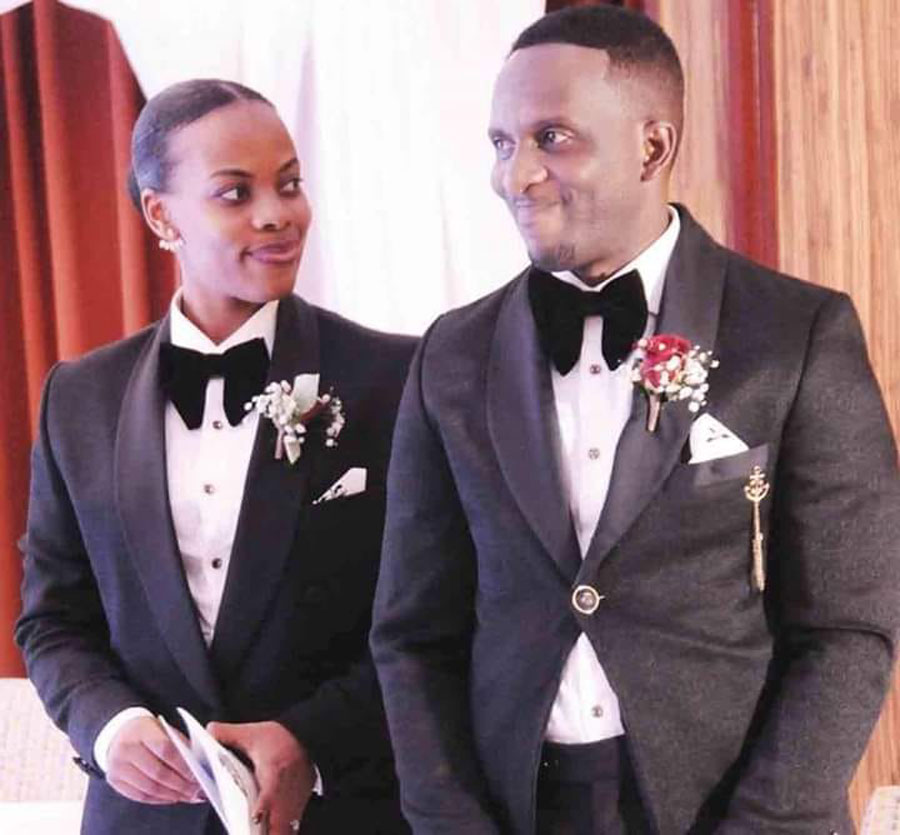 When it came to talking about his choice of a best man, again, Edwin was shocked that the world was up in arms over this.

“My definition of a best man was simple: this best person in my life, someone who has got my back, cares about me, prays with me through things, has been there through my thick and thin, and that is Anita to me. But we are in a society that does not believe that a male can have a best friend being a lady and the reverse, but that is not my thought process. Fortunately for me, Anita was equally a close friend to Christabel, so the moment my bride was okay with it that was it. And about how she dressed; a lady who is going to work can put on trousers but when it is Musiime’s wedding, it’s evil?” he wonders. 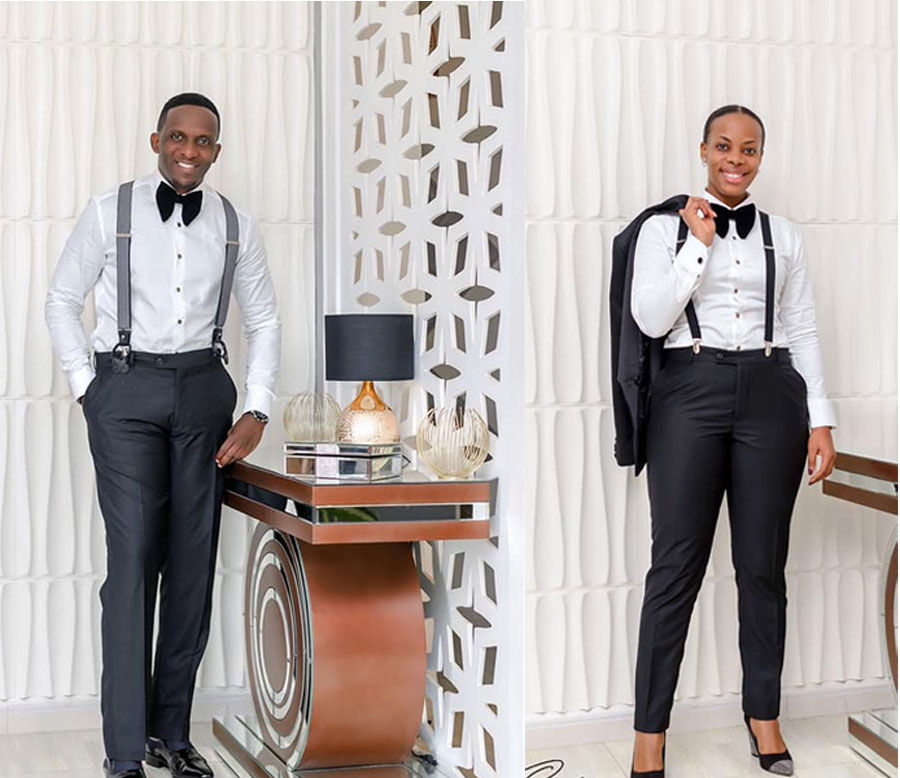 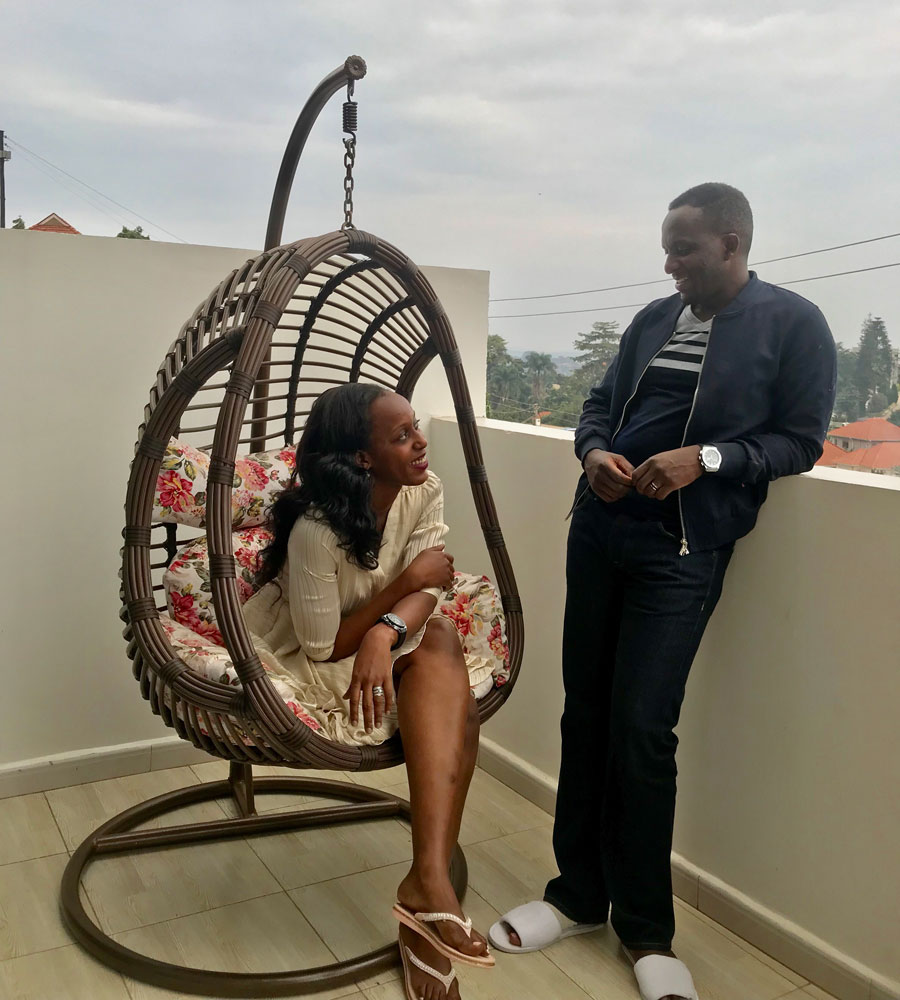 Amidst the busy afternoon preparations, Christabell was able to join us and she seems equally calm and welcoming. She also doesn’t differ from Edwin about how everything started.

“When he invited me for dinner, I was walking on eggshells of; dinner – you like me, or dinner- we are seeing a client? I then asked him which client we are meeting, and he said, ‘just me and you.’ It was just shocking! Apart from work and clients what else was there to talk about?

But things progressed in a funny way because we were already friends. His young daughter was a close friend to me. When I say young and close friend, it sounds weird to many, but though young, she has her own mind and her own thinking. So it was easy for me to fall in love with her.

Of course, there was tension of, ‘now I am treading on a thin line, this is my boss and then he is asking me out’ Yes, the feelings were there, but there was that fear of; ‘what are my fellow employees going to say, and all that.’

Christabell doesn’t look at Musiime’s first marriage like most people do.

“I look at it as a part of his life that he once had but is now something different. I believe he doesn’t see her as his first wife because she is still in our life. So, there is no first, there is no second, we are one big family.

We decided to have a friendship. I remember when he asked to date me, I talked about it with her [Isabelle]. She was okay with us dating which was a good thing.” 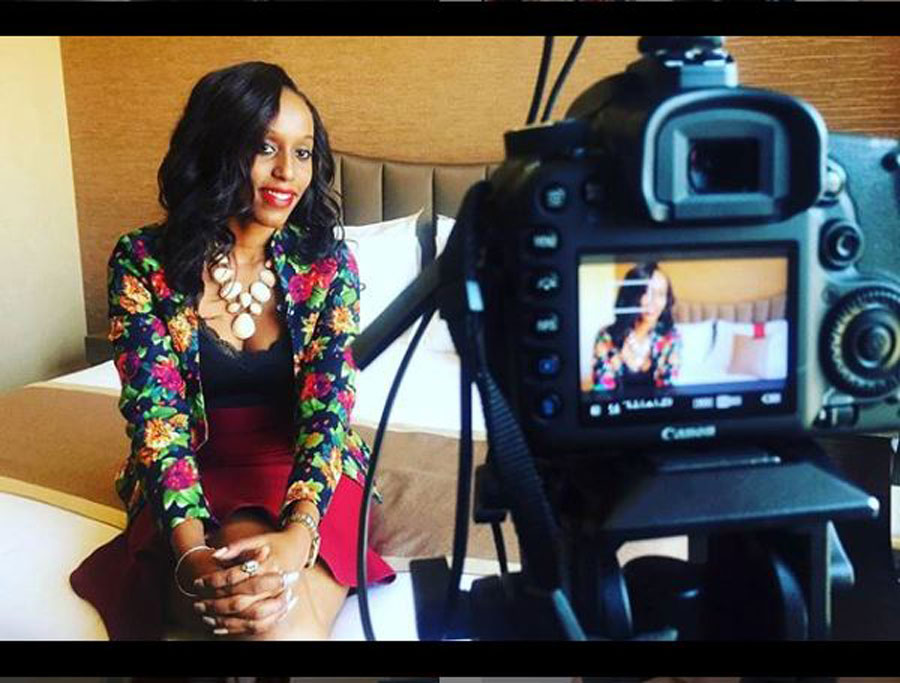 Christabel explains that there is nothing that is going to change at work.

“In the office, I am the Brands Manager, I am a co-host. He is my boss, my CEO, so, there is nothing more I am anticipating, “she says.

“And while the world rumbles on, on social media, we are fine and happy,” Edwin concludes.

Hired to prepare girls for marriage: Acting the Senga role