Joel Junior Papa and Ronah Nakalanda walked down the aisle as husband and wife on May 15, 2021. Their romance started during the lockdown. Sparks of their love often went off during times they spent together going to places, at church, and during the little visits they made to each other. 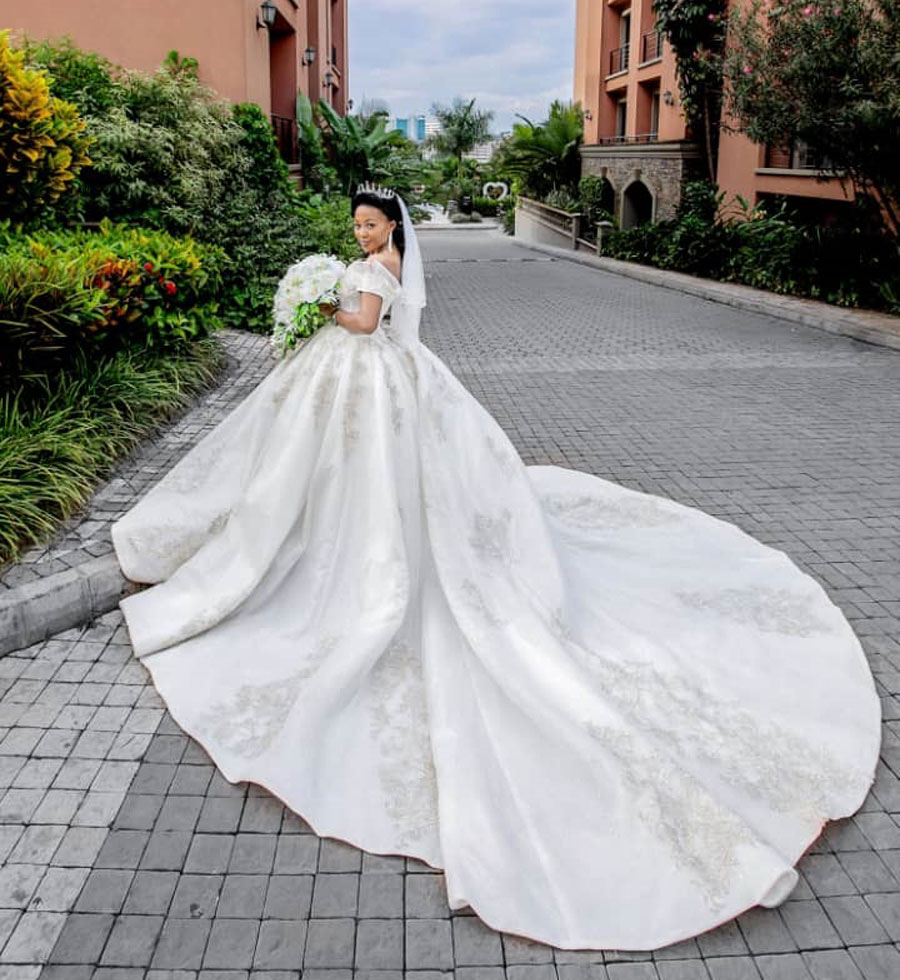 Papa proposed to his girlfriend in April 2021 at a place they loved visiting, Aquarius Kigo Resort. He had her best friend make her believe that he had travelled back to his country, Kenya. They hadn’t seen each other in 2 days. The girls went to the resort and as Ronah was coming down with the lift, behold, Papa was there waiting with flowers. Her friends and family were there too. He proposed!

Getting ready for the ceremonies

After proposing in April, Papa informed Ronah’s parents that he’d visit in May, which was one month later. He used that time to get himself and the finances ready. The couple had no wedding planner. They rather distributed roles among family members. They had a décor person who had worked on the proposal and got a photographer off Facebook. As the groom is a perfectionist, he was able to pull things together almost on his own, and voila… the celebrations started! 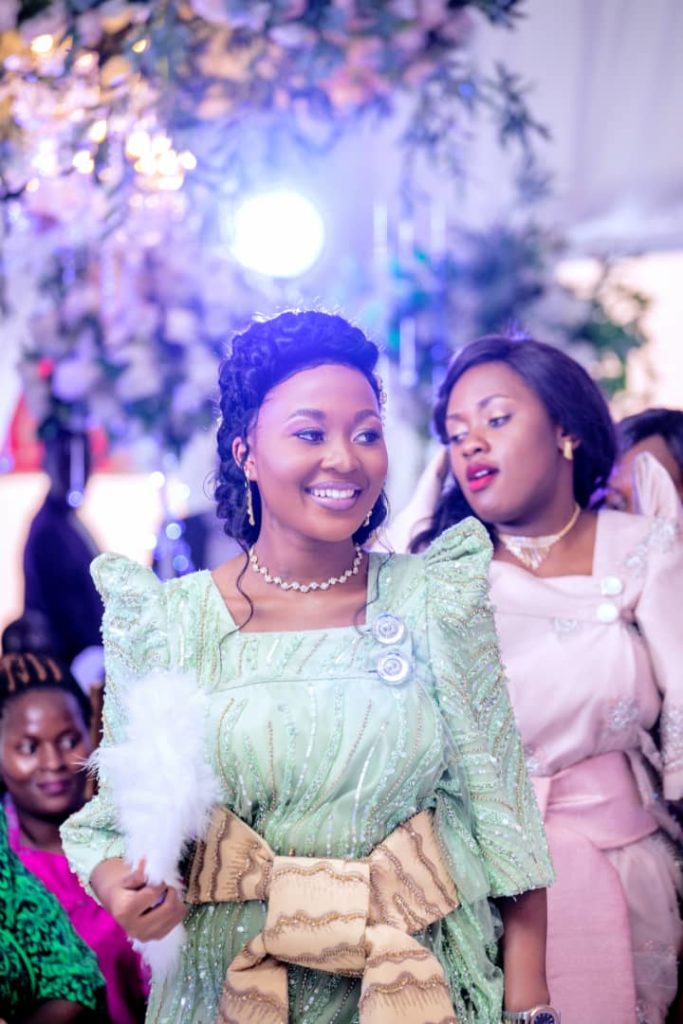 Kwanjula happened 2 days prior to the wedding. It was Papa’s first time to wear a kanzu as it’s not his tradition in Kenya. However, he didn’t find it too hard to fit into the ceremony; Papa has a spiritual family in Uganda so they briefed him about what to do and how to do it. He confesses that kwanjula was an interesting experience. It was planned together with the wedding as the two events were very close to each other.

What Papa found most fascinating was the exchange of vows with his father-in-law, picking of coffee beans, and watching his lady coming out 4 times; she looked amazing. He hadn’t expected her attire to be so expensive… It was. Initially, Papa thought the Buganda wedding events were not as costly as those of other tribes but he says he was wrong. In the end, everything was on the high end.

Among the gifts he took to his wife’s parents were a cow, a 4K TV, a fridge and more.

Ronah was mainly overwhelmed by the movements during the kwanjula preparation as well as the last-minute anxiety; she’s the first in her family to go through this process. She loved it. 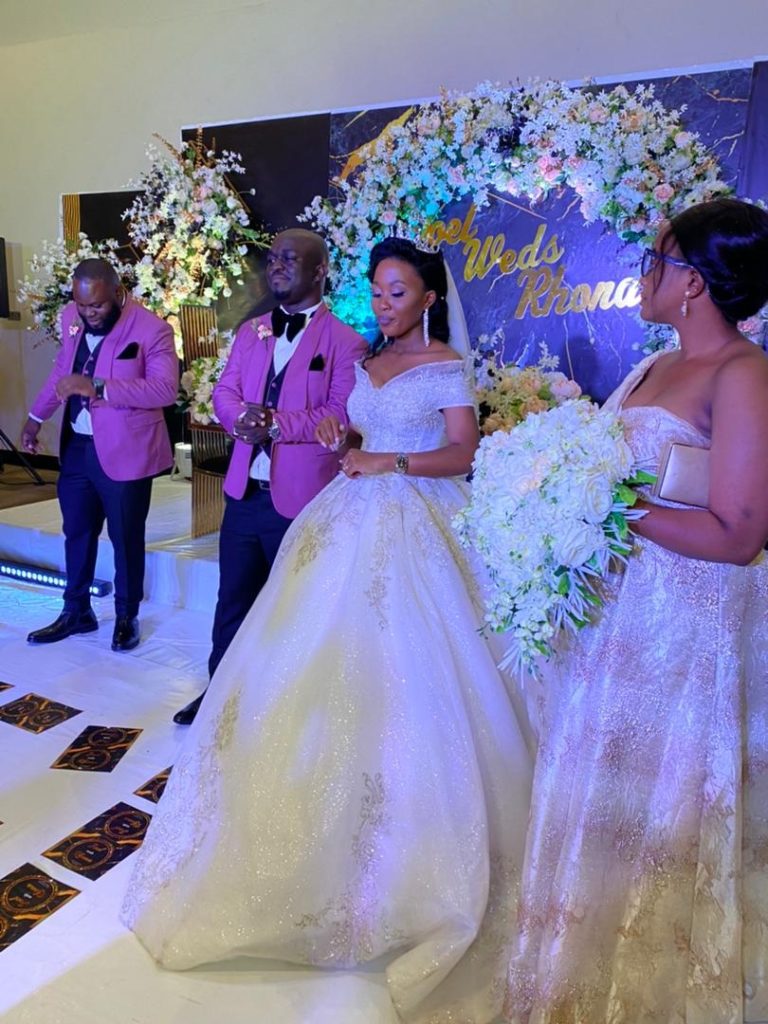 Guess what! The groom woke up on his wedding day and realized he hadn’t bought shoes. Luckily, he had a friend who sold shoes so he got sorted. His parents landed in the country on the morning of his wedding day. The groom organized for their pick-up but the person in charge didn’t make it to the airport. The confusion! Well, the groom had to drive and pick up his parents.

“I was a bit anxious but my parents’ presence really motivated me. I remember breaking down when I was told an hour to the wedding, that the cars were not coming. My dad encouraged me to cry. He said, cry, you’ll feel better after.” The couple was lucky to get some vehicles to use for their wedding.

As if that wasn’t enough, the reception had to be changed when there was very little time left to the wedding.

Initially, the reception was set to take place at Speke Resort Munyonyo, but that wasn’t possible because the President was there at that time. The venue was changed to Mestil Hotel on the last day. The cards were already printed and sent out; the card said the venue was to be at Speke Resort Munyonyo. The couple had over 200 invited guests for the wedding. Nevertheless, the reception was amazing! Everybody was praising it for its beauty.

Back to the start of the ceremony, the two friends shared vows and became husband and wife at CovenantNations Church, Luzira.

“At church, I got to the door and felt like crying… Walking down the aisle at church is something I was really praying for. When I was taking my vows, I remember looking at her and giving her the ring. I had dreamt of this. She’s my best friend, someone I had prayed to God for.” Papa narrates

Later that day, the couple together with the groom’s parents took to his house to share in a prayer that blessed the newlywed couple. The couple later went to Speke Resort Munyonyo and spent the night there followed by days that made a week. That would come to be known as their pre-honeymoon. Next month (June 2021), they’ll set out for their official honeymoon in Bali.

The bride says she was so tired that night on her wedding night, she had forgotten to eat in the morning while she prepared for her wedding. She’d got so hungry in between the ceremony and she was overwhelmed with both happiness and the day generally being huge. The groom had to work in the night after the wedding. Oh dear!

We wish the couple a cheerful marriage.

Tips to ensure your wedding reception is fun