ANNIVERSARY. Robby Muhumuza, a counsellor and communication consultant and Anne Tukamuhabwa have been married for 33 years. The two met during their studies at Makerere University. They have three children and four grandchildren, writes CHRISTINE KATENDE.

When did you meet Anne?
Robby: We met in 1981 at Makerere University when I was completing my course (Bachelor of Arts Literature in English and a diploma in Education). Anne had just joined the university to pursue a Bachelor of Education. We used to meet every weekend for fellowship at St Francis Chapel. I was later posted to Kitunga High School in current Ntungamo District for teaching practice. Coincidentally, we met there during her first year holiday. My feelings for her grew stronger.

Was that when you approached her?
Robby: No, the university invited me to work as a teaching assistant because I had emerged as one of the top two students in my department. This gave me chance to meet Anne again as she continued her course. We continued to relate. I was staying at Dag postgraduate hall and since there were no mobile phones, I would visit her at Mary Stuart once in a while.

When did you then propose to her?
Robby: One evening, in 1984 I went to visit Anne at Mary Stuart to propose to her. She prepared for me juice, g.nuts and bananas. When her roommate walked out, I disclosed my intentions but she said I had delayed and she was in a relationship with someone else. I felt downcast. 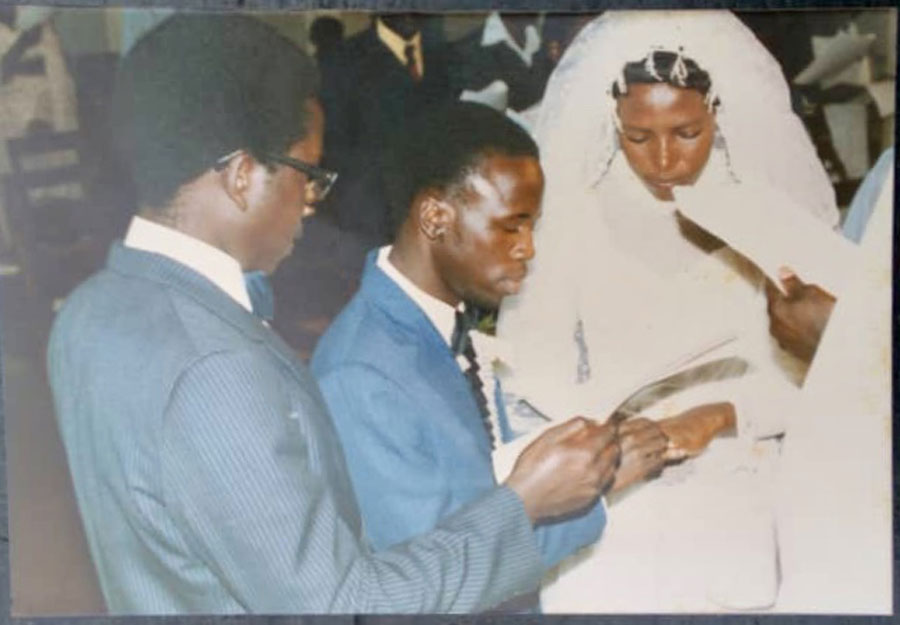 Anne, what were you feeling?
Anne: I was caught by surprise and wondered why me of all girls in the Christian union. But I told him I was in a relationship.

How did you carry on after?
Robby: I could not imagine missing to be her husband. She accompanied me but the journey to my place became the longest. My roommates were anxiously waiting. I broke the bad news, suddenly got a fever. I was bedridden for a week. I later gained courage, met her and requested that we remain friends, which she accepted.

How did you meet again to become husband and wife?
Robby: After her graduation, Anne went to teach at Bweranyangi Girl’s Secondary School in Bushenyi. That was when I also got a Master’s scholarship in the US. She however sent a letter informing me of how she had ended her relationship. This gave me a green light. I withdrew part of my savings, travelled to Bweranyangi to propose again and she accepted.
Anne: I had ended the relationship before leaving university after realising that things were not working out. I continued to pray for the right man and wrote to Robby. By the time he came to visit me, I was ready for him.

What did you like about each other?
Robby: She is charming, with a good personality. Anne is soft, generous, serious, reliable, God-fearing, brilliant and not a gossip.
Anne: He is a Christian, gentleman, serious, and ambitious.

For how long did you date?
Robby: We did not have time to date. Having secured a scholarship to go for further studies in 1985, I thought it wise to wed before travel as this would ease her joining me.
How did you do it?
Robby: I went to Kanungu District to see her parents. We negotiated bride price and the wedding followed.

Did everything go as planned?
Robby: Although her parents were fine, my father was against it. He wanted me to first complete my Masters, and establish myself. I convinced him until he agreed to accompany me to Anne’s parents. They asked for seven cows (bride price) but we paid four. I requested my father-in-law to allow me clear the balance later, which he agreed to. When I travelled, I saved money and cleared the balance on return.

When and where was the wedding?
Robby: Bishop Edward Muhima wedded us on June 29, 1985 at St Francis Chapel, Makerere. We hosted about 300 guests at the University Main Hall and finished by 6pm. That time Museveni was in the bush and was about to capture Kampala.

How did you plan for the day?
Robby: I mobilised funds from friends. We had soda and used a Mercedes Benz that belonged to Stanislaus Okurut, (Mary Karooro’s husband) and Bishop Zac Niringiye offered to drive us.

Did you have a photo shoot?
Robby: The bridal crew went to Pool Road for salon services. After, we drove to Afro Studios on Kampala Road for a photo shoot and later proceeded to church for the service.

What did you serve your guests?
Robby: We served popcorn and cake, roast g.nuts and soda. We also used coloured toilet paper and balloons for decoration.

Where was your honeymoon?
Robby: A friend organised and funded four nights at Lweza Training and Conference Centre on Entebbe Road. After, another friend offered us a self-contained room at Centre for Continuous Education (CCE), Makerere where we spent two weeks.

What kind of gown did you wear? 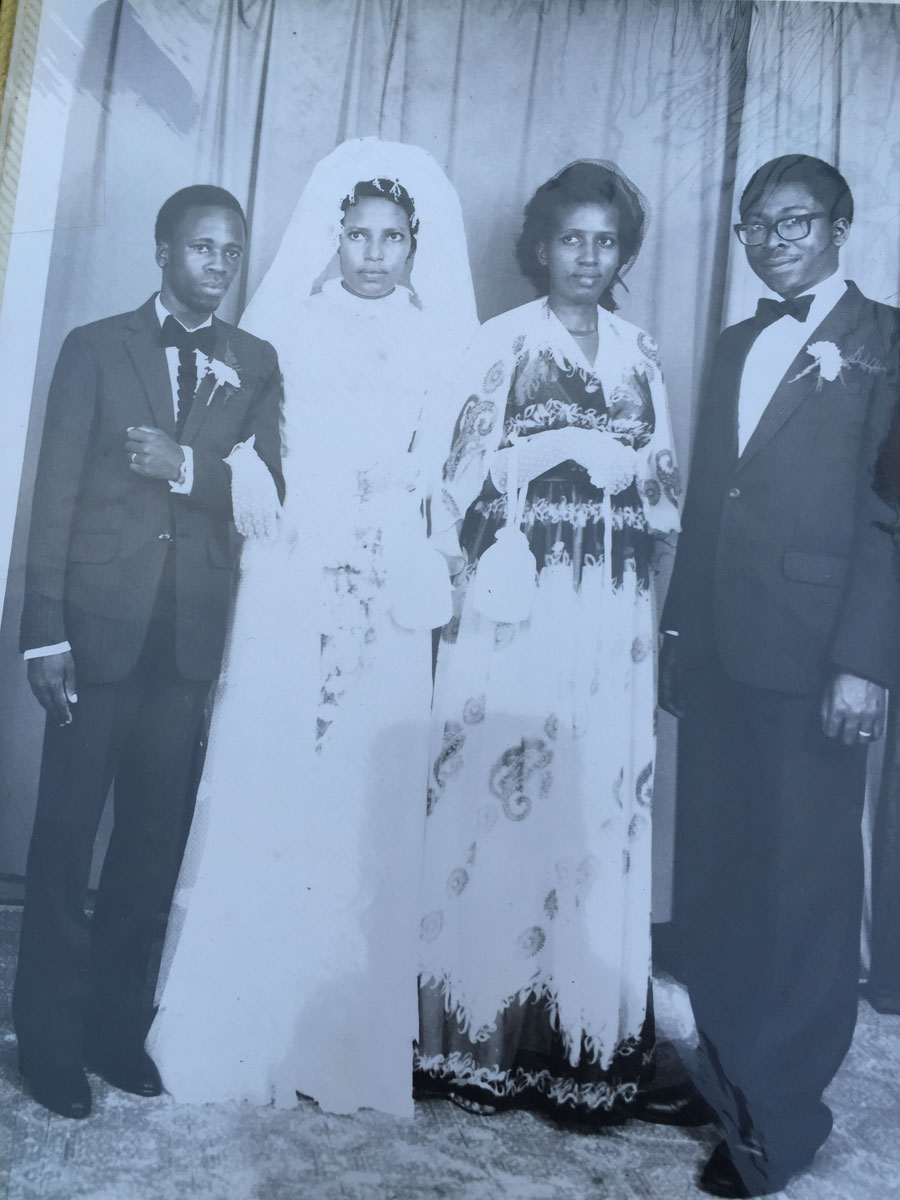 Anne: I used my friend’s pure white Cinderella gown, a tiara and gloves from UK. I had a white pair of shoes and later changed into a blue dress which was tailored at Shs10,000.

Who comprised your bridal party?
Anne: Margret Ndyagyenda, a friend who lived in Kenya.
Robby: Dr Benon Kyokwijuka was older and already married. He used his wedding suit and I just got a similar suit made from Kiyembe, I borrowed a bowtie and the shirt from another friend who was wedded.

How much did the wedding cost?
Robby: About Shs1m and we used gold coated rings which we bought at Shs1,000.

Was counselling vital?
Robby: Yes, Bishop Edward Muhima emphasised the need to know ourselves better, not forgetting our weaknesses and strengths. Zac Niringyiye also lent me The Act Of Marriage, a book which helped us. After the wedding, Kampala Pentecostal Church (present day Watoto) offered post marital counselling where things such as finances, sex, and raising children were handled. We also attend marriage conferences.

How have the 33 years been?
Robby: I have got to know Anne better, and the older we grow, the more we grow in love. Our marriage has become sweeter, she is my best friend, selfless, kind and we have the same values. We live in harmony. I respect her for who she is, and we hardly disagree. I invested in her further education, we travel together and share the same experiences.
Anne: Our love and devotion to God has helped us. I used to be an introvert but with his help, I learnt to open up and became a good communicator. My husband has a good sense of judgement; he is intelligent, and respectful.

How have you handled challenges?
Robby: I have been committed and faithful. I respect and believe in Anne. I listen to her suggestions and explanations. Despite our differences, we talk and sort things out. I always seek forgiveness for any shortfall. I remove barriers that would make her insecure such as registering properties in our names including bank accounts. We also have a joint will which indicates how the property will be shared.
Anne: We are prayerful and our communication has been strong. We openly talk about issues that arise, thus bridging the gap that might be created by anger. We have never needed a counsellor because we always handle our issues and those concerning children together. Being sacrificial has helped me.

What excited you most on your wedding?
Robby: When Anne accepted to take me as her lawfully wedded husband, I felt so special.
Anne: I cried. Things were happening so fast. 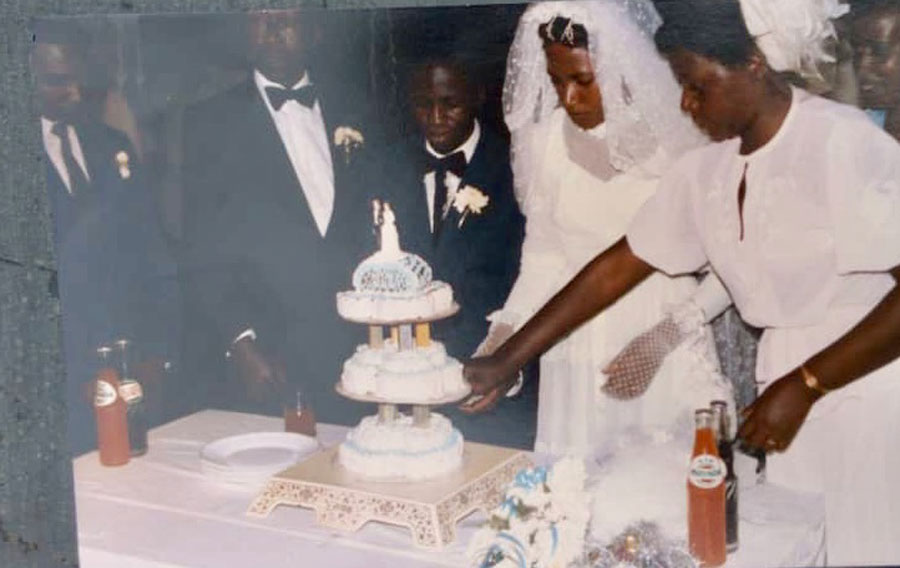 Given chance to redo your wedding, what would you change?
Robby: Nothing.
Anne: I would get a good but simple gown with my four children among the entourage. I would keep the function simple.

What do you think causes separation in today’s marriages?
Robby: Failure to know why people get married. Some enter marriage selfishly and with different intentions. Most men marry to change women’s personality which is hard. Men take their wives for granted hence feeling neglected. This has forced many to look for consolation.
Anne: Lack of role models where majority of women think walking out of marriage is normal. We need to know that once you get married, you cease to think about yourself but your partner. Entering marriage with a bad mind-set, lack of selflessness have sparked off separation. There is need to attend marriage fellowships and also learn to value your marriage.

Advice to someone getting married?
Robby: Go for proper premarital counselling so as to get prepared and ready for what you are going into. You will know whether the two of you are compatible or not according to your personality.
Anne: Pray for guidance, patiently get to know this person before committing.

Is counselling useful to a couple that intends to wed after living together for years?
Robby: Yes, there is always need to unlearn and learn new things that would take your marriage forward. Most men do not get chance to be talked to prior to marriage unlike women. In this case, counselling is important and gives room for improvement because marriage is beyond the two of you. There is always need for continuous counselling and learning at different stages of your life.
Anne: Yes, because there is still a lot to learn which will help you stick in there.
However, get a good counsellor or person to talk to in your marriage.

The difference between out-door and indoor wedding decor

What to do before inviting partner home for the first time- Spirit F.M’s Wesley Silver