When Sheba Atukunda was looking for a graduation venue in 2019, her friend offered a number to contact which happened to be Conrad Mutiti’s. When Sheba rang, Conrad asked her to come by the venue for a better opinion.

“The place turned out to be what I was looking for for the luncheon since it was graduation week. We struck a friendship and kept in touch even after the celebration. Our conversation was dominated by business and future plans, but it was not long before he started pursuing me,”Sheba says.

Conrad says Sheba gave great feedback about the hotel service. He got to know that she was a graduate of mass communication through a WhatsApp status update of herself doing public speaking.
“She seemed like someone who could do some marketing for the hotel. It was October, with the festive season approaching, we had to do some recordings for adverts for Nation Media Group-Uganda. They allowed us to do the production and forward it to them. I requested her to voice the adverts for the December season. She did really well,” he recalls.

Conrad, who is into public relations, had been invited to an awards ceremony when he asked Sheba to be his date. And, she accepted the invite.

“We kept talking and on December 4, 2019, I asked her to be my girlfriend,” he says, but Sheba asked to think about it, after which she accepted.

The proposal
On January 2, 2020, Conrad paid his first visit to Sheba’s parents. There they set the introduction date to May 8, 2021.

“For our proposal, it was difficult to get a camera crew ahead of us. The crew suggested different venues for the proposal but on that day, Sheba knew we were going for a memory lane photo shoot but she was emotional. I had to try and cheer her up,” he recalls. 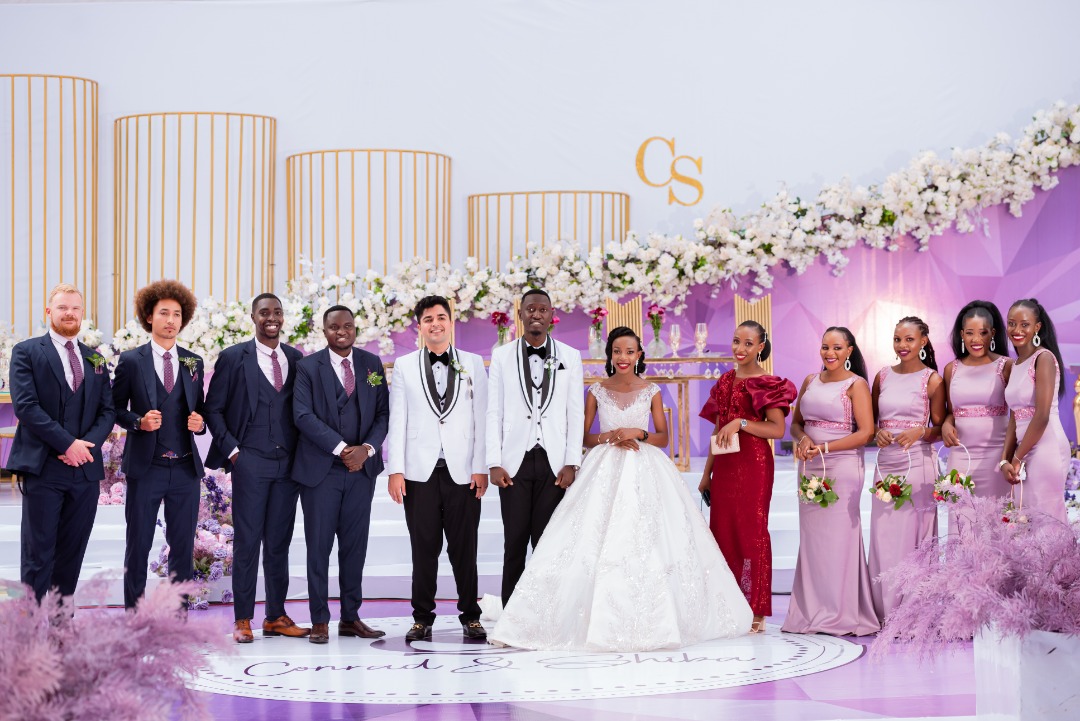 Sheba being a fan of waterfronts, the camera crew suggested Kalanoga Resort in Busabala. Despite Conrad’s preparations for the waterfront proposal, they were late because his girlfriend was not into the whole thing. This delayed the ideal outdoor plan.

“We arrived late and so they had to shift everything indoors,” he says.
Conrad notes that gladly the advance team was aware of the occurrences so, they helped to calm her down as they helped her change into different clothes.

“She went to change as I got ready at the proposal site. Voila! I proposed to her and she was shocked and excited and she could not say no,” Conrad says.

Sheba says they were supposed to have a pre-wedding photo-shoot in the morning but Conrad delayed. And so, the change in plan disrupted her.
“I asked these guys to postpone to the next day because it was late but they insisted. I did my make-up early because the shoot was supposed to be early but it was sunny.”

What calmed her down when they reached Kalanoga Resort was that the photography crew had taken pictures at night and they came out well.

The dates
The duo held the giveaway ceremony and wedding with one week in between. Asked why the ceremonies were closely organised, Conrad says “After our visit to Sheba’s family, her dad was very clear that after a giveaway, I had a maximum of one week to take her to church. While we were ready to do a giveaway ceremony as soon as possible, we could not do a wedding as soon as possible. This is because my siblings and my dad were abroad.”

They needed a year to set a convenient date for everyone. Conrad says they had to postpone everything by a year after the introduction ceremony in May 2021.

“Our parents were so supportive from day one. From the time I told my parents that I had a boyfriend, they were always there. I felt the pressure of doing my master’s and travelling between Kampala and Mbarara ,” she recounts.
She remarks that her friends supported her from emotional, spiritual, and physical to financial aspects.

The couple had a wedding committee which consisted of their close family because they had seen how dramatic wedding committees were.
“We organised everything with our inner families so the time we got people onboard, we had cleared most things on our budget, and we knew what we wanted. We brought them on for formality,” she says.

Conrad thanks people who had brilliant ideas.

The entourage
Sheba considered her closest family and friends for bridesmaids.
“It was hard to choose my two friends but I had to close my eyes and decide,” she says.
On the other side of the coin, Conrad kept revising his list of four groomsmen until the wedding week.
“I had good friends from high school I had not seen in a long time but had kept in touch. And if they were coming to the wedding it would be great to share the day with them,” he says.
He notes that he is glad he got it right in the end.

The preparation
The couple was given a 50-people guest list. Sheba says most people wanted to attend the wedding, not the giveaway ceremony.
“I invited all my friends for the giveaway ceremony. It was so hard to pick wedding guests because of the restricted numbers,” Sheba says.
The couple met all service providers and signed contracts to which they adhered.
“They gave us such a good time,” she commends.
Conrad and his groomsmen had their haircuts from Hair by Zziwa.
“On the morning of the wedding, they came to my room in Kampala Serena Hotel and did final touch ups on me,” he explains.

The Rev Jasper Tumuhimbise from All Saints Cathedral, Nakasero counselled the couple and encouraged them in their new journey.