by Nabanja Rashim
in Kwanjula
0

Considering the rapid change in trends and introduction of new fashion designs every season, a bride-to-be may have a big task when it comes to choosing the best traditional attire for her introduction ceremony.

Mariam Namujju says when the dates to her Kwanjula got closer, she kept panicking because she didn’t know where to start when looking for the perfect outfit for her big day.

My Wedding contacted some of the bridal designers in the game and they got to share some tips to look at when planning for your traditional attire. 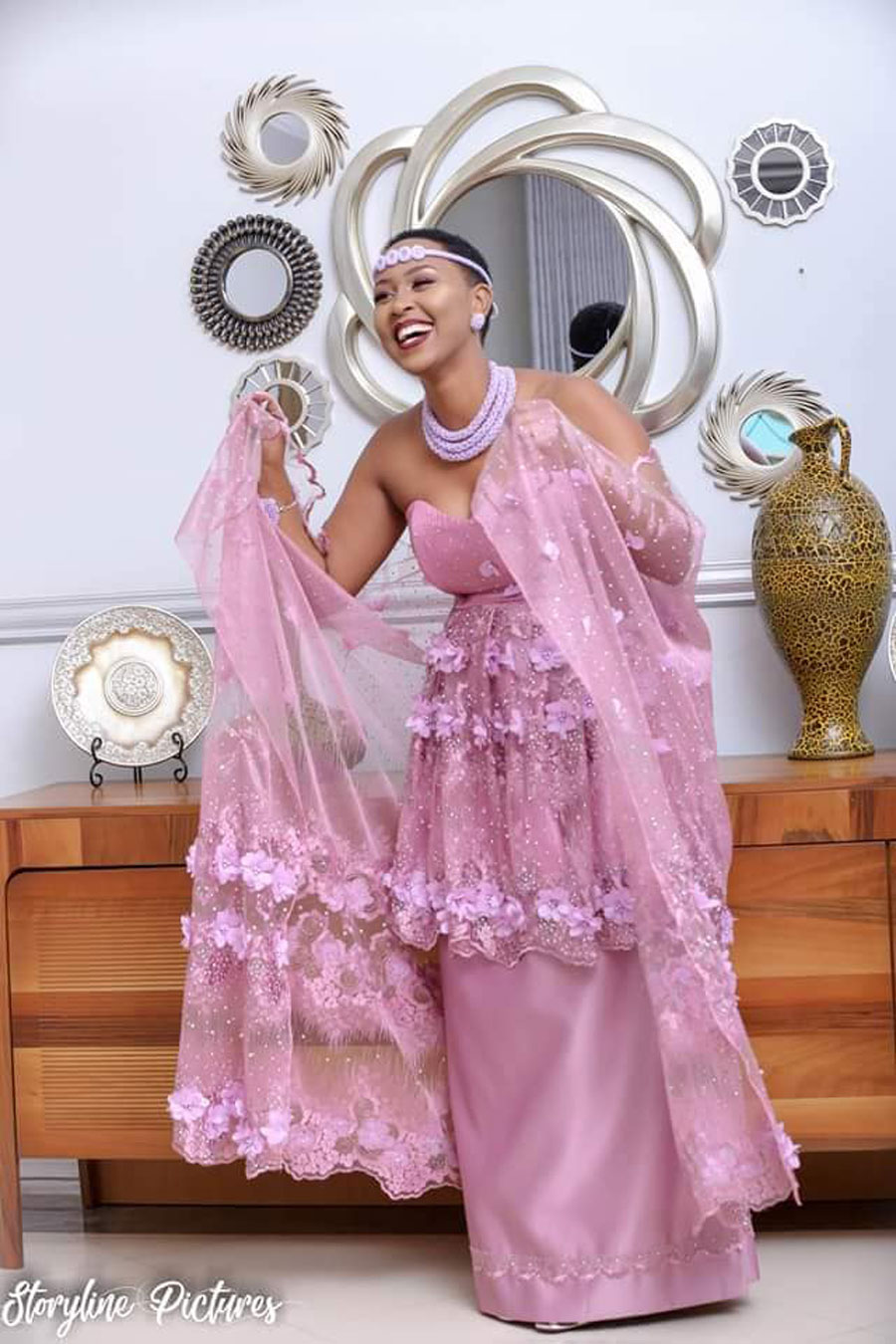 According to Flavia Twikirize, a fashion designer and CEO of Flashy Bridals, for a bride to avoid any regrets, they must have a mental picture of what they want to look like, however, they must also be ready to listen to the fashion designer.

“Having a mental picture of what you exactly want is not a bad thing but at times what you want may not suit you, so it is better to listen to a professional.”

Twikirize adds that most brides come with pictures of the outfits they want. However, some of them attires may not work for them.

“A bride may want a specific attire that she saw on someone with a different skin tone and when you try to convince her that the attire might not look good on her, she doesn’t listen to you”

Skin tones vary, the colors that will look good on a light skinned person will definitely not have the same effect on a dark skinned one. However much you might have what you want in mind, a professional’s advice is always worth lending an ear.

Hiring vs buying the attire. 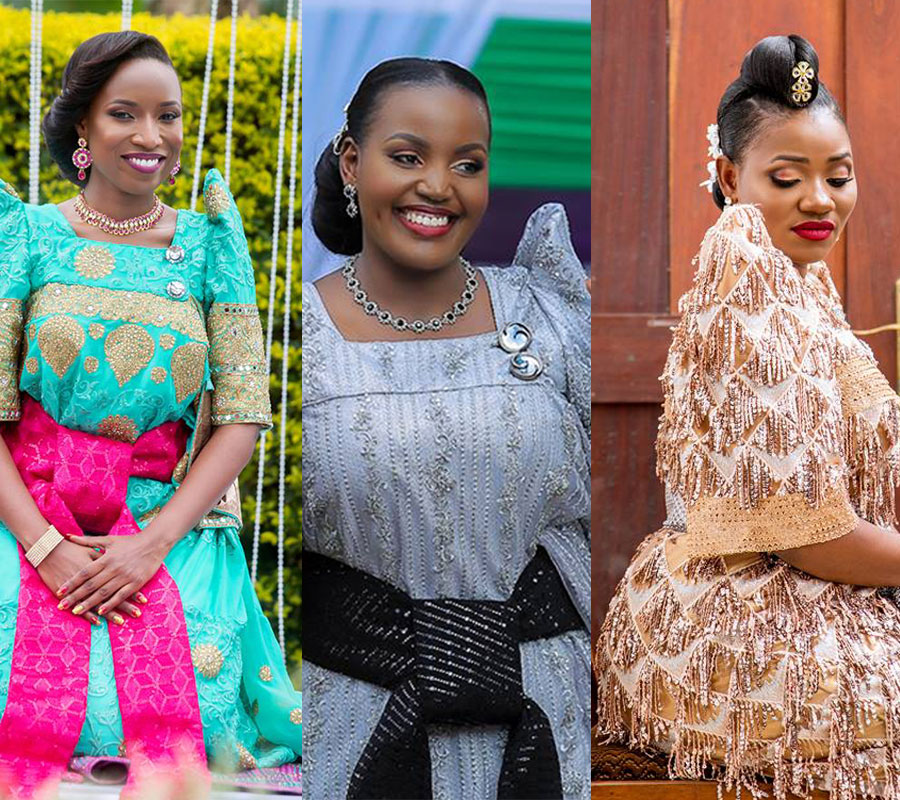 Twikirize says, the largest number of brides opt for hiring instead of buying the attire. This is because buying can be a bit costly and yet the attire may never be worn again.

Atwiya Babirye Abdul, also a fashion designer who owns a bridal shop at Sekaziga House around Kampala says she wouldn’t advise a bride to buy an attire for her introduction.

“Buying the attire is a total waste of money. Bride’s attires are usually outstanding and very eye catching. You are definitely not going to wear it to any other traditional ceremony because you might end up outshining the bride, so why would you waste the money?” she states.

However, a bride may decide to buy at least one attire or incase they bought material and made the attire, then they can pass it on to friends or family.

Where to get the fabrics 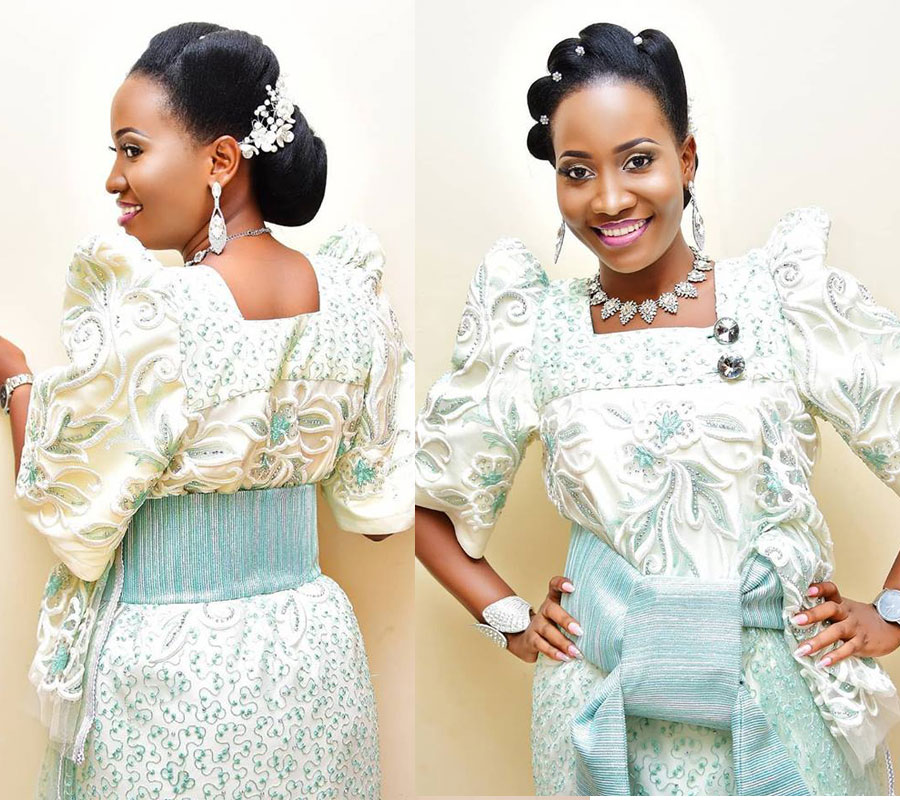 Some brides love being unique, so they would want to get themselves a custom made outfit. In this case, the fabrics are always available in different bridal shops around town. However, both Twikirize and Atwiyah say all the fabrics are imported from foreign countries. Some come from Dubai, China, India, well as others come from Turkey and Pakistan. 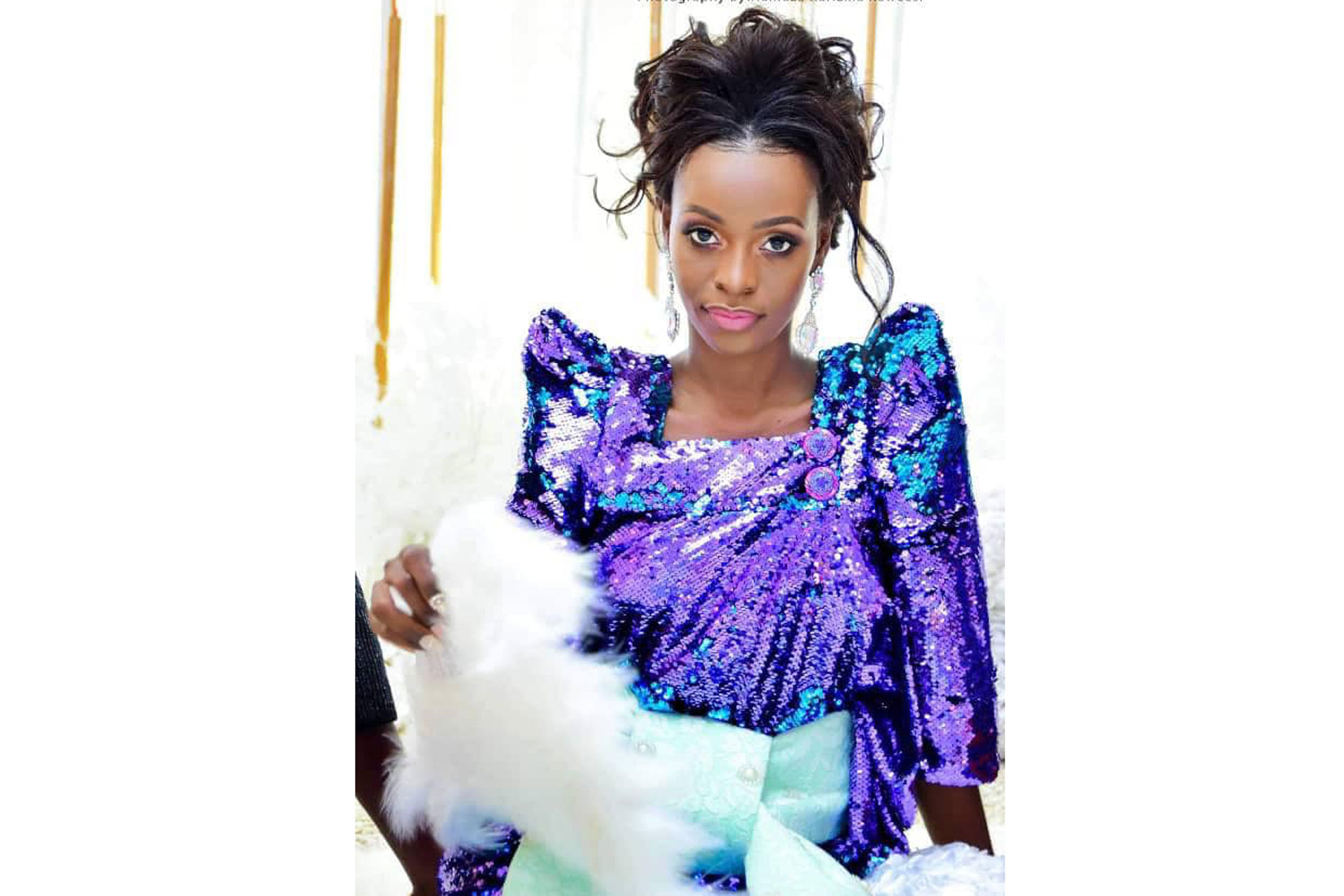 Twikirize says different outfits have different prices especially basing on their fabrics. But in case one is looking towards hiring an already made outfit, they range from Shs100,000 to Shs800,000. If one has decided to buy fabric and have her outfit custom made, it would cost Shs2 million to Shs3 million.

“Some brides want to be the first to be seen in an outfit therefore, you will have to charge them a bit differently.” 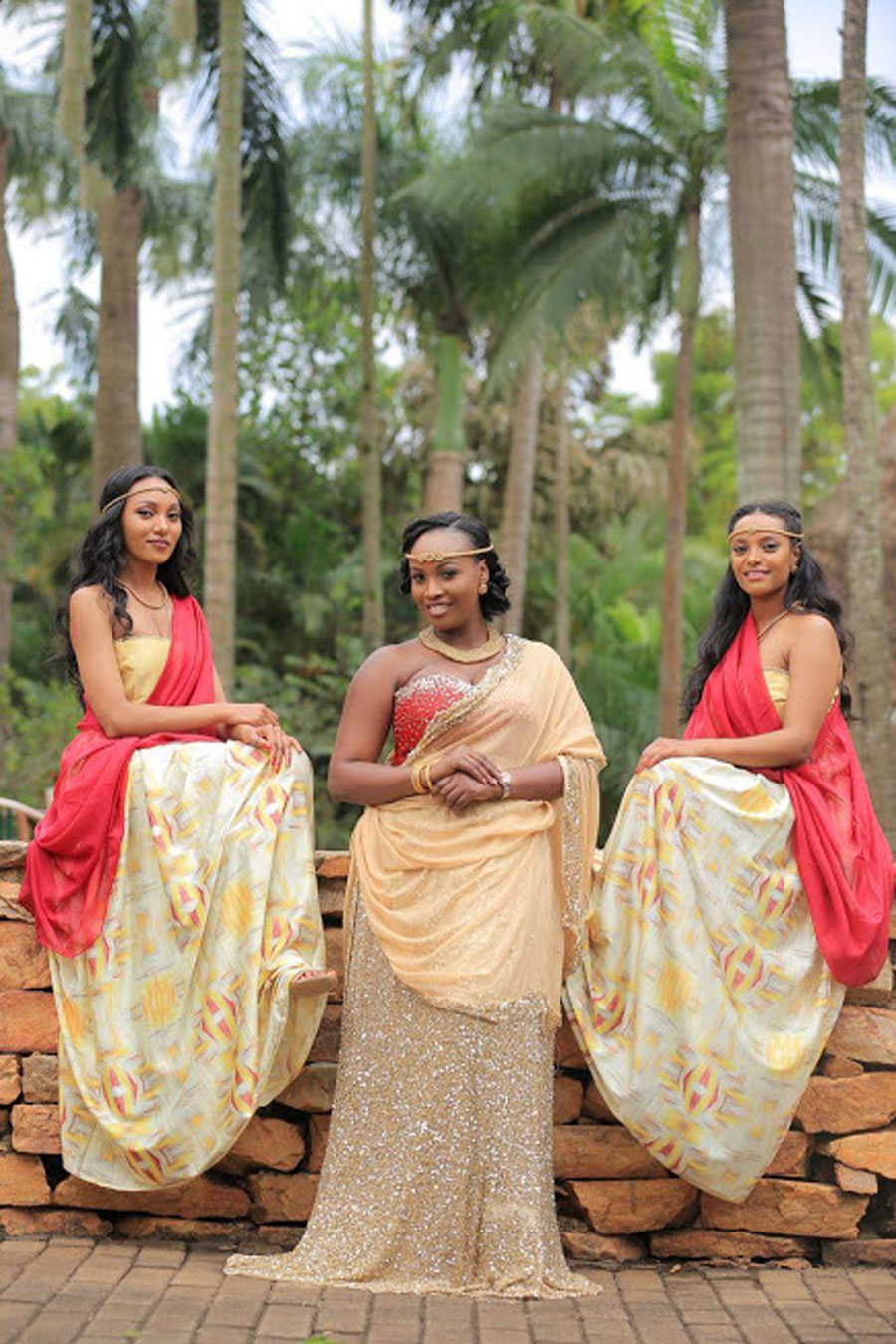 Twikirize advises brides never to trust just any tailor in case they have opted to buy fabric and have your outfit made.

“Bridal wear fabrics are very sensitive and can easily be ruined if the tailor is not careful. I advise that brides get a professional tailor that has been worked with before and can be trusted,” she advises.

According to Twikirize, the period during which a bride should start looking for their attire varies basing on the date of her introduction ceremony, and whether she is opting to hire or get it custom made.

“If she is looking towards hiring the outfit, then she should start looking a month earlier but if the bride wants to be the first person to wear the outfit, she should at least start six months earlier.”

However, Twikirize adds that if a bride wants to buy material and have an outfit specially made for her, then she should consider looking much earlier so as to give the tailor enough time to come up with a nicely made attire.

“Professional tailors usually take a period of 2 to 3 weeks in order to get done with sewing an outfit. This usually applies if they are not working on any other outfit but yours.”

Madrine Male is one of those brides that wanted to stand out on her ceremony, so she decided to have her kwanjula outfit tailored specially for her.

“ My designer had to import my material which took a month to get into the country, and the tailoring took two weeks. I was lucky I acted early otherwise time wouldn’t have been enough.” 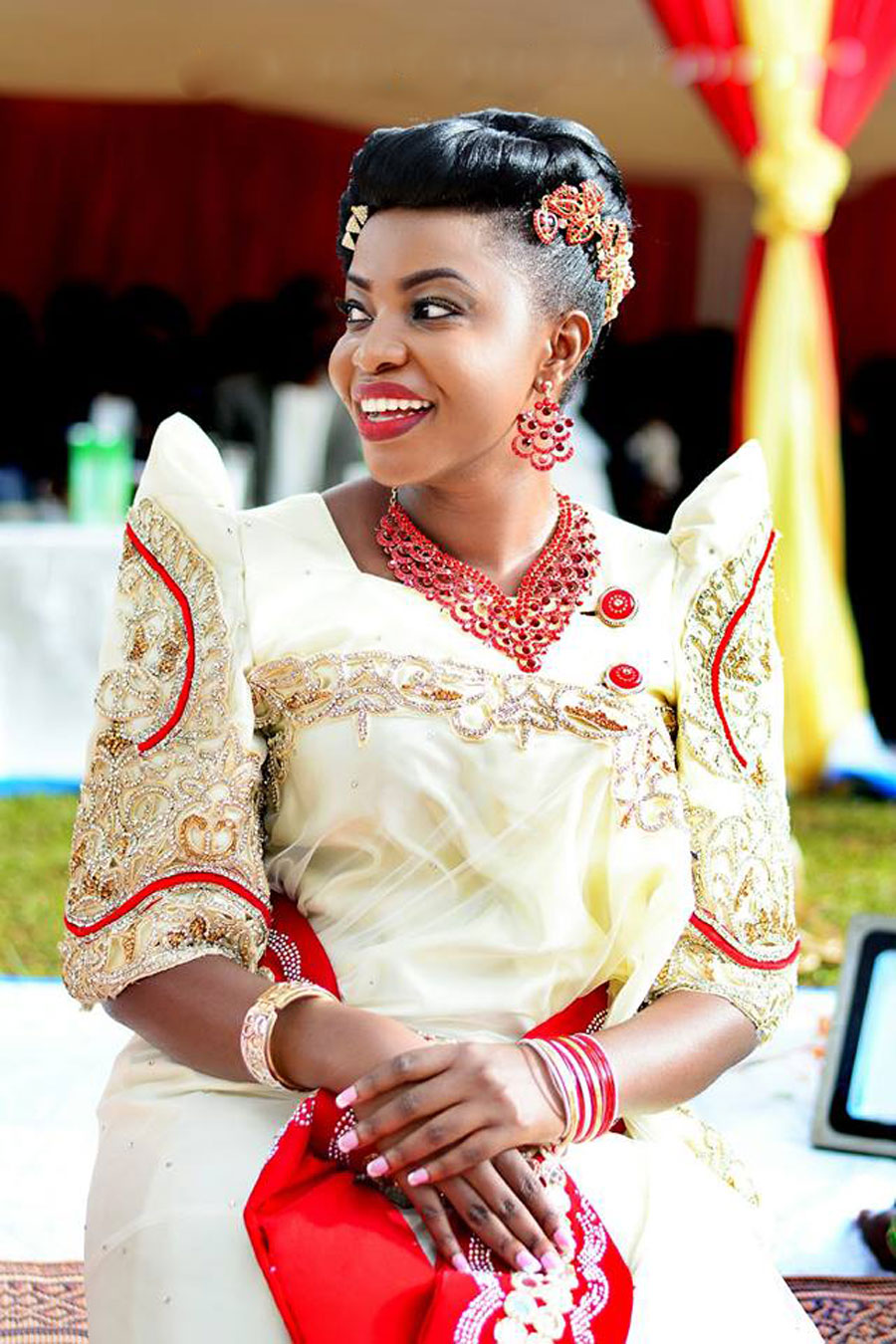 For an outfit to make a statement, it needs to be beautifully accessorised. These little accessories like jewelry, veils, crowns, just make the outfit stand out more. Twikirize says when it comes to these details, it is better to always link them to the outfit because small mistakes like mixing silver and gold jewelry can completely spoil a look.

Twikirize also adds that when it comes to accessorizing a gomesi, the belt should be matching with the least color in the gomesi, this also applies to the veil for the Muslim brides. Atwiyah says if the bride is to have a veil on, it should match with the belt of the gomesi. This helps to avoid being too colorful which makes the bride look weird.

For the custom made outfits, Flavia says it is better to let a professional choose the lining, and buttons for you to avoid messing up a beautiful piece. 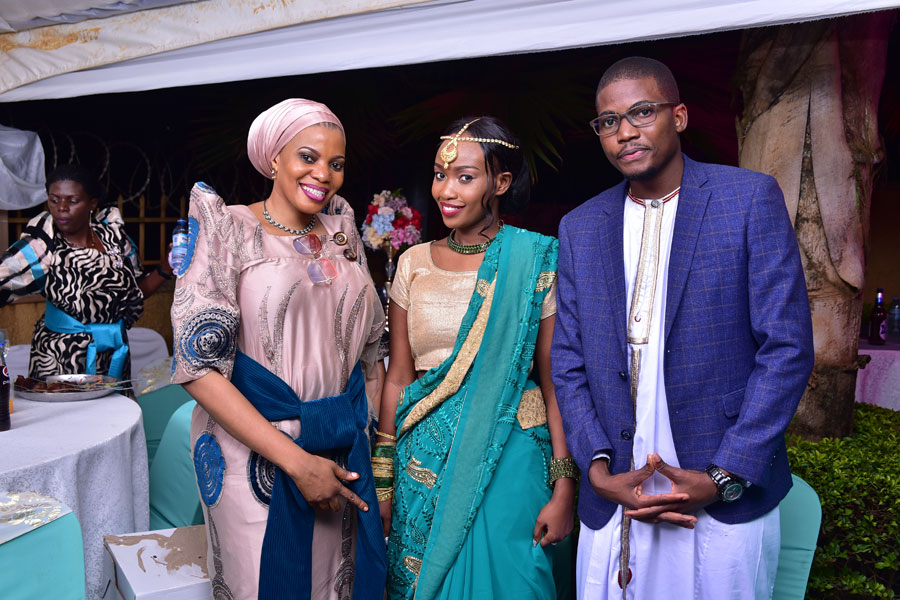 According to Atwiyah, the mistake most brides make is to mix a number of traditional attires during the ceremony which isn’t right.

“Mixing cultural outfits is something that has been adopted of late but it isn’t right. The only time a person should wear two different traditional attires is if they are marrying someone of a different tribe. That is when she can wear two different attires with one to honoring her husband’s culture and the other to honor her original culture.”

Flavia advises brides not to involve a lot of people when it comes to choosing a traditional outfit. It is better to move with one or two people that you trust will help you find the outfit that suits you best.