by Maria Immaculate Owechi
in Accessories
0

In this developed world where friends and relatives stay in different parts of the country or across the border, it is not an easy job to make phone calls to every invited guest giving the needed information about your wedding ceremony.

That’s why the wedding invitation card is significant for it’s able to summarise all the needed details on a page and can be sent either by hardcopy or softcopy via an Email or Facebook or even Whatsapp.

Apart from the colour, designs and font, it’s important for the card to be informative and the following are the most crucial elements shared by graphics designers on the correct wording of an invitation card and the important aspects to be included;

The hosts of the ceremony

Sophie Akweyo, a graphics designer at Unique Designers on Nasser road in Kampala explains that since the Ugandan setting has traditional and religious weddings, the information placed in both cards differs a bit. For example for an Introduction ceremony, the parents of the bride are hosting and thus only their names are placed at the opening paragraph of the card.

The family of Tim& Cathy Sekitooleko

with joy invite you to the Kwanjula ceremony of their daughter…

For the religious wedding, since it is the groom’s family hosting, his parent’s names are placed first and then the bride’s family follows after.

She adds that the hosts’ names have to be accompanied by a detailed description of the village, district and sometimes the sub-county.

If the parents are deceased, Akweyo says that they still place their names as the family of the late to honour their memory and for easy identification but if the client wants the invitation to carry the names of their guardian instead, then that can be done.

The family of the late Herbert Tumusiime and the late Joan Tumusiime of Bwera, Kasese

The family of Mr and Mrs Bart Muhimba of Luzira, Kampala cordially request the pleasure of

This year, My Wedding featured the story of Mr Moses and Mrs Julie Semondo who got married at Uganda Registration Bureau Services (URSB) on the Wednesday of 20th February 2019. 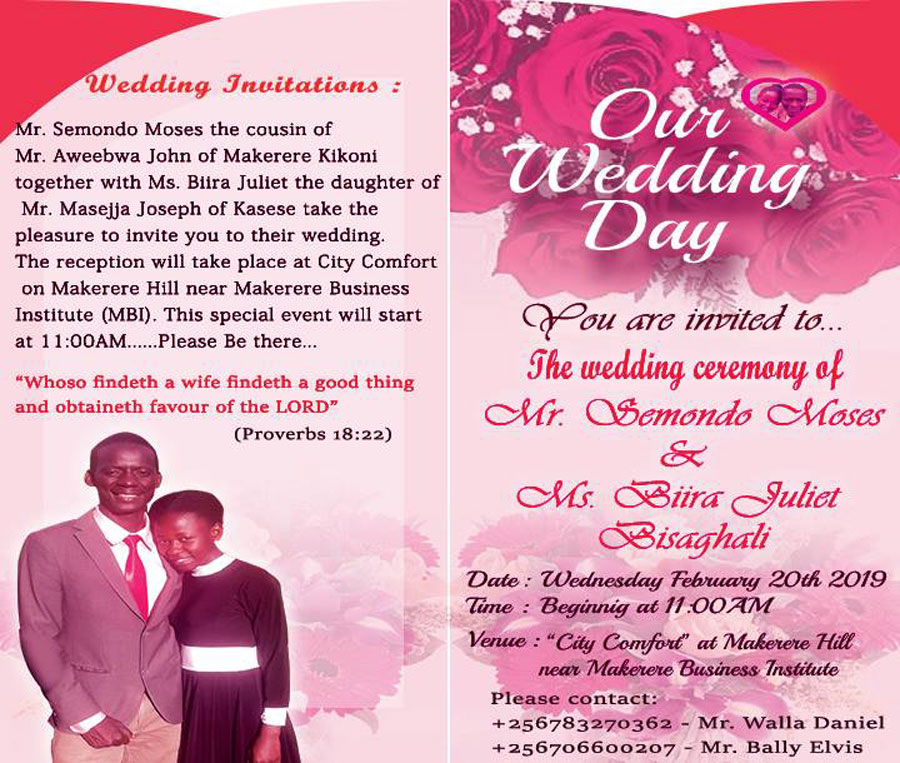 The groom shared that he wished he had followed the traditional ways of invitation more as the uniqueness of his card could have played to his disadvantage.

Semondo placed his cousin as the host rather than his parents’ names as expected because a section of the guests from Kikoni, Makerere who knew his cousin well and Semondo wanted them to attend.

When it came to his wife’s case, they only placed her father’s name yet also the mother’s name is also required with a detailed village and sub-county of the district placed.

“In case the parents are divorced, we include them both as hosts but put each name separately and avoid placing them together as Mr and Mrs,” Akweyo explains.

The groom and bride’s names are placed next to each other at the center of the page with a different font and in bold to stand out.

When it comes to the arrangement of the names, some prefer the groom’s name to appear first while others the bride’s name. Akweyo explains that whichever way you do it, the names should be arranged from the first, middle and then surname.

The names of the couple should follow the order used when stating their parents’ names above.

The family of the late Herbert Tumusiime and the late Joan Tumusiime of Bwera, Kasese

The family of Mr and Mrs Bart Muhimba of Luzira, Kampala cordially request the pleasure of

for the wedding ceremony of their children

She adds that for a traditional ceremony, they usually only place the bride’s name since the invitation is for her friends and family, but in the same arrangement of names.

After the names of the invited guests are placed which can be as an individual, a family or an organisation written as,

”With great pleasure we invite the company of…”

John Kaboggoza, also a Graphics Designer says it is important to clearly note down the number of guests that permits an invitation card in brackets after the name of the invited company, for example, the church choir (10 people).

Kaboggoza says this helps to solve complaints of couples who complain about a guest bringing the whole family along on a card meant for one person.

The date and time

Kaboggoza explains that whether it’s a traditional or formal wedding, they start with the day of the week, date, month and year followed by the time written as 12 noon, am or pm. 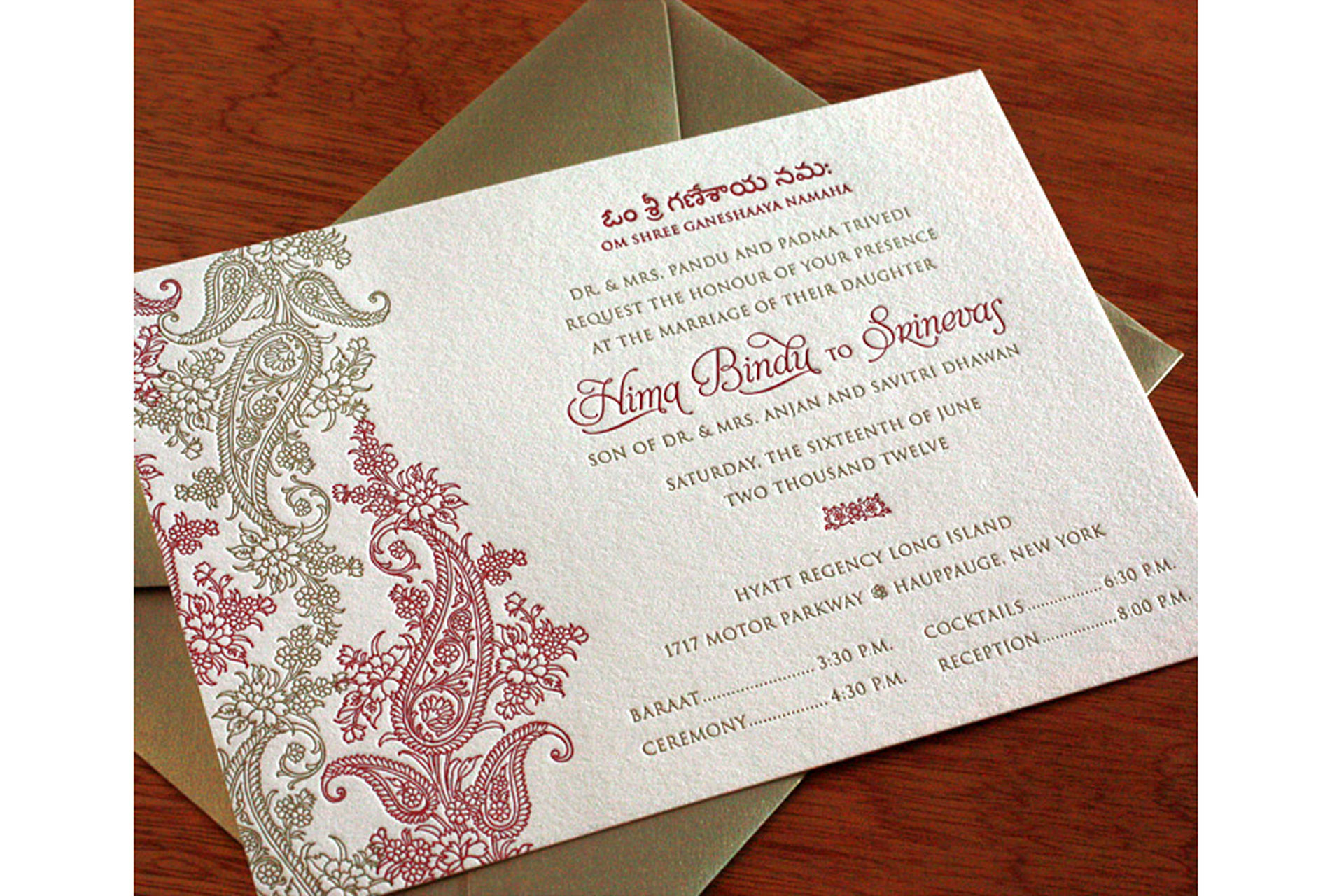 He adds that some couples only place the time for the church service and forget to place the reception time yet it is important to clearly stipulate them for someone who may not be attending the religious ceremony but wants to come for the part instead.

The religious and reception the venue

Akweyo reveals that since the religious ceremony is the first ritual, it has to be printed first and then the reception venue comes after.

She adds that a detailed map description to the venues is usually drawn behind the card t help people with directions.

Additional information like dress code for the function especially when it comes to traditional ceremonies where a family may want guests to respect their culture by wearing traditional outfits can be added to the card. 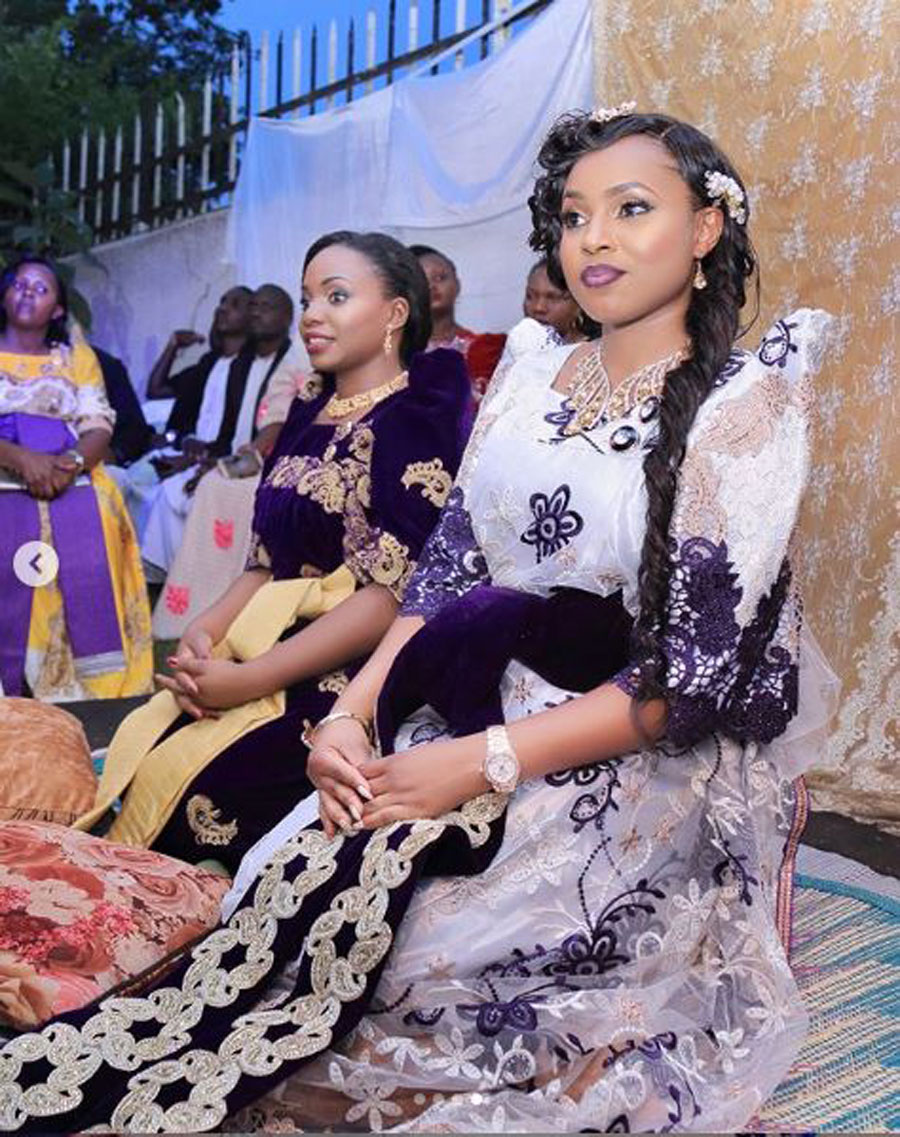 In this section, guests are usually also reminded to carry along the invitation card if the cards limit people. A note can also be added if it’s an adult only function and children are not welcome.

The card can be translated to another language

For a section of guests who may not be able to read and understand the formal language, there is space that can be created for the invitation message in their local language.

RSVP which stands for the French phrase “répondez, s’il vous plaît” which literally translates “respond if you please,” serves as the contact lists and email addresses of two or four people that can be contacted in case they need more information about the function or want to respond if they are attending the event or not.

Akweyo advises couples to select people who are closer to them and know them very well as points of reference. And most importantly they should be available, able to receive phone calls at any time and energetic to leave the function to go and pick up some guests who may be failing to trace the venues.

As a couple, you may prefer to be casual and unique in your invitation. This is acceptable and can be refreshing as long as the card has the important aspects of what is happening, who is inviting them, where the event shall be and when. 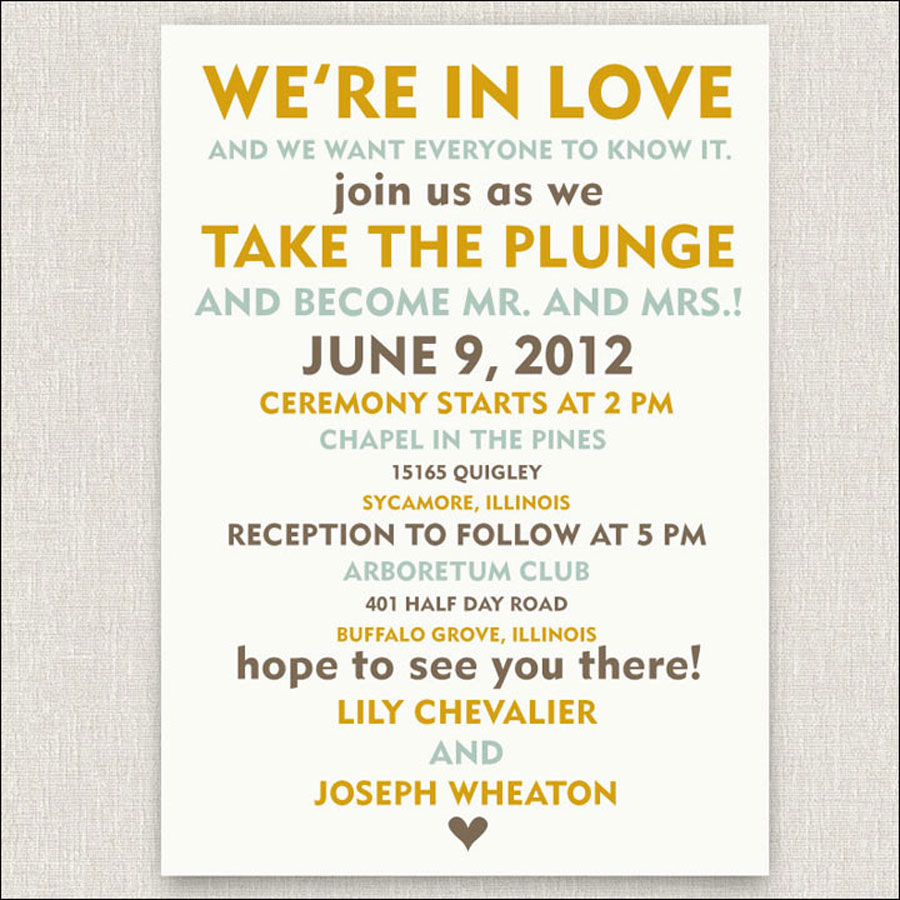 You can also add a quote from the Bible or a famous quote that resonates with marriage and speaks to you as a couple at the bottom of the invitation.

Remember, it is the wedding invitation that gives a picture of what the guests should expect at your wedding ceremony and if insufficient information is provided, it creates an impression that you are not organised.

Our honeymoon will be on wedding anniversary